Dutch Catalina's during the war in the Far East 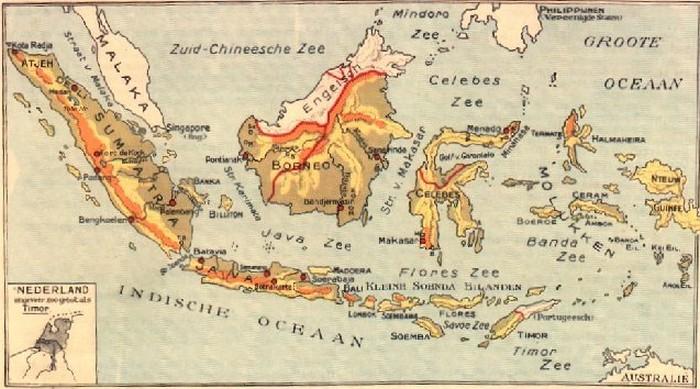 Former Dutch Indies Colony , over 1,000 islands and much larger than The Netherlands

The German occupation of The Netherlands, in May 1940, abruptly stopped the supply of maritime patrol aircraft to the Dutch Indies. Only a little over a third of the license built Dornier Do 24s on order had been delivered, leaving the defence needs of the East Indies unfulfilled. It therefore became a matter of urgency to find an alternative. Since the Allies were already operating the PBY, in the area and the MLD (Dutch Naval Aviation) had shown interest in the PBY as early as 1937, the choice was quickly made.

After much negotiation, an order for 36 PBY-5 flying boats was placed, quickly followed by a second order for 12 PBY-5A amphibians.

The first two flying boats, bearing the registrations Y-38 and Y-39 were delivered in September 1941. The delivery went smoothly. But subsequently, Y-50 was damaged at Wake Island during its delivery flight, necessitating a return to the factory for repairs. Y-68 was at Pearl Harbor during the Japanese attack on 7 December 1941, and was destroyed. Y-69, en route to Pearl Harbor, was confiscated by U.S. authorities.

The Japanese attack cut the supply route, and a new route was planned through Africa and West Asia. By this route, Y-50 and Y-71 to Y-73 arrived at Surabaya. On 15 October 1941, Y-52 to Y-54 were handed over to the RAF in Singapore to bolster local defences. They were assigned to RAF 205 squadron.

The American navy squadron VP-22 was meanwhile stationed on Central Java in Tjilatjap with its own American Catalina's in March 1942. VP-22 than went to Ambon January 11, 1942. Furthermore, a number of naval men succeeded in making an abandoned PBY-4 of VP-22 flyable again, gave it the unofficial Y-3 number. Five MLD Catalina's joined VP-22 in January 1942. VP-22 suffered big losses and February 1942 evacuated to Darwin in North Australia and the 5 MLD Catalinas went to Rathmines (and than transferred May 1942 to Ceylon). VP-22 itself then probably went to South Australian Perth.

In April 1942 a decision was made to establish a Dutch Naval squadron on Ceylon, under RAF control. Equipment consisted of the resident PBYs with the addition of the remaining 5 in Australia, which were flown to Ceylon. The unit was officially established at the end of May as RAF 321 squadron, part of 222 Group Coastal Command. Additional planes arrived, beginning with PBY-5A Y-74, followed by the remaining 11 amphibians on order in October. These PBYs were equipped with radar. Unfortunately Y-75 hit a rock on arrival in China Bay and sank but could be repaired. It was subsequently used as a passenger transport with the name of ‘Sky sleeper’, transporting VIPs.

Because of a threat by a Japanese raider, from 11 October to 1 November 4 PBY-5As were based at Mombassa, Kenya. Nothing was found, however, through lack of radar assistance. On 8 November the operational strength was reduced to only eight aircraft when Y-71 was lost on a test flight.

From 15 December, 4 PY-5As were based at Ratmalana, Ceylon. Besides the routine patrols, special missions were flown for intelligence groups. Early in 1943, activities by enemy submarines near the Cape of Good Hope prompted a detachment of 6 PBY-5As and 3 PBY-5s to South Africa. The amphibians went to Darlin and St Albans, the flying boats to Durban. The Durban detachment lasted until 8 April, after which the planes returned to Ceylon. At the end of May, the detachment at Darling was hit by a storm and moved to Brooklyn Air Station. The detachment was disbanded on 19 September, the planes going to the island of Socotra off the coast of Yemen where they were joined by the detachment at St. Albans. Socotra was disbanded on 30 December 1943.

In June 1943 two new PBY-5As, Y-86 and Y-87 replaced the old Do24K, the X24, with the MLD detachment in Australia. Based on photographs and other information, it is thought that these planes wore RAF camouflage. Y-86 moved to Ceylon in July. On 25 August, Y-84, coded ‘S’ was lost after a forced landing when it ran out of fuel.

After the Japanese surrender, the registration system was changed, Catalinas were re-coded ‘P ‘. Still later, numbers were used instead of letters, and the Catalinas received the number ‘16’ (P being the 16th letter in the alphabet).

The last Dutch Catalina was phased out in 1957.

FOR Photos:  look at the Dutch texts

FOR REGISTRATION DETAILS:  look at the table on the Dutch page