THIS IS A SUMMARY IN ENGLISH ABOUT THE B-25 USED BY DUTCH MILITARY SERVICES. 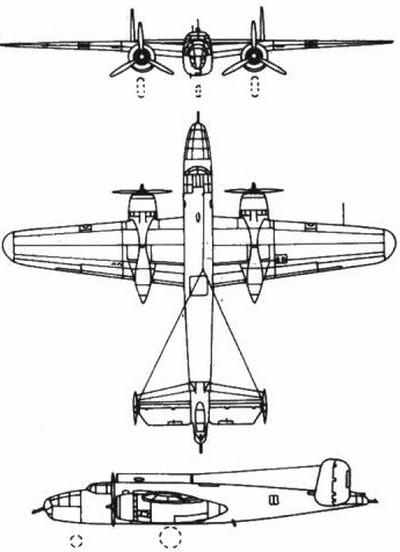 Medium US bomber of North American Aviation of which almost 4400 were built between 1940 and 1945. The prototype flew for the first time in August 1940. Many different versions were developed.

The US Army Air Corps saw the need to issue specifications for a new twin engine bomber. In 1939 North American developed model NA-40, followed in June of that year by model NA62, which would eventually become the B-25 Mitchell. The NA-62 differed significantly from the earlier NA-40.
The USAAC ordered the first Mitchells directly from paper due to the increasing tensions in the world. (At the same time, also bombers were ordered from the Glenn L. Martin Company , which became the B-26 Marauder.)
The first B-25 flight took place in August 1940. This model still had a straight wing form. This was changed in the B-25A to a gull shaped wing. This model also introduced self-sealing fuel tanks. The
B-25B introduced two gun turrets. The B-25C became the first major production model.

North American B-25C
The first B-25C contract was signed on 24 September 1940 covering 863 planes with the internal designation NA82. This was the first model that really went into mass production.
Externally, the B-25C was almost identical to the B-25B. Differences were the introduction of the R-2600-13 Double Cyclone engines with Holley 1685HA carburetors replacing the earlier Bendix Stromber PD-13E-2 units. The Bendix units were easier to maintain, but needed a more careful deicing procedure. Other changes included systems for the prevention of ice formation and deicing; a Stewart-Warner cabin heating system located in the left wing and a change of the electrical system to 24 volt.

The B-25C also introduced a new type of tail bumper. The earlier version of a bumper with a spring system was replaced by a massive bumper that was used in all following models. The exhaust pipes were shortened.
The B-25C with fiscal-year-numbers from 41-12434 through 41-13176 were equipped with two 0.303 inch machine guns in the nose. Starting from serial number 41-12817, a small transparent blister was added to the cockpit roof for use by the navigator. Around that same time, the gun turrets were changed to models of Bendix Amplidyne and also provisions were installed for external fuel tanks with a capacity of 304 US gallons. (Photographic evidence of these tanks has so far not been found.)

North American B-25D
A factory in Kansas City was leased by North American Aviation for the production of B-25 Mitchells. The Fisher Body Division of General Motors Corporation was designated as main supplier. The first order of 1200 B-25D’s (NA-82) was granted on 28 June 1941. North American Inglewood manufactured and supplied the parts for the first 100 B-25D’s from Kansas City.
The first two B-25D’s were delivered in February 1942. From B-25D serial number 41-29748, Fisher supplied the outer wing panels, fuselage panels, control surfaces and windows to Kansas City.
The B-25D was almost identical to the B-25C and many of the innovations that were introduced on the B-25D production line ran in parallel with those on the B-25C production line in Inglewood.
On B-25D’s with serials from 41-29648 through 41-29797 the two 0.303 inch machine guns were still used. After that they were replaced by 0.50 inch machine guns.

North American B-25J
The B-25J (NA108) was the last production version of the Mitchell. This version saw the highest number produced: 4318 planes. The production only took place in North American’s factory in Kansas City. This plant did produce for a short time both the B-25D and the B-25J: the first J was delivered in December 1943, while the last D was produced in March 1944.
With the J, production returned to the function of medium bomber with armament in the tail (with heating this time) and from the sides and with the forward moved dorsal turret as introduced on the B-25H. The doors of the bomb bay and the bomb racks were now operated electrically. Three 1000 pound bombs could be carried. Alternative loading consisted of two 1600 pound armour piercing bombs or six 325 pound depth charges carried under the wings. The transparent nose was re-introduced for the bomber version. This could be replaced on the production line with a solid nose with eight 0.50 inch machine guns. With these modifications, the planes were given the factory designations B-25J-11, -17, -22, -27, -32 or -37, depending on the production blocks.

Dutch Military usage
During the war, the Dutch military used Mitchells from England (No.320 Squadron), during training in the USA (RNMFS Jackson) and in the Far East (Australia).
After the war, the Mitchel was used by the ML-KNIL in the East and by the 320 Squadron of the MLD in The Netherlands.

This translated article by Ronald van Voorst was first published at this IPMS NL website September 2017 (based on articles of M.de Vreeze and W. Jonker)

(C) Text and Contents: strictly copyright IPMS NEDERLAND; no part may be re-used without written permission