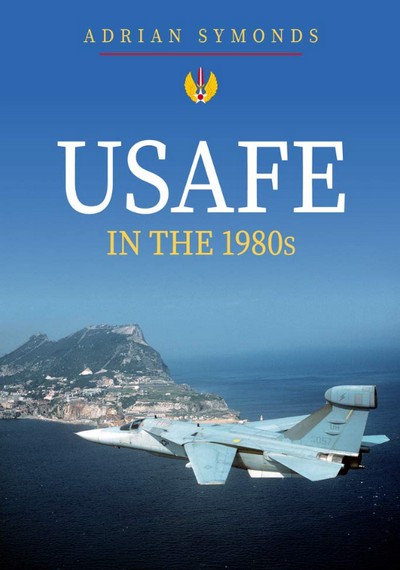 On the front line of the Cold War, during a decade that saw East-West tensions - and budgets - rise considerably, the United States Air Forces in Europe reached the peak of her power during the 1980s. Not only did USAFE expand, but it introduced a generation of advanced new types, developed to counter perceived Soviet advances and often in light of America's still recent, and often bitter, experiences in Vietnam. Eagles, Fighting Falcons, and Warthogs joined the ranks in increasing numbers, supplementing still considerable numbers of older stalwarts like the mighty F-111 interdictors and the iconic Phantom, which lingered on in specialized reconnaissance and defense suppression roles. But it was not all fast jets; Ground Launched Cruise Missiles were introduced, plus a range of support types including tankers, transports and spy planes deployed from the Stateside Commands to support USAFE. Take a step inside the day-to-day operations of the USAFE in the 1980s.

In the Netherlands, we probably know the USAFE (United States Air Force Europe) best from the cradle of our own air force, Soesterberg, where the 32nd TFS (Tactical Fighter Squadron) had its home base during the Cold War. The American presence dates back to 1954 and of course attention is paid to this in the book. However, the USAFE was mainly present in Great Britain and West Germany, but also Spain, Iceland, Turkey and Italy. The book elaborates on the NATO Command organization with regard to the USAFE, and of course the threat of the Warsaw Pact.

The book certainly meets the expectation to go deep into the USAFE, its organization, weapons, aircraft types, the armament, and airbases during the 80s. The aggressor squadrons are certainly not forgotten but also the U-2 and SR-71!
The various squadrons with everything that goes with them are discussed. The many exercises and meetings in this period are also mentioned.
Do not expect new spectacular photos, from private archives, official public sources are used, which does not mean that no interesting photos are shown.

Conclusion
I enjoyed reading the book, especially because it describes a period in which I was very active as an aviation journalist. Both in England and West Germany I have been able to visit many bases. It was also the central time of my military service.
It gives an excellent representation of "The American Air Forces in Europe" with the complete organization not specifically focused on, for example, a specific type of aircraft, during the Cold War period.
Two Appendices complete the book, one on the Structure of the USAFE, the squadrons etc. and the second on the USAF structure in 1989.
Highly recommended for those who are interested in the Cold War and especially the USAFE, but certainly also for people who want to take in this piece of history in combination with the complete history of this special period in history.
Recommended!

Adrian Symonds has been fascinated by military history, especially military aviation, since childhood. No doubt, frequent low-level RAF and USAF jets flying over his native Worcestershire during his youth planted the seeds of his ongoing passion for the subject. He has extensively studied the histories of the world’s air forces.
Other books by this author are:
ANG in the 1980s
SAC in the 1980s
TAC in the 1980s

Thanks to Amberley Publishing and Adrian Symonds for this review copy.

this article was published by webmaster M. de Vreeze January 2023