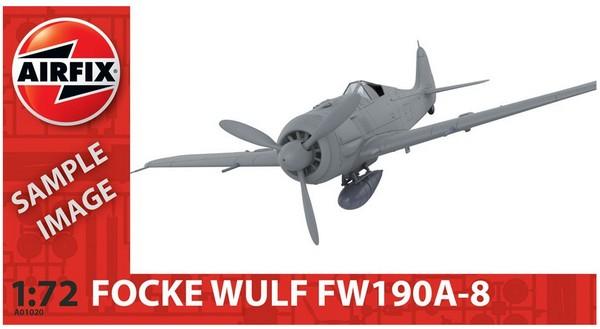 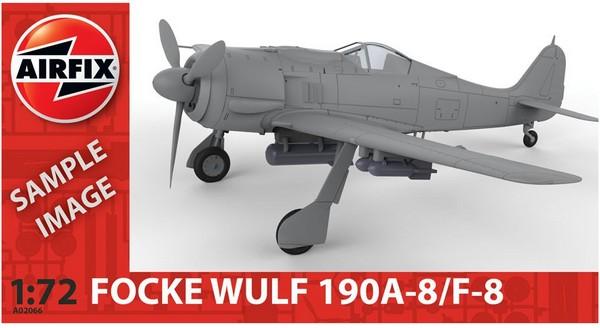 The Focke Wulf FW190 doesn't need any introduction with aircraft enthousiasts. It was one of the best fighter aircraft in World War Two. The version with BMW radial engine built in large numbers is the FW 190A8. A fighter bomber was derived as well, the FW 190F8. Throughout the years, many models have been issued. Airfix issued the first A8/F8 in the seventies. Back then, it was a nice model, currently it leaves a lot to be desired. Apparently, Airfix had the same opinion, because a new kit, in two versions has been announced for his year.

At the end of April 2013, IPMS Nederland received a testshot of this new kit directly from Airfix / Hornby for an exclusive preview! 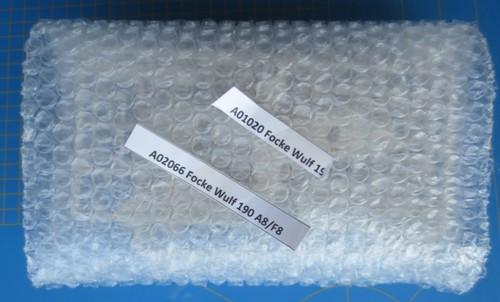 The airpocket plastic bag received contained 4 white sprues and a separate bag with the transparent parts. A manual and decals for this testshot kit were not yet available so were not included. 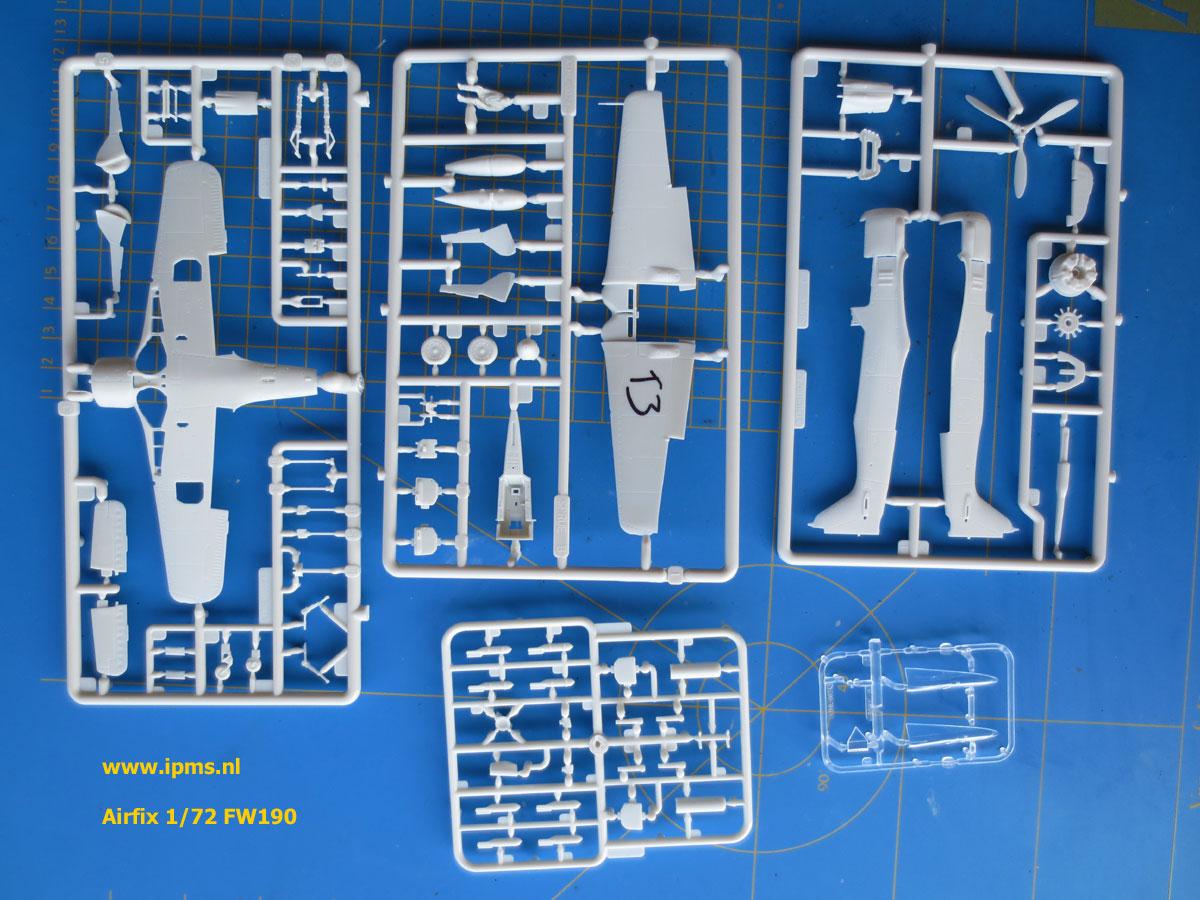 The transparent parts are very clear. The sprue contains windshield, visor and two nice thin canopies. The "standard" version is for the A8 canopy and the bulbous one is for the F8 version. Both canopies are complete with their framing so they can be positioned open.

It is expected that the little sprue E will be the difference between both boxings (A01020 and A02066) with regard to the plastic parts. It contains an alternative headrest, bombs, lower wing hatches without cannon bulges and two closing pieces for the wing leading edge. To enable the bombs to be carried, the outer cannons in the wing were removed for the F8 version. Sometimes, the guns in the fuselage were removed as well. The droprank of the A8 version is present on one of the other sprues. 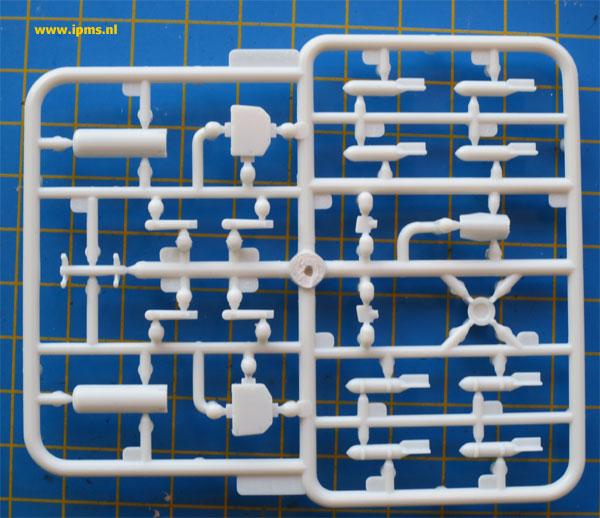 The other three sprues will probably be common.

All sprues are moulded nicely, though a little bit of flash is present here and there. Probably some additional tweaking and clean-up of the moulds will be executed before release.

In common with other recently released Airfix kits, the parts have fine panel lines, present much detail and exhibit original solutions for the construction.
For example, not only the lower wing halves are moulded as one part, but also the upper ones. They are connected by the main wheel bays. They are integral just like the real aircraft. This way, correct wing dihedral is ensured. The wheelbays contain nice detail.

The pitot tube is moulded onto the left wing and is vulnerable. The blast tubes of the inner wing cannons are separate parts. The bulged panels of the outer wing cannons are separate parts. Holes have to be drilled inthe wing surface to accept them. The ailerons are moulded to the lower wing half and the flaps are moulded to the upper wing half. A shallow sink mark is present here on the test shot. Remarkably, the wing trailing edge is a litlle bit on the thick side. It is not really annoying. By the way, the tailplanes have thin trailing edges. 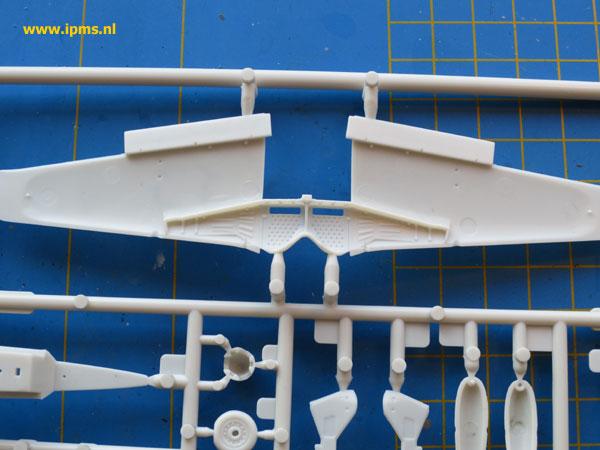 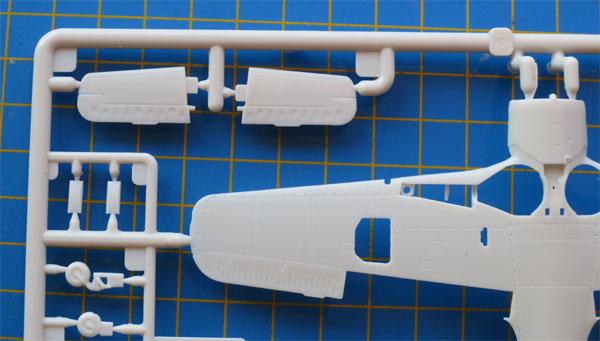 The fuselage contains a good cockpit, build up from a tub with surface details, rudder pedals, control column and a plain instrument panel. The latter part will undoubdly receive a decal. The fuselage sides have some detail as well. The seat is plain but receives a pilot which is common practice with Airfix.
The tailwheel is connected to the fuselage with a strong lip. The rudder is a separate part. 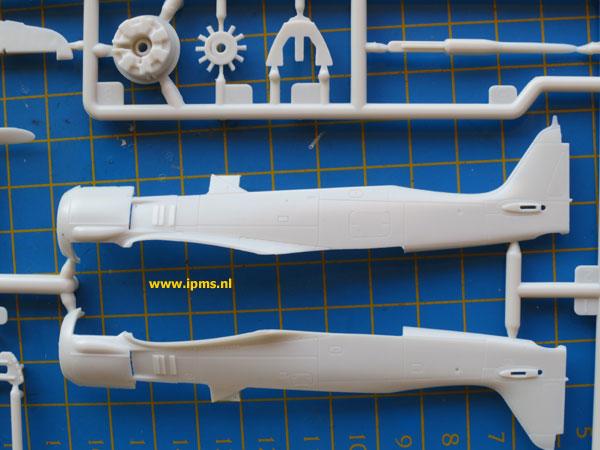 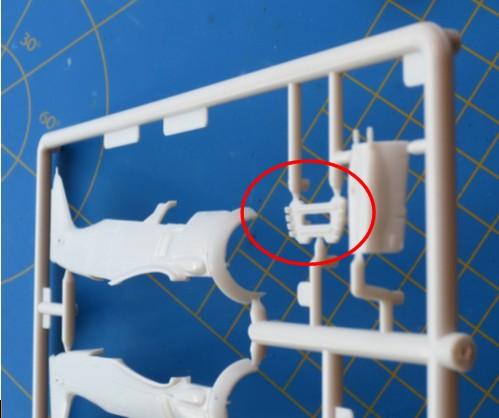 The linen effect on the control surfaces is represented by shallow dimples. On this testshot, the depth is a little bit uneven. In front of the cockpit, separate panels are present for the fuselage gun cover and for the clearances for the gun barrels. This means other variants are possible in the future.

The wheels have flattened tyres and only one positon on their legs is possible. It seems that the landing gear legs have strong and foolproof attachment points to the wing. Which is rightly so with regard to attitude of the undercarriage legs on the FW 190.

I made a quick check of the Airfix parts looking at pictures and some drawings. I can confirm that Airfix did their homework. The model is very accurate.

To check the fit of some big parts, I detached them from their sprues, using a razor saw. Also on this kit large sprue attachment gates are present in places, so be careful. 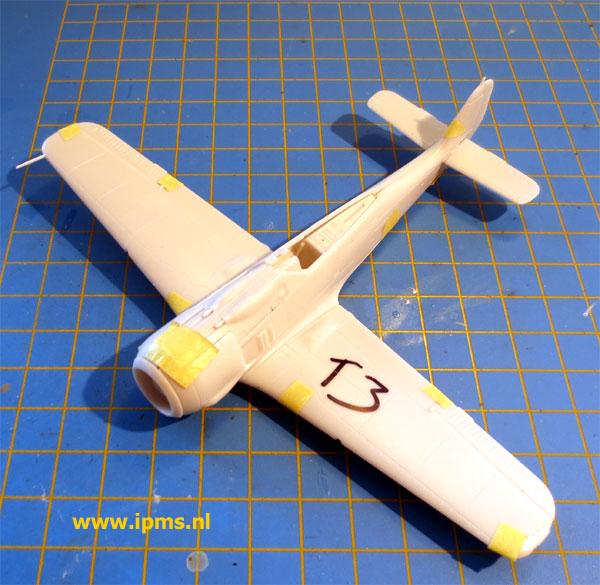 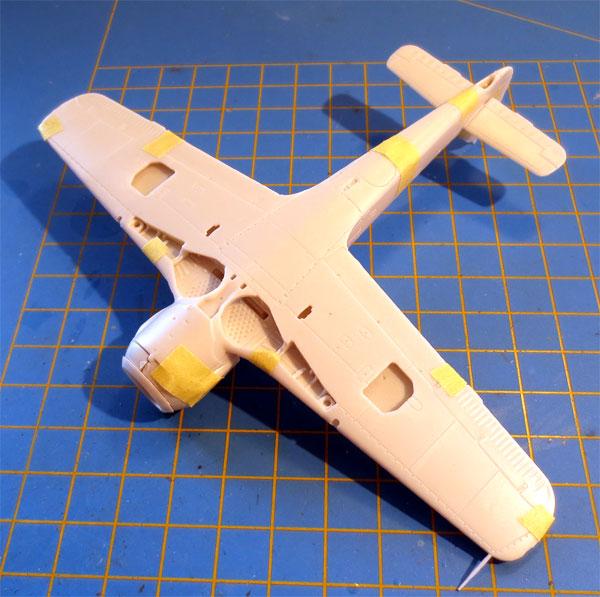 On the fuselage, the sprue attachment gates are located at the bottom (smart), however partly on the outer surface but also partly on the mating surface (not so smart).

Excess plastic is removed quickly with a small file. Generally, the fit of parts is very good, with exception of the panels in front of the cockpit. Maybe this will be improved prior to market release.

Finally, I compared the model wit her little sister from Revell in 1/72. The engine, prop and cowling are assembled in a similar fashion. Both kits agree on most import dimensions and ratios, so that is encouraging. The only difference is found in the shape of the ailerons. Those of Revell kit are not right, the chord at the location of the trim tabs is retained towards the tip. The ailerons of the Airfix kit are correct.

Conlusion: It seems Airfix is having a winner again in the form of a correct, detailed and cheap FW 190 A8/F8 in scale 1/72.
Airfix will release this kit I hope soon and it will be welcomed by many modellers.