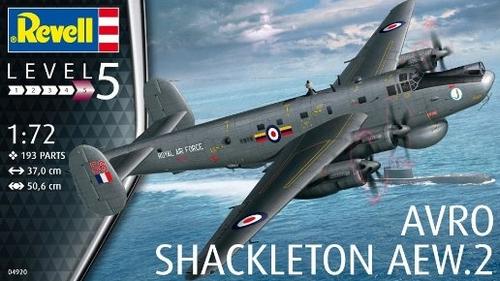 A big thank you to Revell Germany for providing IPMS Nederland with this test shot.

Revell Germany has provided IPMS Nederland a test shot of their forthcoming Avro Shackleton AEW 2 kit in 1:72 scale. This is a brand new tooled kit.

I have made a quick overview of the parts for the worldwide modelling enthusiasts. A full modelling report is planned for the first issue of 2016 of the IPMS Nederland magazine "Modelbouw in Plastic".

Please note that the Revell Shackleton AEW kit release is planned for beginning 2016 and the final kit may differ from the test shots seen here. Also, I only had sketch instructions but also this kit will get the new style modern instructions from Revell.

There are about 200 parts in this kit. The panellines are very fine with nicely engraved rivet detail. 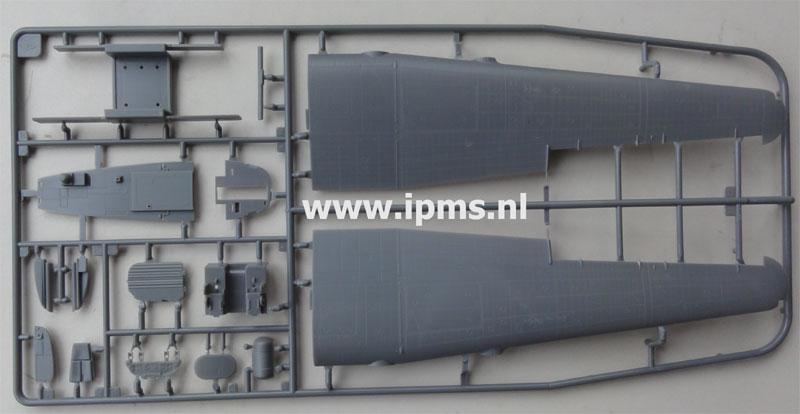 Sprue A contains the upper wing halves, a spar box and parts like the cockpit flight deck floor, bulkhead and rear compartment floor. The main instrument panel has fine details with the rudder pedals moulded in one piece. The nose part 41 is for the "closed nose" (without the 20 mm canons as used in the MR2). On the outboard wing there is a slight dihedral and the ailerons are separate parts. 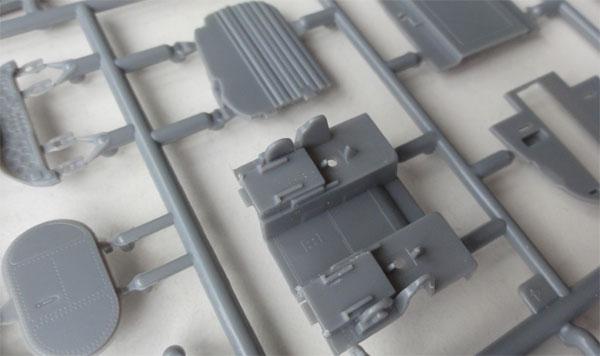 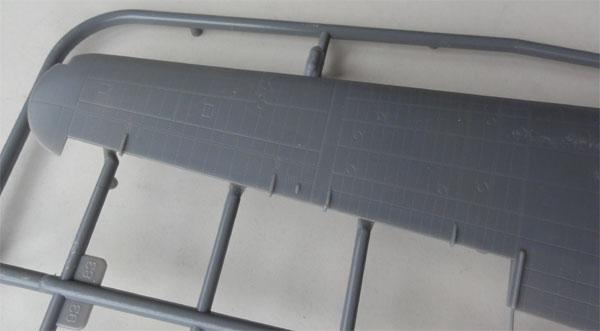 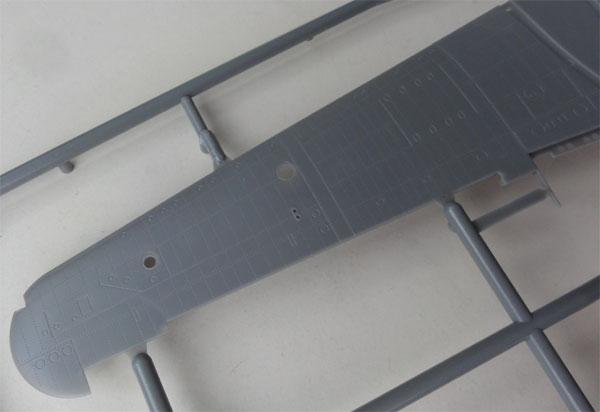 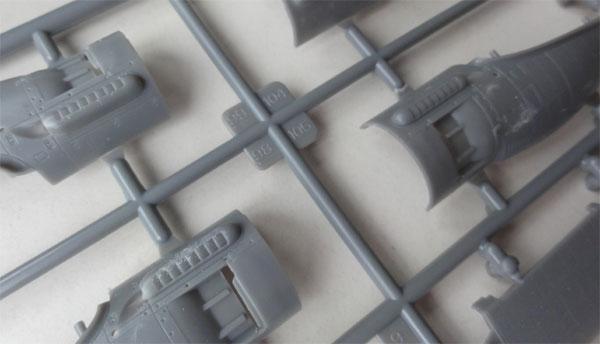 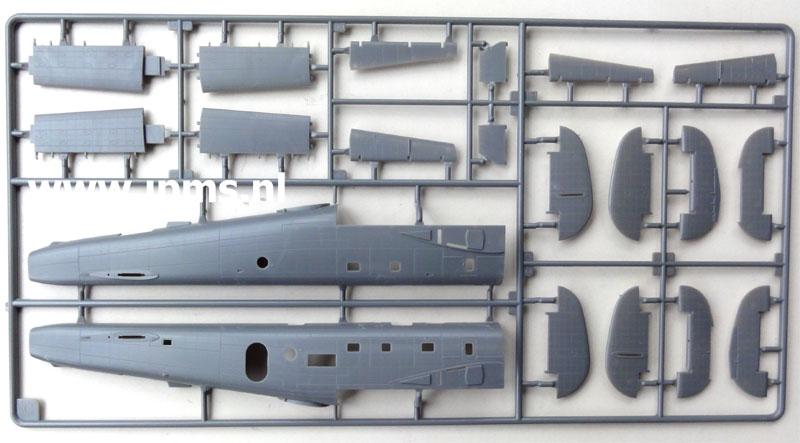 Sprue C has first the rear fuselage halves with also the rear tail wheel bay. The rear cabin entry door is separate and can be set open. Inside this area some details are presented with a floor and stringers and frames moulded inside the port fuselage half. The cabin windows are also seen (inside are recesses to get a few "strips" with the clear parts). There is also a larger starboard window in front of the entry door. Some holes need to be opened up with a fine drill to align some typical fairings and antennas of the AEW. Also in the sprue are the vertical tailsurfaces with obviously nice separate rudders. The horizontal tailplane with separate nice elevators are also seen. (It seems it has the correct horizontal position and dihedral). 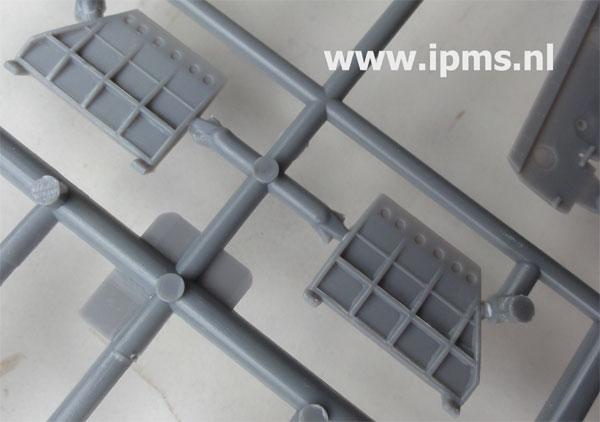 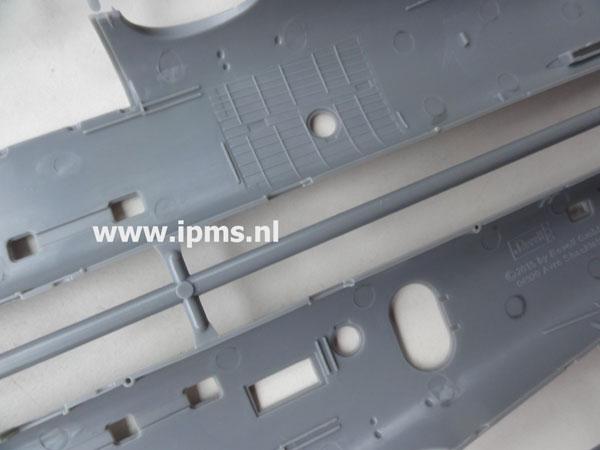 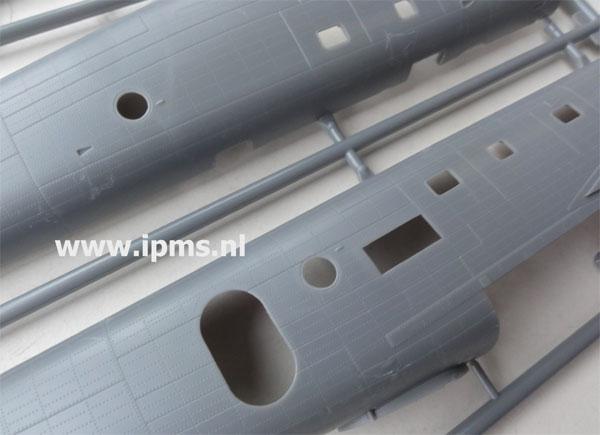 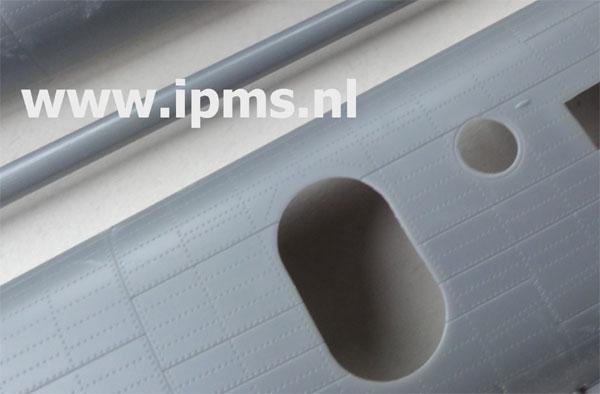 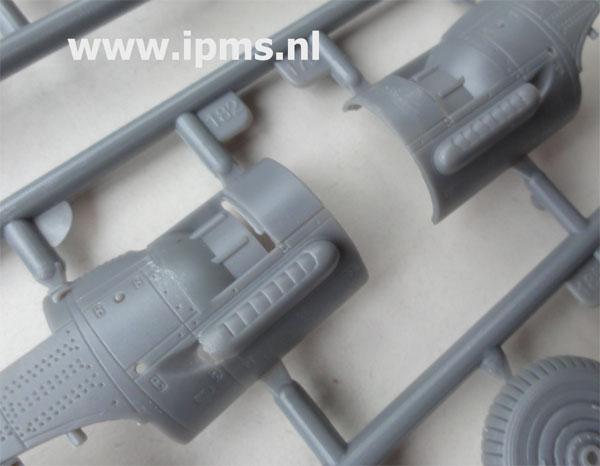 Sprue D of which 2 are provided has first the inboard nacelles with also the landing gear bays. Inside the bays, nice details of frames and stringers are seen. The bay is enclosed with a rear and front detailed bulkhead. These nacelles fit the lower wing. The gear doors have nice detail inside as well. The main wheel is in two halves with tyre pattern. The big strut and braces are also here and each wheel should be "snapped" in its strut. It looks a bit vulnerable. 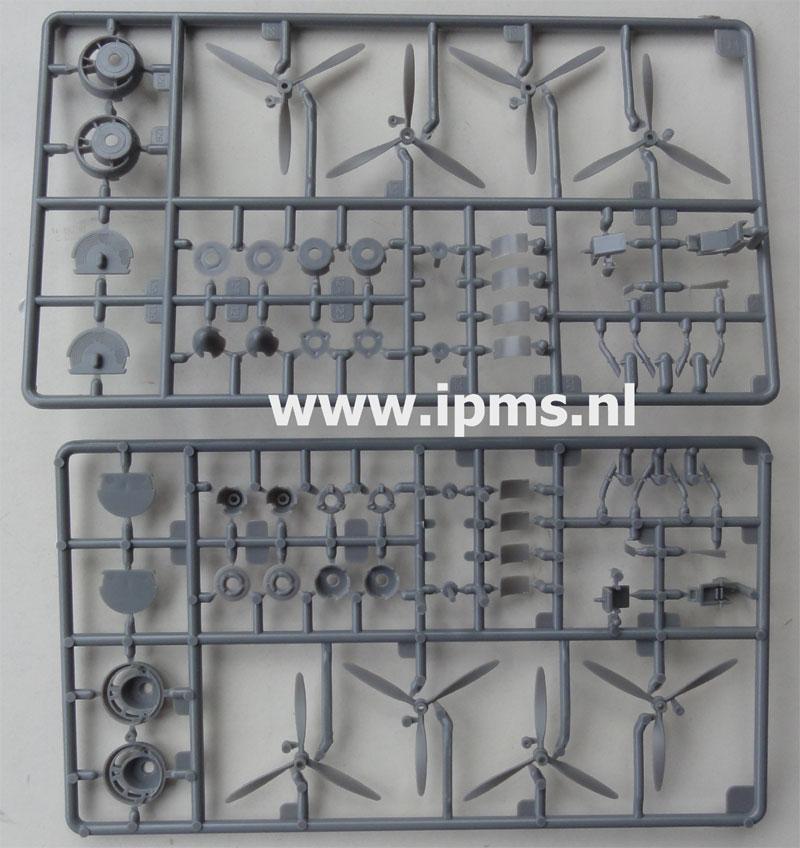 Sprue E of which also two are provided has first the sets of counter rotating propellers, each of one piece and their spinners. The propeller blades look a bit "thin". The front nacelle ring intakes are open and also separate exhaust pipes are provided and what looks to be cowl flaps (that can be set open of closed it seems). A single piece pilot seat and another seat is also found in this sprue so adequate on two sprues for the main flight deck. 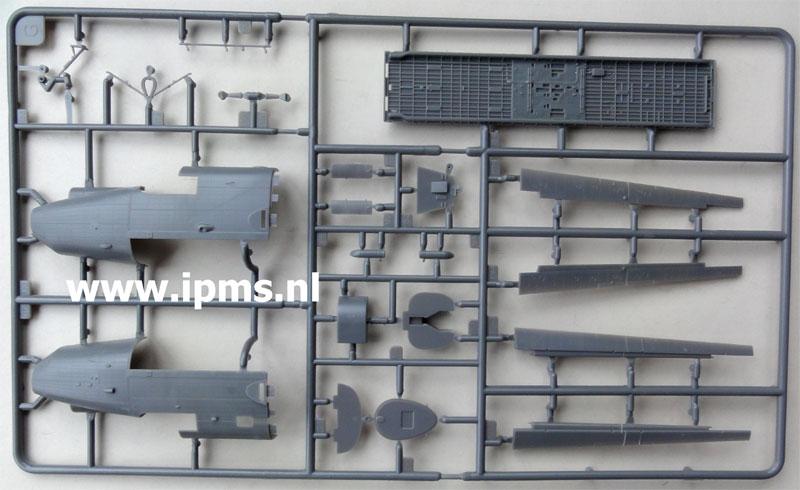 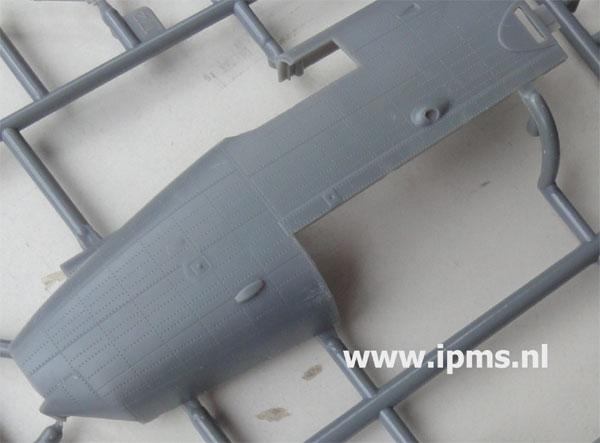 Inside of cockpit area: 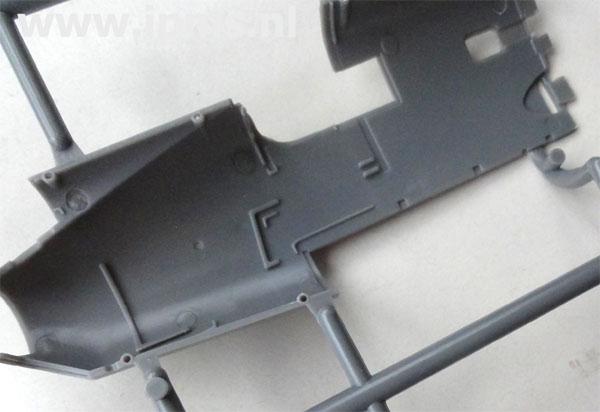 Sprue G has as biggest parts the forward fuselage halves. These halves are to fit the rear and mid fuselage with some small lips to strengthen the joint. Inside the cockpit walls there almost no detail. The rear tail wheel bay has details inside and the main floor of the bomb bay is there with nice roof detail (on top the wing spar box is to be installed). The ailerons are also found in this sprue. The sprue also has some external antennas and smaller bulkheads. 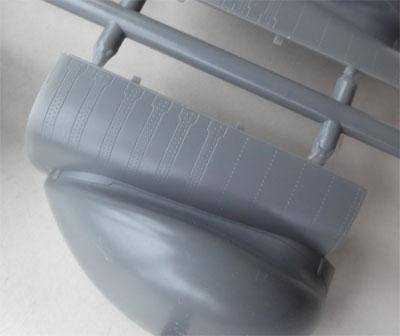 Sprue H has the main bay doors with nice fine rivet details inside and out. The typical forward lower An/APS radar dome for the AEW 2 is also seen here and it look goods. It will be positioned forward the bomb bay under the nose. 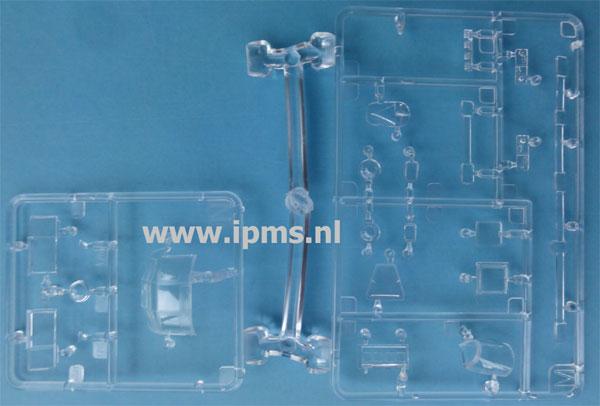 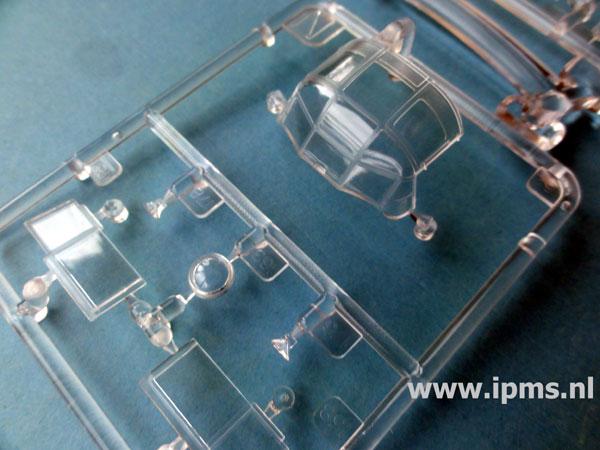 The sprues M and N were one piece with an "open quadrant". Maybe this indicates that the mould has room for an extra set of clear parts for other versions.

Sprue M has clear parts that look good and clear. The smaller windows are here (note that the large pointy rear dome is not seen on the photo's but is there). 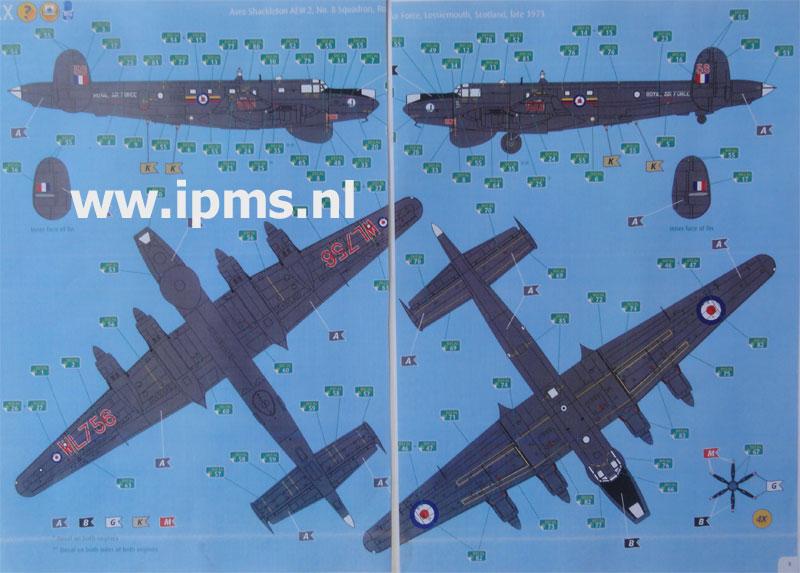 Decals provided with this test shot suggest markings for two Royal Air Force aircraft flown from Lossiemouth by no.8 squadron: an overall dark sea grey Shackleton with code "WL756" and nick name "Mr.Rusty" and "WL795" for the "Zebedee". (note that the drawing only shows here the first scheme, this is a test shot so not yet a complete package). 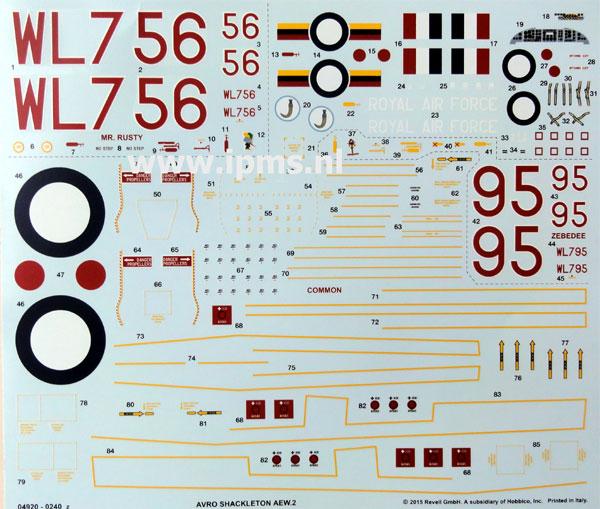 Common decals are for the Royal Air Force markings and these look good. The RAF style roundels "red dots" are separate avoiding "off center" printing, but the "blue" on the roundels looks a bit too dark. Also loads of stencilling are on the sheet including luckily a lot of yellow walkway lines.

This Revell test shot is for a brand new AEW 2 kit in 1:72 scale. These AEW Shackleton aircraft were based on re-furbished MR2 aircraft, a tail dragger with two rear small wheels. (the MR3 version had a nose wheel strut and newer systems and some slight changes like on the ailerons and fuel tanks).

The kit surface details are very fine with engraved panel lines and engraved rivet details. These would look good under a thin coat of paint and any seams and sanding will not really affect these engraved details.

The rear fuselage section of the kit has a floor and details and the cockpit looks busy as well with two seats and a forward nose station with a seat and a clear mid canopy window and a lower front window. But there is no specific AEW interior but obviously not a lot of that is seen from outside.

The large AEW radome fits into the forward "bomb bay" and the bay can be set open of closed. The various AEW antennas are also in the kit, sometimes it needs opening up the corresponding holes.

For better strength there is a sort of spar box to which the wing halves are fitted. For the fuselage various windows are provided as well including those in the "roof" with an astrodome. The counter rotating propeller can be turned and are fitted on each forward nacelle intake ring. The rear end of the fuselage has transparant cone with a clear bulkhead inside.

The sprue letters used by Revell suggest some "missing" sprues. It may be for future Shackleton versions of this kit like the MR2. Replacing sprue "H" providing some "full length" bomb bay doors as well as the 20 mm canon turret as well a few other parts would only be needed. And a new set of decals obviously.

As noted:  the Revell Shackleton AEW 2 kit release is planned for beginning 2016 and the final kit may differ from the test shots seen here.

I for sure will be looking forward to the brand new kit! I made the model end 2015 and a modelling report will be published in the IPMS Nederland magazine MIP 2016-1.

A big thank you to Revell Germany for providing IPMS Nederland with this test shot.

Suggestion: also check out our IPMS Shackleton AEW walk around....

this page was first published 16 november 2015 by IPMS Nederland 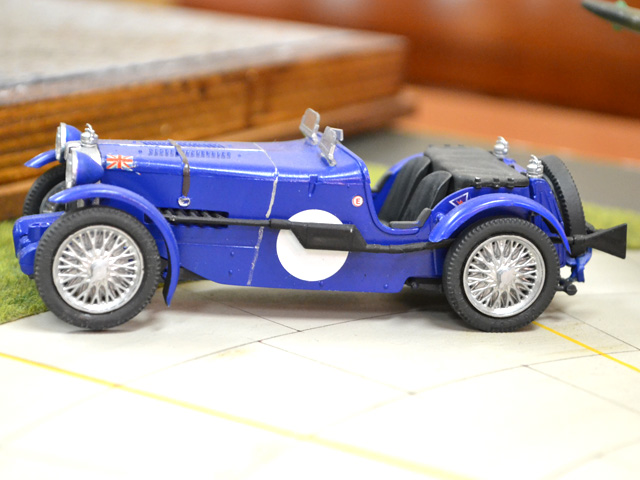