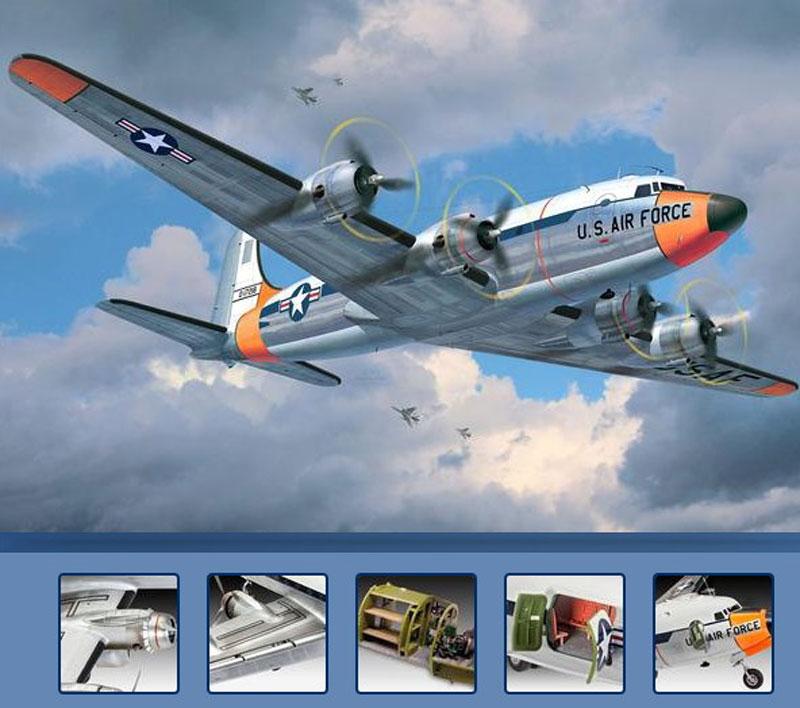 Thank you Revell for supplying IPMS NL with this exclusive pre-view model.

Translated in English by  Daan Mets

UPDATE: also comparison findings of the C-54 of Revell with the test shot

This model has been at the top of the wish list for many aircraft modelers, and they will not be disappointed! Revell announced this tool at the end of 2014 and the editors of IPMS Nederland received one of the test shots from Revell for them to review. An opportunity we of course could never refuse! This review has been updated when the production kit was received and built.

The C-54 Skymaster was, along with the renowned C-47 Dakota, one of the most important transport aircraft for the allies during and directly after the Second World War. It wasn’t until the 1970s that this aircraft would slowly be replaced by more modern aircraft for the transportation role. The plane was mainly used by the USAAF and the USN, but the RAF has had a few of which one was even the private plane of Winston Churchill. In the Netherlands, the Skymaster was primarily known as one of the first aircraft that was used by the KLM to restore its route network, until other aircraft types became available in the 1950s. Presently a C-54 can still be found on display in the Aviodrome museum in Lelystad. This particular aircraft represents a C-54A as it was flown by the Netherlands Government Air Transport (NGAT), with which the air route to the Dutch-Indies was restored.

The C-54 was based on the DC-4, a design for civilian operation which had been in development since 1939, but failed to reach the market because of the growing US involvement in the war. All 24 production DC-4, the first variant with a passenger door that was rounded at the top and an interior with chairs, were took over by the USAAF and rebranded C-54. For military purposes a version with a sturdy cargo floor and a larger cargo door would be a requirement which was met with the C-54A variant. This was followed by more variations, of which the C-54D would become the most produced type. Between 1942 and 1947, a total of 1245 C-54 would be built. This includes the DC-4 1009 variant, of which 79 would be produced for airlines after the war. Unlike the initial 24 DC-4 that were delivered to the USAAF, the DC-4 1009 would have a larger cargo door, but after the war a lot of C-54 that were converted to passenger service received smaller rectangular doors. After the war, Canadair built a series of C-54’s branded the DC-4M North Star which was equipped with Merlin inline engines.

One of the greatest moments for the C-54 was its role in the “Berlin Airlift” in 1948-49, when the Soviet Union cut off half of the city from the west, which left it to be supplied through air. This operation delivered the plane with the nickname ‘Rosinenbomber’, or ‘Raisin Bomber’. One of these planes is still displayed at the former airport.

All variants of the C-54A to M differ only on details such as engine type, power, tank capacity, electronic gear etc. On the exterior, typical features would be the astrodome, a radar nose, some antennas, wheel types, carburetor inlet fairings and the exhausts. However these would not be specific to a certain variation of the plane. One distinct feature of the DC-4 1009 are the inspection lights to check for surface ice on the wings, but as said even the cargo doors were still present on this type. The planes that were used by the KLM did have passenger doors and were actually converted C-54E and C-54G variants.

In the 1976, RarePlanes brought out a 1/72 vacuform kit of the DC-4/ C-54, which for a long time was the only available kit of this aircraft. Unfortunately, the shapes of the fuselage, wings and control surfaces left quite a lot to be desired. A few years later J&L did a vacuform attempt at an Aviation Traders Carvair. This represented a C-54 with a raised nose area in which two civilian cars could be transported. This was sadly not much of an improvement to the Rareplanes production. Then, early in the 1980s, a DC-6B was released by Heller which was a huge improvement in terms of the shape of fuselage and wings. When a C-118 version was released, for a time there was the hope that Heller would continue down this path and release a C-54. It didn’t arrive, but the French kit maker Mach2 released a version in the 1990s. It turned out to not be any better than the RarePlanes releases from the 1970s, and a difficult model to build. Modelers that desperately wanted to build a C-54 that looked the part would be forced to build a Heller DC-6B and convert it, which in itself was a do-able job. The author of this article has done just that, with the help of extensive technical reference material of which I was allowed to make photo copies at the DDA (Dutch Dakota Association).

In the popular 1/144 scale, it took until well into the years 2000 before Minicraft released a DC-4/C-54, but before that there had been a couple of resin and vacuform kits.

It took a while for this model to be released, but it has been worth the wait. Revell has clearly done thorough research to be able to produce a fully accurate model. Per my information Revell has used the mentioned C-54 placed at the former Tempelhof airport, and they have done extensive measuring on it. As a result, the measurements on the model are correct within a millimeter. The fuselage and wing have delicate grooves and panels, which look very convincing.

The flaps can be installed in up and down positions and look excellent. The rudders have been made moveable, which reminds of the Airfix models from the 1960s but much more delicate. The pins in the rudder are very vulnerable, and a few had already broken off on the test shot. When I build the model, I will glue the rudder in fixed position anyway, so this doesn’t bother me too much.

Unfortunately there is a problem with these rudders. On the C-54 displayed at Tempelhof, the original rudders with fabric stringing have been replaced by metal plated rudders from a DC-6, presumably because these are durable for a plane that is sitting stationary for long periods of time like the Tempelhof plane. Revell has understandably applied the metal rudders on the model. If you want to go all out on this model, you would have to adjust the rudders to suggest the correct fabric stringing. I have informed Revell about this fault but unfortunately, they have not corrected this on the final model. Hopefully at some point there will a third-party manufacturer who will release correct resin rudders.

The Revell model really deserves praise for the level of detail. It has a detailed interior highlighting the troop transportation role, with so called ‘bucket seats’. The walls of the interior have been constructed as separate parts and the windows are placed between this and the exterior fuselage part. The cockpit and the spaces behind it are fully decorated. It is unfortunate that you can see so little of these once the model is closed off. This really begs to open the doors on the model. Included on the decal sheet are decals for the instrument panel.

Some more nice details are the nacelle, wheel bays, landing gear and engines. The propellers are of the paddle-blade type, which is correct for most C-54. Though, if you would want to build an early C-54 or C54A you require needle blade props. You might be able to find those at a place like Aeroclub. The kit has options for a radar nose, a choice of different main gear, with or without an astrodome, or small carburetor inlets or the big fairings as would have been used on later aircraft.
Included are decals for a ‘Rosinenbomber’ C-54D with registration 43-17227 from 1948 as it was used in the Berlin Airlift operation, and the Military Air Transport Service livery which is also a C-54D, registration 43-17218 from 1962. This has large orange areas on the wings and fuselage. The decals are very complete and very delicately printed.

To me, the model is very suitable to apply other liveries, both civilian (KLM, Sabena or even Lufthansa) or military (Belgium Air Force or NGAT, as mentioned). Another idea would be the Blue Angels or Thunderbirds team support-planes. It won’t take long before the third-party decal producers will step up to fill this need.

One more piece of advice: Use a razor saw blade to get most parts out the sprues, especially the delicate engine parts!

In 2016 Revell has released this kit as the civilian DC-4.

The C-54 kit of Revell. A comparision with the test shot.

This section shows photos of the sprues included in the production version along with the authors remarks on any incorrect or imperfect parts. 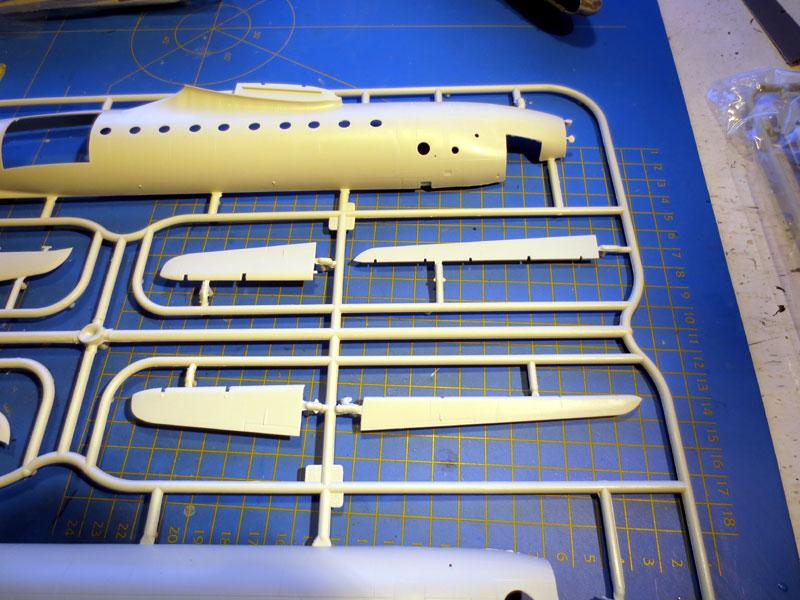 Starting off with the most important area: the control surfaces. As stated in the review they are based on the metal version of the Tempelhof plane this kit was based on, rather than the fabric stringed surfaces that likely all DC-4 were fitted with. As stated I have notified Revell of this mistake when building the test shot, but it perhaps changing the mold was too expensive. Looks like a chance for aftermarket fabricators or scratch builders to create something.

Some dents are visible in the wing fillets. Presumably these are caused by the ‘stitching’ command of the CAD design program. With ‘stitching’, double curved areas are joined through automatic calculation to remove cracks in the design. This can often lead to surface dents.

The fuselage has some minor imperfections. 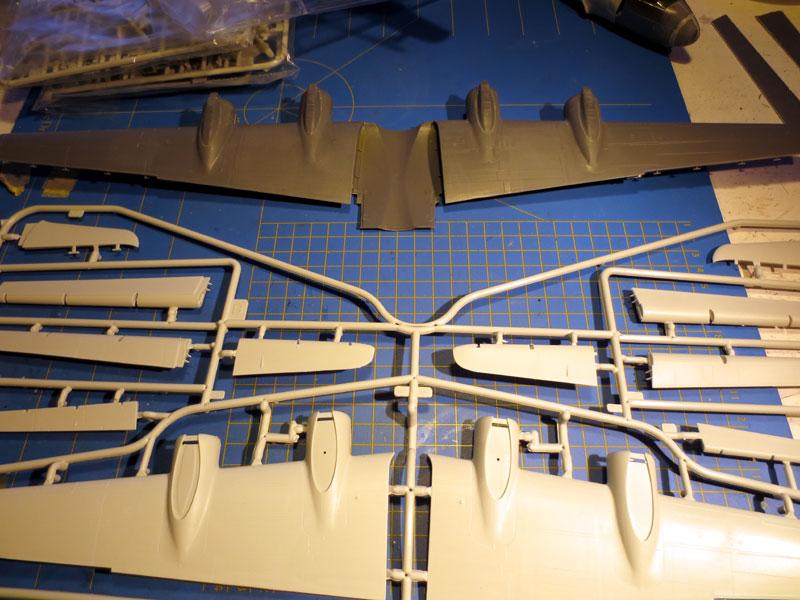 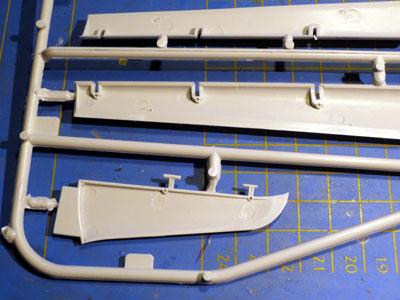 There are minor imperfections on the wing surfaces, just as the fuselage halves described on sprue A.

And just as on sprue a, the control surfaces portray the incorrect metal variant rather than the fabric version. The flaps on the C-54 were made of metal, and these are correct on the model. There is some flash on the pivots of the elevators. 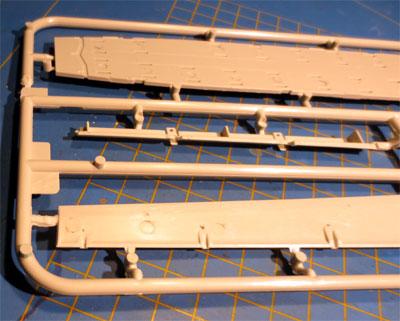 There is no sprue C. These will likely contain parts for the passenger DC-4 version of this kit. 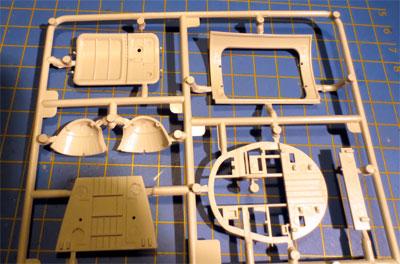 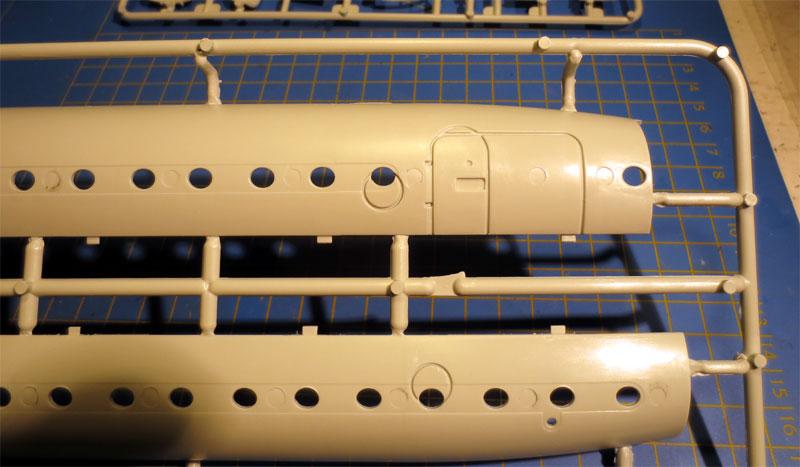 On the left halve the passenger door is now visible which is a change from the test shot. Revell has made the choice to also use these for the passenger version. The interior of the C-54 and DC-4 obviously differed, but Revell has added new cabin sides for the DC-4. 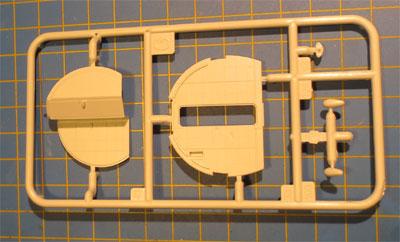 Not included. Presumably these contain parts for the passenger DC-4 version.

The propellers are polished, the engine cowlings are not. 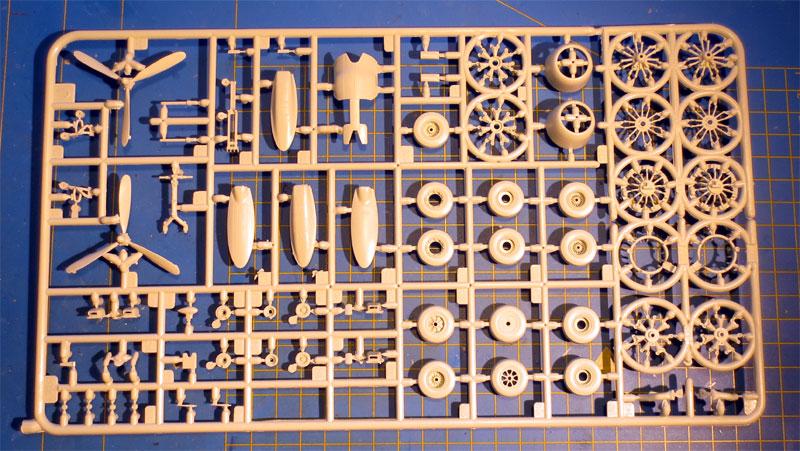 Some flash on the parts. 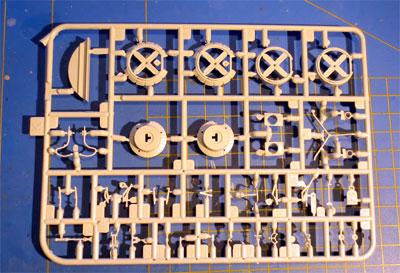 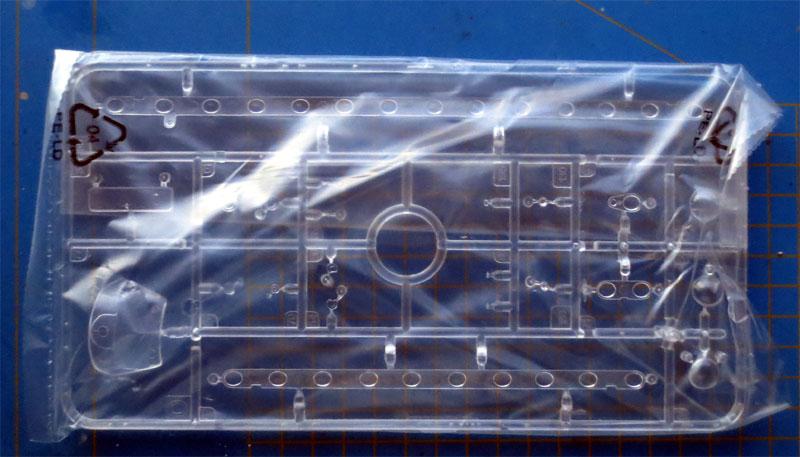 End 2016, this kit was released with some additional parts as civilian DC-4 passenger airliner. 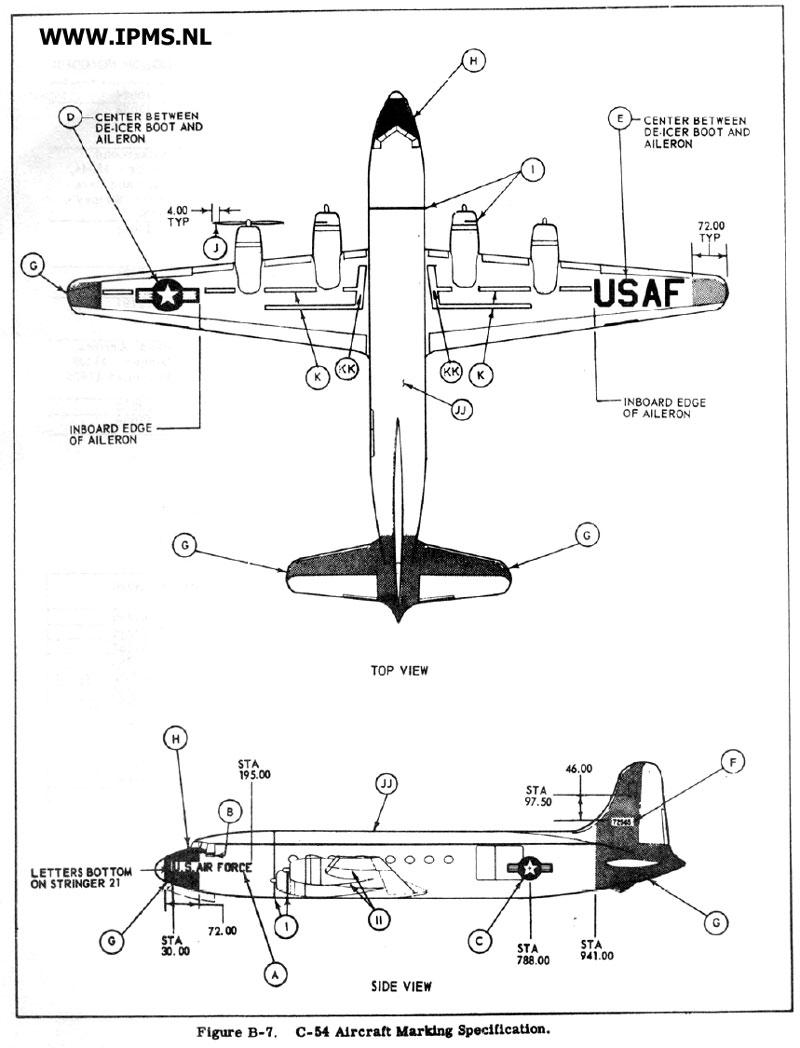 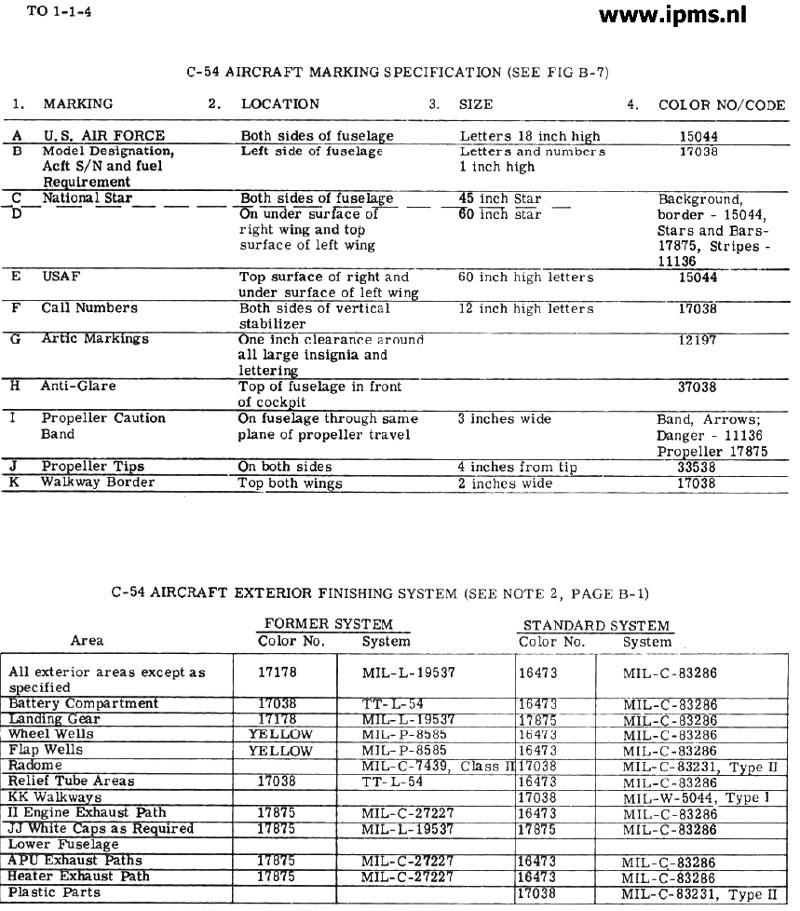