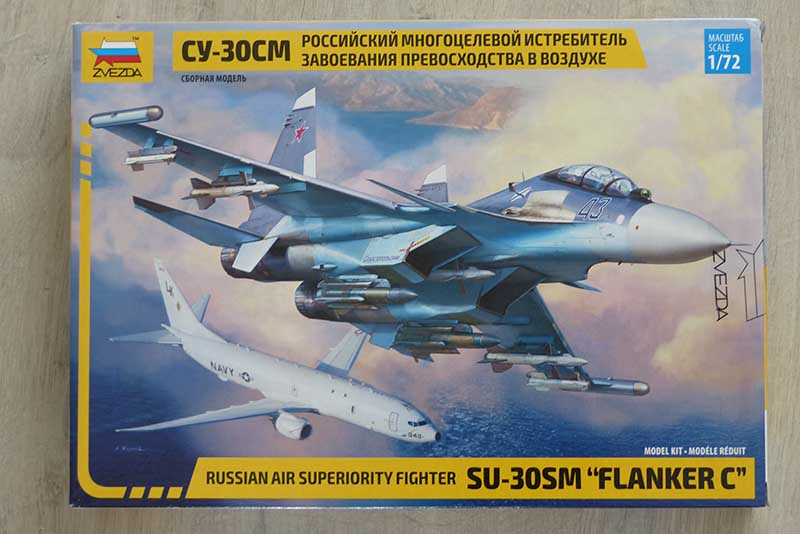 Brief history
On May 20, 1977 the first prototype flew of the Sukhoi Su-27, which was developed as a direct counterpart to the American F-15 Eagle. After some aerodynamic adjustments, this would be the starting point for a large number of versions with different type-designations, with which the Soviet Union started to develop a very advanced and competitive fighter aircraft for over 40 years.

A version of Su-27 later was the Su-33 as a carrier based aircraft. Subsequently the Su-35 and 37 were developed, and the two-seat Su-27UB, which eventually was further developed into the Su-30SM. This Russian version is in the kit and the real aircraft is a very advanced, multi-role aircraft for both air defense as well as fighter bomber. The aircraft has not only a large wing  but also canards and thrust vectoring, where the exhaust position in the vertical plane is adjusted to enable tighter turns. This gives an enormous maneuverability and a great advantage in direct air combat. In addition, the type has an internal fuel capacity similar to that of an F-15 with 3 external fuel tanks. This is to protect the vast northern coast of Russia.

The current Russian air force ordered 88 aircraft with contracts in 2019 and 2020. The aircraft is equipped with a new radar and new weapon systems, making the systems compatible with those of the Su-35.

Model
The box in which the model is packed is slightly larger than A4 size and very strong. The boxart carton shows a Su-30SM intercepting on a US Navy Boeing P-8 (737). Is this fiction? The box also contains a number of photos of a built model and the decals. About 14 sprues are in the box, well packed in 5 plastic bags with some 385 parts in plastic.

The assembly instructions are clear, but require some study. In the left margin indicated are the various subassemblies. It's a good idea in itself, but I don't quite understand why. Maybe because you can build these subassemblies in advance. The subassemblies are shown in grey on the main page. Although the box indicates that there are 385 parts, ‘only’ about 290 are used, of which about 80 parts are used for the weapons. This is because the model shares some parts and sprues with the earlier Su-27 kit. Some parts are thus extra such as the older the engine exhausts and the nose gear.

What immediately stands out is how sharp the parts are moulded. Panel lines are subtle and engraved, and there's no flash. However, on the lower fuselage part some surfaces are a bit rough, seems that the mould was not completely clean when injection moulding of this sprue took place. But nothing that cannot be solved with some polishing. The ejection seat, intakes and wheel bays look good. Everything fits nicely. The intakes consisting of three parts look good as well.

The decals are particularly extensive, sharply printed and in register. You have the option for 3 Russian Air Force schemes and 1 Russian Navy version. The paint and decal instructions are clear.

Conclusion
This looks like a fantastic kit as seen in the box, I can't wait to build it!

this inbox review was published September 5, 2019 on IPMS.NL