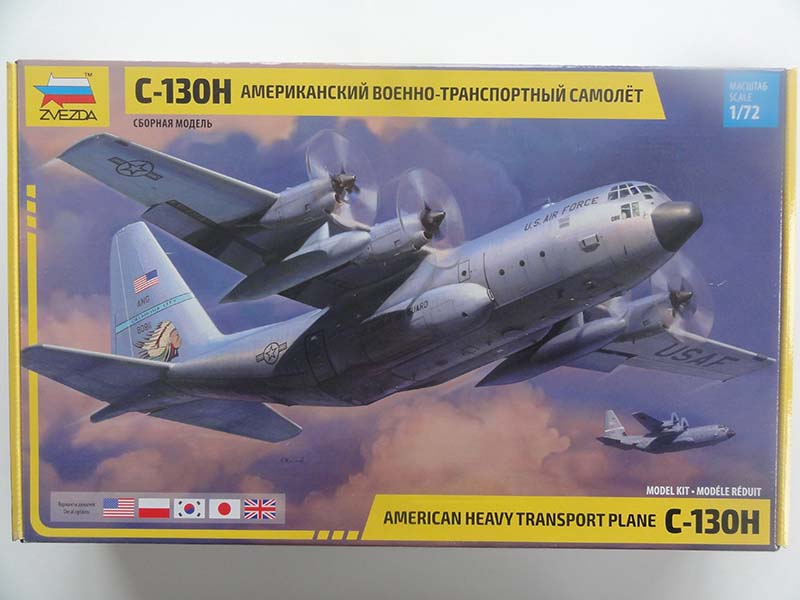 The Lockheed C-130 Hercules actually needs no introduction. This transport aircraft was developed by Lockheed in the early 1950s for the US Air Force as a tactical transport aircraft. It became the workhorse of not only the American but of many air forces around the world. It could fulfill many roles in the various versions. There are some different engine variants used in the C-130 of the Allison T56 type: the T56-A-7 delivers about 4050 shp "horsepower" and is mainly used for the earlier C-130B / E. Then came the more powerful T-56-A-15 with about 4500 shp from 1974 for the C-130H. The latter engine is housed in a somewhat longer nacelle and was also used when an older operational C-130 was modernized/ -updated, such as in the later Royal Air Force C-130K -updated. The Royal Netherlands Air Force (KLu) also put 4  Hercules in service but rather late.

This 1/72 kit from Zvezda # 7321 is for the “standard” C-130H. This is the version with the standard length of fuselage of which the Royal Netherlands Air Force has two aircraft in service: the aircraft coded “G-781” and the “G-988”. These two aircraft are ex-US Navy airplanes and after being modernized, entered KLu service in 2010. (the other two Hercules in service with the KLu are the 4.57 meter longer C-130H-30 that entered service in 1994). The KLu aircraft have been used in many missions and it was recently decided that an aircraft will support the UN mission in Mali. Back to…

The Zvezda (which means star in Russian) model looks very good. The earlier 1/72 models of the C-130 had each their own inaccuracies, this kit looks very good in shape and you get various choices in detailling.

There are more than 300 parts in the Zvezda kit with 10 sprues. The cockpit transparancies are in the usual "soft" Zvezda plastic. The kit is provided in a good cardboard box with lid. The instructions are clear but the color indications are a bit vague with Tamiya paint numbers and the Zvezda paint numbers which are unknown to me.

You can pick from five color schemes with beautiful decals for:

That means a choice for versions E -updated, K -updated and H. For these there are various alternative parts in this kit. Very neat! Make your own choice and study carefully which parts you need which are indicated by Zvezda as: for scheme 1,3,4  for C-130H, 2 for E -updated, 5 for C-130K -updated.

The grey plastic is neat with engraved panel lines, although no rivets are engraved, but you hardly see them at 1/72.

Fortunately, the fuselage has the correct characteristic kink in the cross-section where the floor is situated. The very nice interior as per kit has plenty of details like roof details, loose side panels and details near the large ramp. For this standard C-130 you have to reduce some floor parts in length; this suggests that Zvezda may later release the “long” C-130H-30 (or RAF C3) as a kit. I think they only need to replace the fuselage halves with “longer” ones. (That would be welcomed by Dutch modellers who want to build the first Royal Netherlands Air Force aircraft "G-273" and "G-275").

The cockpit with galley is very neat and has sufficient details. You also get 3 neat figures for the crew with separate positionable arms. Often a C-130 flies with a crew of four so some extra folding seats etc. may be necessary as well as a second sleeping bunk located above the lower one. Set the decals for the circuit breakers vertically in the cockpit! The interior is already very beautiful as per kit, but the superdetailer has plenty of options to do some scratch building like canvas seats folded down and additional cables and structures. The fuselage doors can be set open with a choice of different door and window shapes. The large ramp at the reas can also be set open.

The nacelles are for the stronger T-56-A-15 of the later C-130 versions like the H, E-updated and K-updated. These nacelles are a bit longer and these parts even have deep air intakes. The propeller blades are separate parts and can therefore also be set in a different (vane) position.

For the radar nose cone there is a choice of three types with / without lightning electricity strips. 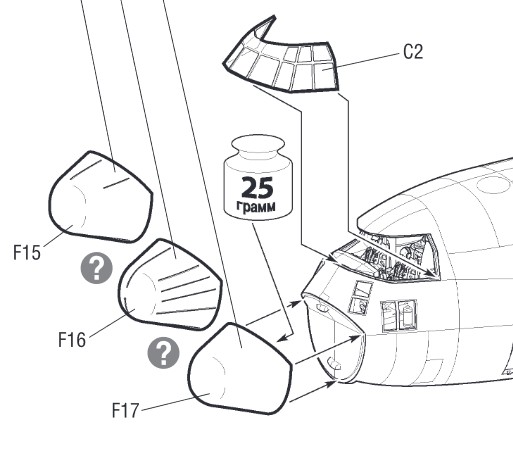 The basic breakdown of the kit is OK. The wing flaps are moulded with the wing. Otherwise, the model would become quite expensive if the kit would provide them all separately. In Hercules models, the wing-fuselage connection is notorious, it often broke open. In this kit there is a central top part of the wing which makes the joints stronger. Still, I think it is a good idea to fit a metal spoke or thick rod within the wing and some extra plastic connecting strips between the larger panels on the inside. The demarcation lines/ gaps of the flaps and ailerons can be engraved deeper with a scriber. Furthermore, at the lower inboard wing the flap panels can be filled and re-inscribed to give the flaps some more chord.

The undercarriage is nicely done with detailing in the gear bays. The wheels are slightly flattened and look good. Furthermore, there is a choice of fairing type for the APU for the right side gear fairing and an optional intake under the cockpit. For the English C-130K you also get a refuelling boom and the correct GTC fairing in the kit.

You will also find two external fuel tanks with the option of chaff dispensers in the box, but unfortunately no pylon with separate ECM pod.

The kit also comes with decals for 5 schemes as listed above, but also a large sheet with the walkways (both yellow and black) and stencilling. 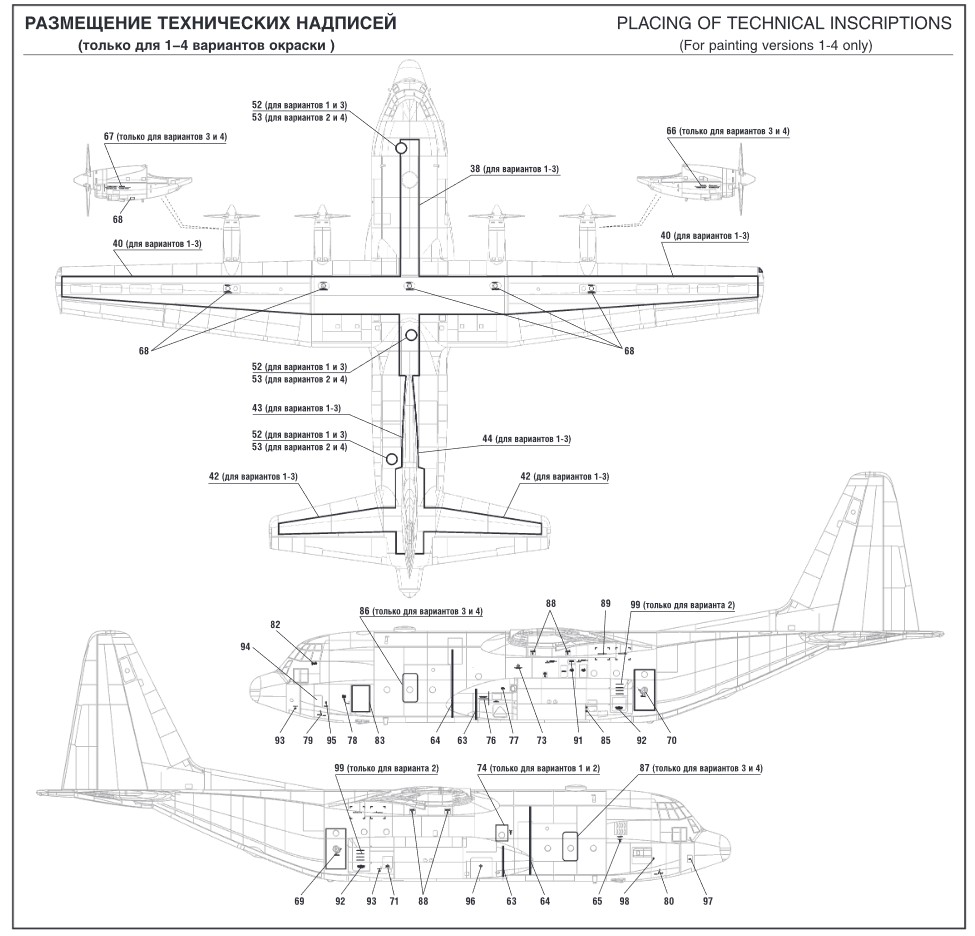 - Look for the version you want to build which antennas and “astro domes” should be set on the upper fuselage.
- The shape of the fairing at the fuselage-wing junction at the flaps can be improved a bit, look at pictures.
- Also check with photos the shape of the tail end in CONSTRUCTION STEP 35, which may differ a bit per particular Hercules. The short RAF type “beavertail” from older Hercules aircraft is also included in the kit.
- For the RAF C-130K Hercules the yellow walkways are not quite correct because the red blocks are missing; the big load floor details are also a bit different for the RAF, but that is not visible at all on this scale.
- Do not forget to set sufficient nose weight and I hope the undercarriage is strong enough!

Unfortunately for Dutch modellers no decals for the Royal Netherlands Air Force (KLu) are provided in this kit, but Dutch Decals and Flevo Decals FD72-008 had several decals sets in the past. Dutch Decals promised that soon set DD72097 also for this Hercules will be released! And no doubt there will be many after market sets and decal sets for other air forces for this model.

Conclusion
Zvezda has met the best expectations with this beautiful kit that immediately superceedes all previous 1/72 C-130 kits. And all that for a very nice price! And maybe Zvezda will also release the longer C-130H-30?