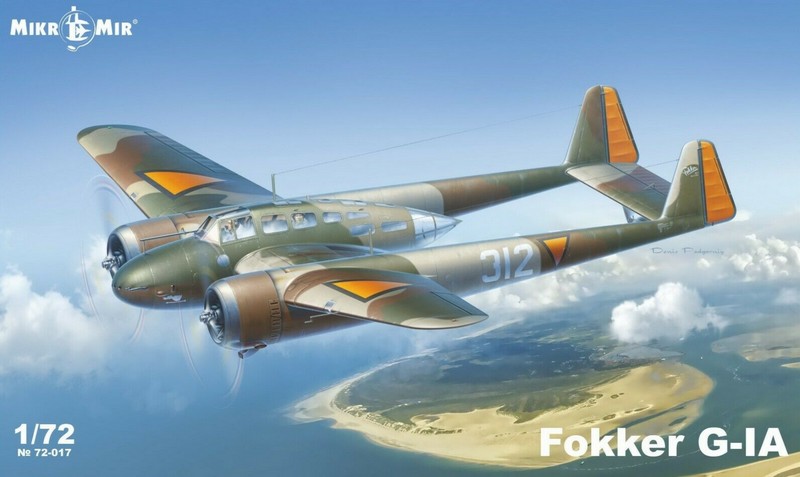 Finally a new injection molded plastic model of the Fokker G-1 in 1/72 scale!

It has been more than twenty years since MPM launched their short-run Fokker G-1   [<review] model was released. And it was sold out quite quickly and was not re-released after 1999. In terms of shape, there were quite some inaccuracies but there were not many alternatives. The older vacuumform and resin G-1 models were no longer available and surely also had their problems. When Mikro-Mir launched a 1/48 short-run Fokker G-1 model [<review] in the fall of 2019 , many hoped that Mikro-Mir would downsize their model to 1/72 scale. Well that has happened and end February 2021 the 1/72 model came on the market.

In the box with a beautiful painting on the lid are in a plastic bag:

In another bag are two clear sprues with the transparent parts, particularly for the fuselage with its many windows.

On our IPMS website you can find a first review of the 1/48 model of Mikro-Mir, so I compared the contents of that kit. Well, I can report that this is indeed a scaled-down version of their 1/48 model. Obviously for the smaller scale, some details are now carried out as one single part, such as the engines, the stabilizer, the oxygen bottles in the cockpit, the transparent tail cone, etc. The side walls of the wheel wells are now provided as etched metal parts. The amount of detail though is not less. However this model, due to its complex interior with many etched detail parts and the complex configuration of the G-1 itself is not a model for the beginner. 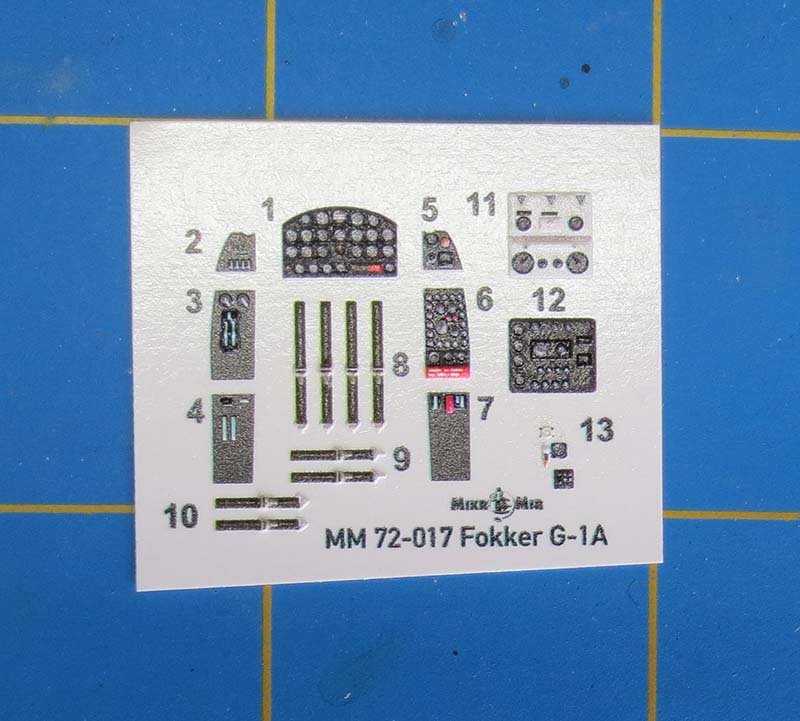 A new kit feature is that the instrument panels for the cockpit are provided with beautiful 3D printed decals! That technique was seen earlier in some aftermarket sets since the summer of 2020 and this is the first plastic kit I see in which they are included as standard. On that 3D sheet there are also seat belts for the pilot and the radio operator in the center. However, these are not indicated in the instructions. Unfortunately nothing has been added for the support of the observer / gunner in the back. On the NEDMIL part of our website you can also find a photo of that area. It can be made from a piece of masking tape.

The parts in the kit look neat, only a little flash here and there. There are neatly engraved panel lines where applicable, such as the tail booms and the stabilizer. The latter does have a few shrinkage dents. Perhaps it would have been better to have had a 2 part solution. The wings and center section of the fuselage were wooden on the real aircraft, so there is almost no panel line on them. All rudders were covered with linen and there is a subtle representation of the underlying ribs and set in the wing and tail surfaces. 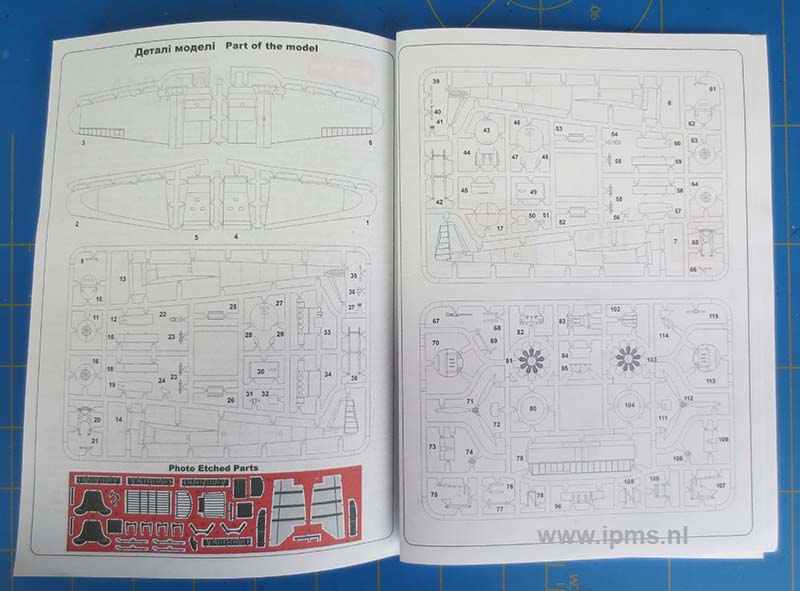 The drawings in recent books about the G-1 are not on a 1/72 scale, but I was able to compare the shape of various parts looking also at photos. It matches up pretty well. Mikro-mir also consulted with the Fokker G-1 Foundation that assisted in the research, they are noted on the first page of the instructions. (A small error is that it is noted that a number of the G-1's were based in Alkmaar. That is not correct, it was the nearby airfield of Bergen).

The construction description starts with an overview of all parts on the sprues and on the metal frets. This is really required as on the sprues themselves no part numbers are indicated.
It will come as no surprise that the built sequence is broadly the same as that of the 1/48 kit. Many of the drawings are therefore the same, although a slightly different order is used in the construction of the interior. It is worth noting that the bulkhead to which the pilot's seat is mounted contains some bits on both sides that protrude through the fuselage, so that the wings can be glued relatively firmly to the fuselage. In the last drawings a few things have been omitted: there is no indication that the part for the bomb doors must be cut in two if they are mounted open. However, there are no racks or bombs available, but usually on most G-1 aircraft these were not fitted. In other words, leaving the doors closed is the best here. In the final drawing also the part numbers are missing, but you will get there.

Unfortunately, there are no detail color indications. I was advised by the late Wilko Jonker that Humbrol 129 light grey is a good color for most of the interior. For the rest it is interpreting the black and white photos in the references. In any case, it seems that the leather upholsteries in the rear part of the fuselage were black. Photos also show that the undercarriage and the inside of gear bays had the same color as the outside, so "Camouflage Brown".

The G-1 Mercury's were first completely painted in "Camouflage Brown", then the camouflage pattern changed to "Camouflage Beige" and "Camouflage Green". The color schemes are printed in color on a separate sheet and are the same as the 1/48 version, right down to the numbers of the decals!  The G-1 aircraft with numbers 307 and 312 have the color scheme of the first series and the other G-1 numbered 319 has a different color scheme where the beige and green swapped. The colors are indicated are suggested matching Fed.Std numbers and Humbrol paint numbers. The correct model colors in enamel are available from "Sovereign Models Colour", formerly White Ensign Models, numbers ACD 01, 02, 03. Anyone who works with acrylic paints can find the appropriate color paint in the Hataka Hobby set no. HTK-AS107. 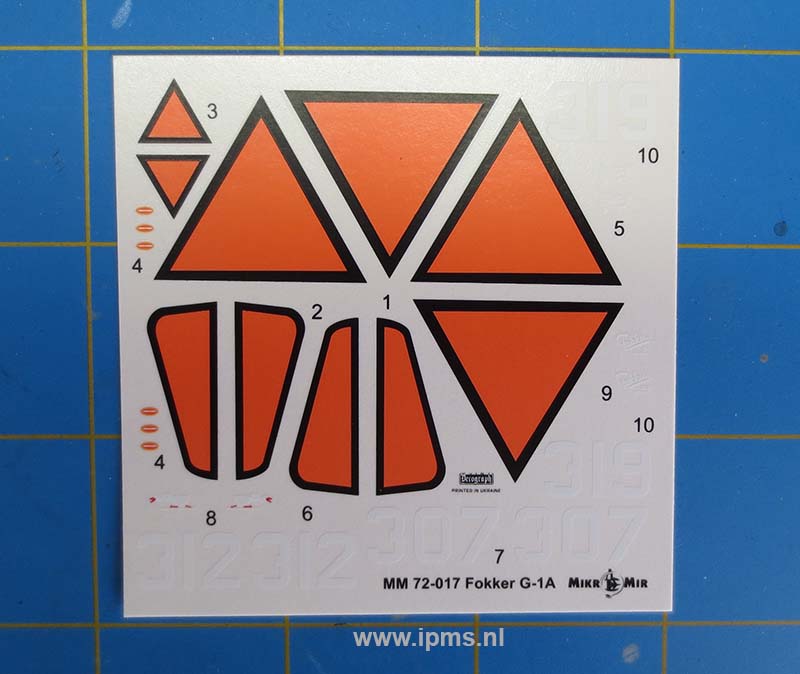 The decals are neat, but unfortunately not entirely correct. In reality, the black border around the Dutch orange triangles and on the rudders always had a constant width of 10 cm, regardless of size. And that is unfortunately not the case with the decals in the kit. The edges of the triangles on the wings are correct to scale (1.4mm wide) but those on the tail booms and rudders are unfortunately far too narrow. That can be solved with some strips of black decal or with a brush and a steady hand. Or use the old decal set from Dutch Decal for the G-1 (nr. 72030). A final note about the "duck with the knot in his neck" marking: it was on a yellow arrow, the one on the decal is unfortunately white but that too can be solved with a fine brush and a steady hand.

In summary: we should be happy with this injection molded model of the Fokker G-1 Mercury (G-1A) available in scale 1/72 and it is very good!

How it all will fit is still to be seen, but Mikro-Mir has made enormous progress in this area in recent years. This model is certainly not for beginners due to its complexity, but why not give it a try!