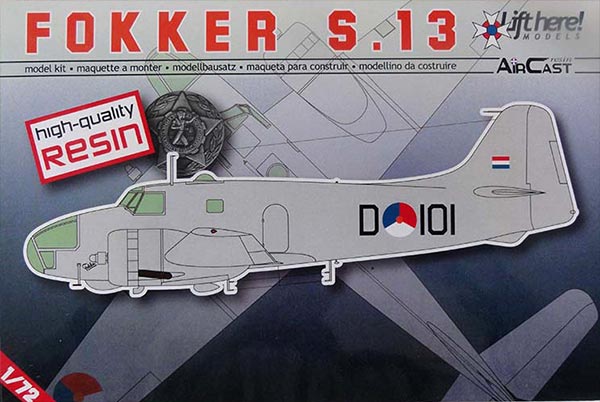 INTRODUCTION
The S-13 “Universal Trainer” was developed as a multi-engine trainer by Fokker after the Second World War. This project was also envisaged to rebuild the Fokker aircraft factory after 1945 and was supported by the Netherlands Institute for Aircraft Development (NIV) of the Dutch Government. The initial Fokker design no.236 was for a training aircraft to replace the Oxford and Anson used with the Royal Netherlands Air Force immediately after the war. Furthermore, Fokker hoped to sell at least 100 aircraft for export. The design was therefore adapted so that it could somewhat meet English requirements, and therefore became now some 1000 kg heavier and needed now not 450 shp but 600 shp engines. Fokker called it the "Universal Trainer" i.e. multi-purpose trainer although that name was rarely used in practice.

The construction was in light metal with 2 detachable outer wing parts. The control surfaces such as ailerons, elevators and rudder were made of light metal covered with linen. In the fuselage there was a front section with transparent nose, the pilot section with bulkhead and door to the cabin, where the training stations for five students would be located. In the back there was a compartment for equipment.

In mid-1948, however, the air force staff was already considerably less interested in this type and in August 1949 it became really clear that they were not going to order any S-13 trainers for the Royal Netherlands Air Force.

The S-13 with registration PH-NDW and property of the NIV made its maiden flight on March 11, 1950. It turned out to be a good plane to fly. This S-13, still owned by the NIV, also flew in a "fake" Royal Netherlands Air Force scheme as D-101 but was never used by the air force. No matter what the Fokker Sales people tried, no order was obtained. The aircraft was then given the new PH-NEI registration and a different attractive color scheme in June, 1951. In 1954, the Dutch aircraft operator Schreiner rented it from the NIV for target towing flights. In 1957, the aircraft was formally given to Fokker transferred but scrapped from the register on June 10, 1960. It went to the college collection of the Delft Technical University Department of Aircraft Engineering. Currently parts of this only S-13 can be found in museums, the cockpit section was on display in the airport museum on Texel (but now is moved to an unknown location).

THE MODEL
The 1/72 model is from Lifthere Models from Serbia and was developed on the initiative of Erwin Stam of the well-known Aviation Megastore.

The parts are in resin and these are really very neatly casted, not a single air bubble can be found. The model consists of two fuselage halves, two wing halves, separate tail surfaces, two engine cowls, two Wasp engines as well as various smaller parts. There is a cockpit with nice seats and controls and also some bulkheads. A cabin floor is provided, but to limit the model costs, no further interior is provided, but you don't see much of it anyway through the small windows. There is no panel line detailing, which is understandable as panellines are often difficult to cast in resin in this scale. If desired, the enthusiast can inscribe these much better. 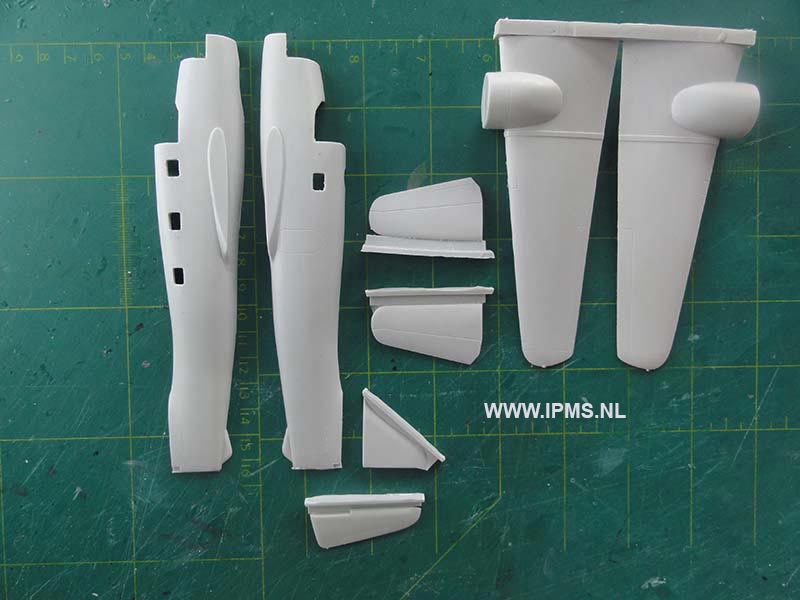 There are two resin Wasp radial engines and two neat propellers in the kit. But it seems that with the real S-13, every engine should have a few small intakes inside the cowl next to the cylinders, which you can make yourself. The engine cowls are neat but differ by about 1 millimeter in diameter. To hide this a bit, it is may be a good idea to saw in the cooling doors and bend these carefully outwards 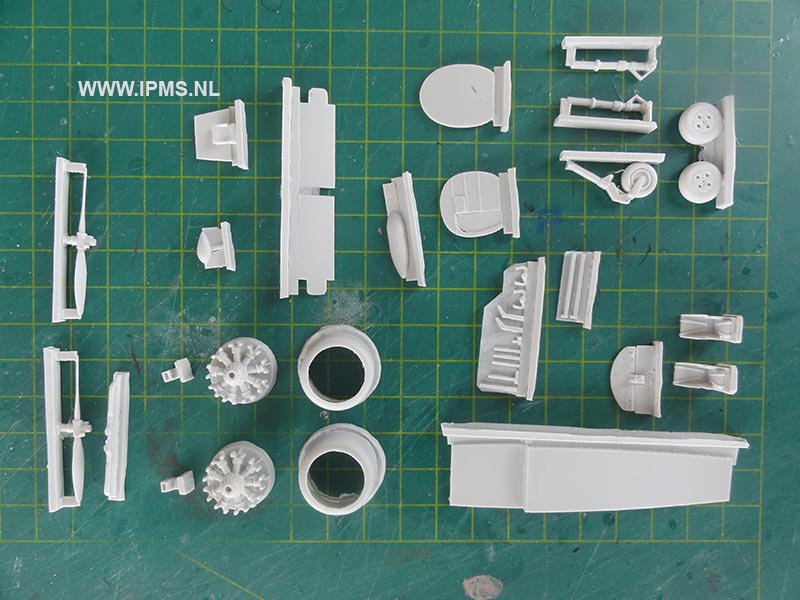 The transparancies are vacuform parts for the nose, cockpit window and astrodome on the fuselage spine. These are clear, neat but thin. In the kit some extra parts are provided in case you mess up these during construction. The cockpit window has the roof molded as well and that helps to integrate it neatly with filler with the fuselage spine. The smaller cabin windows can be suggested with with Microscale Krystal Kleer or made with small pieces of transparent plastic sheet. 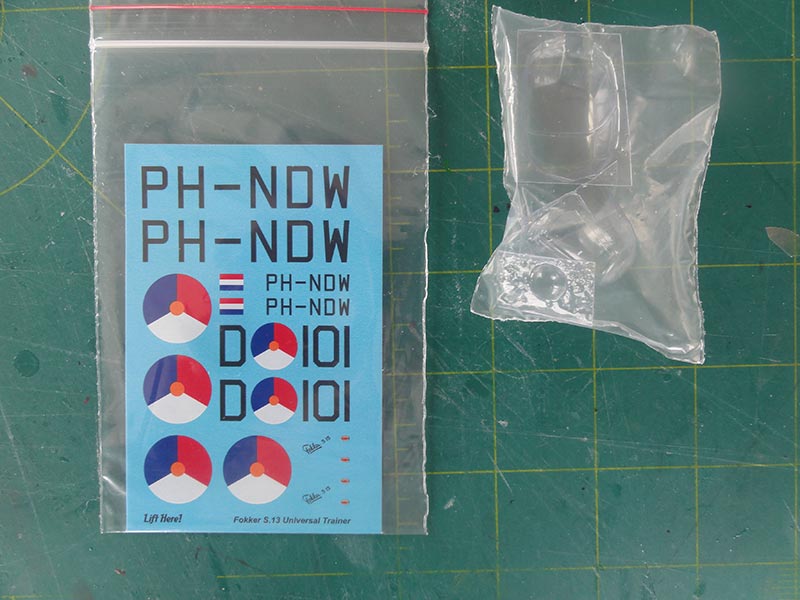 The decals in the kit are for the PH-NDW and for the fake Air Force scheme "D-101". Unfortunately the decal letters/numbers for the registrations and KLu number are a bit too thin, they should be a bit fatter in line width. The color scheme of both schemes is also a challenge, because the real aircraft has differently tinted metal panels and is thus not painted in silverdope. (You can paint the control surfaces silverdope because they are covered with linen). 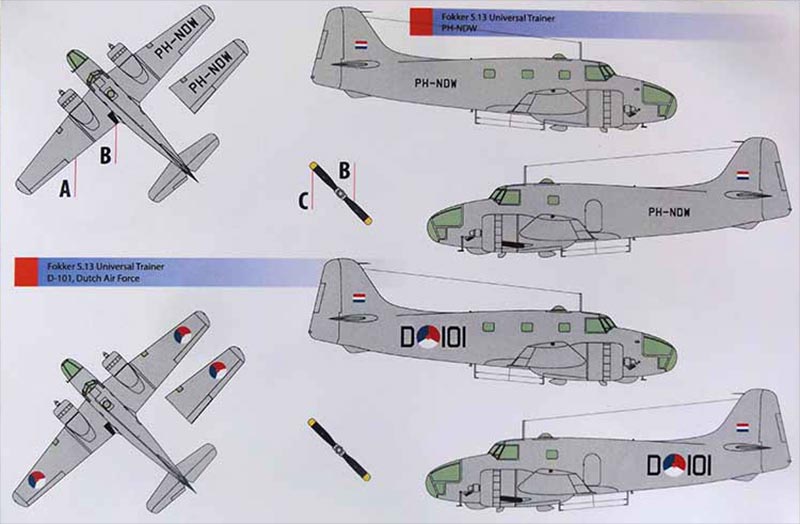 KIT MANUAL
The construction manual is an A4 sheet with a list of parts, a photo of the parts and a number of small S-13 drawings with part numbers. This requires some study by the modeller because the assembly of the model is not immediately clear if you are not an experienced modeller.
For that reason I have enclosed a sketch that shows the main components (see below / photos in this review). The smaller parts such as antennas etc. can be located from the other drawings.

SIMILARITY TO THE ORIGINAL
In several photos of this only S-13 it seems that the transition in the fuselage to the vertical tail should be a bit more hollow. With some sanding using sandpaper folded around a round rod you can improve this a little by hollowing out this area a bit.

The small cabin windows on port and starboard all seem to be located about 2 to 3 millimeters too far forward. You can adjust this by moving them to the back or don’t bother further leaving them in place.

The control surfaces such as ailerons, elevators and rudder of the real S-13 were made of light metal covered with linen. However, a linen pattern is not really visible in photos, so the model looks fine. The left stabilizer is probably the one with the trim tab.

The model also looks better with a pair of landing lights in the wing leading edges. File out their recesses in each wing leading edge, insert clear plastic, sand in shape and polish the lot.

CONSTRUCTION
A quick dry fit suggests that the model fits reasonably well but obviously needs filling and sanding. Removing the casting resin blocks is also not difficult. The question is whether the wing halves are a bit too heavy to be carried by only the fuselage mating surfaces, the fuselage spine itself could split open. It seems a good idea to glue reinforcing strips with card inside the spine and to use 2-part glue here. I will probably use a metal spoke that continues through the fuselage from one wing to the other. The fuselage then remains unloaded.

Glueing the thin vacuform parts is also a careful job. It is best to add some plastic strips at the edges/ ridges to get better joints. And you get a number of extra transparancies in the kit to be on the safe side.

A lot of weight in the nose and under the cockpit floor is needed to avoid a tail sitter.
However, a piece of metal wire is cast into each resin undercarriage strut to bear the weight. Very nicely done by Lifthere! You have to make the nose gear box yourself with some plastic card and drape that ballast around it.

The enthusiast can further add the interior with 5 stations for the students. (but probably the only S-13 hasn't had this interior yet). It seems that between pilots and cabin there is bulkhead with openings and door but this is not in the kit and can be made from card. You can also add a little more detail in the nose section, because you can see it through the transparent nose.

CONCLUSION
A very nice and unique model of the Fokker S-13 and a "must have" for the Fokker enthusiast and every Royal Netherlands Air Force enthusiast, although this aircraft has never been in Air Force service. It is not suitable for the beginner due to the somewhat complex construction and the glueing of resin parts. And whichever color scheme you choose, the various metal panels are a challenge to get neat. But as far as the quality of the resin parts and the dimensions are concerned, everything is fine, it is a pity that the decal letters/numbers are just a bit too "thin" but only the expert can tell.

The model is a limited edition release so be quick if you want to have this unique model.

Thanks to Erwin Stam of the AviationMegaStore for the review copy! 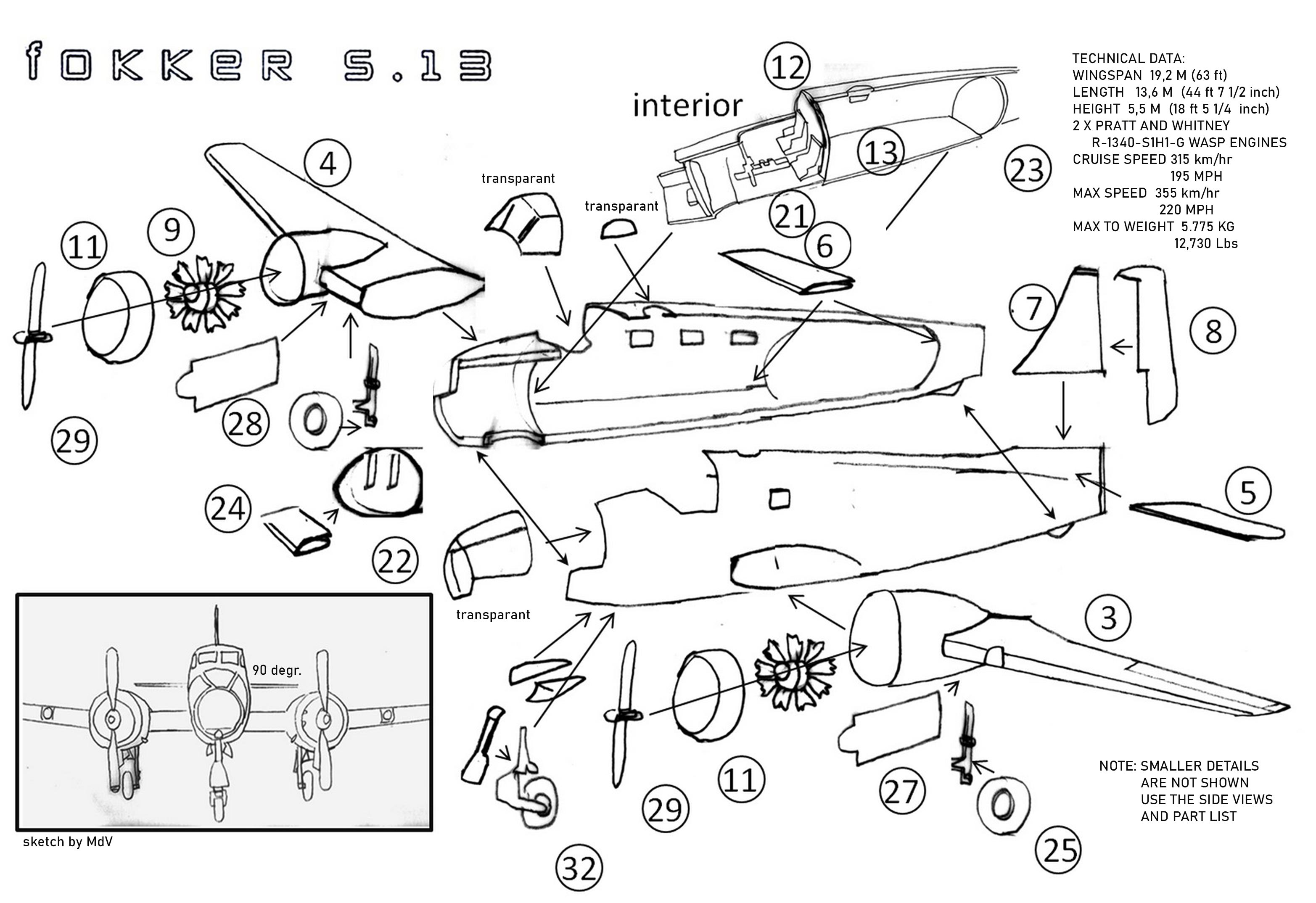 A modelling article is in English is published on my website here....

Also look at my info about the Fokker S-13 here on our IPMS Nedmil pages….

this article was published May 9, 2021 by M. de Vreeze. (c) Copyright IPMS Nederland