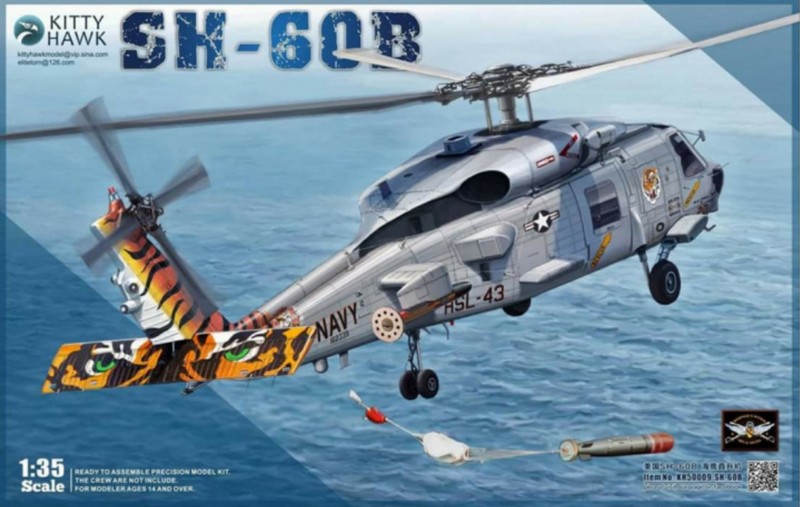 The Sikorsky UH/SH-60 helicopter family has been in service for many years. It all started in 1972 with the United States Army's Utility Tactical Transport Aircraft System (UTTAS) competition to replace the UH-1 Huey. Sikorsky won the competition in 1976 with the YUH-60A. The first production aircraft of the UH-60A BlackHawk entered service in 1979. The US Navy was looking for a helicopter to replace the Kaman Sea Sprite and in 1978 selected a naval version of the BlackHawk, the SH-60B SeaHawk. The tasks were anti-submarine warfare and surface ship control. The SH-60B is now in the museum, but the Blackhawk / SeaHawk family has been continuously developed and is therefore still in service.

In 2019 Kitty Hawk released the MH-60L BlackHawk at 1/35 and just like the original this will be a whole family of BlackHawks and SeaHawks. This SH-60B version was released at the end of 2020.

The box is really fully packed with light gray and transparent parts and contains:

It is clear: this model really beautiful and extensively detailed. The surface details are also raised with rivets and partly very finely engraved, including the rivets. All that is really neatly done, but not everyone will be happy with as the SeaHawk has predominantly raised rivets and hardly any recessed ones. So be it.
According to the instructions, the interior is built first. That is very complete with both the cockpit and the rear cabin. There you will find, among other things, a nice instrument console for the sensor operator and the release installation for the sonobuoys. The entire cabin is placed as a complete module between the fuselage halves. In on-line build reports of other models of the BlackHawk/ SeaHawk family you can read that the tolerances can be quite tight and that dry fitting and sometimes some adjustment is necessary before reaching for the glue.

The cockpit is equipped with the correct instrument panel. It has beautiful raised details with a few large buttons. A decal will be placed over it. That is not entirely correct, because it shows two screens one above the other on the two exteriors. And that's not right, because those are really classical instruments. With big buttons. It is recommended to cut the decal and replace those screens with something else. Do not try to drape the entire decal over those buttons with decal fluid, it won't work.

The color indications in the description are unfortunately rather minimal. Predominantly black is indicated. That's true for the cockpit, but certainly not for the cabin. It contains at least "50 shades of gray". Fortunately, Walk Arounds of the H-60 (like on our IPMS NL site here) can be found on the internet, after all, the real helicopter is already seen in museums.

Before the interior is placed between the two fuselage halves, attention is shifted to the rotor module. The entire module must then be built and then placed on the fuselage. I think that is asking for trouble and it is better to build up the entire upper part on the fuselage in stages. In other words, study the building description carefully and determine your own sequence!

In any case, according to the building description, two engines are first built. These can be displayed later as desired or covered with separate panels. Next up is the very detailed rotor head. This may then be set aside so that the drive shafts of the engines can be connected to the main rotor transmission. The number of that transmission box is not indicated, but it is part C11 on casting frame C. The rest of the plating, inlets, etc. can then be placed.

Then the rotor blades may be glued to the rotor head according to the build description. Those blades look great and very nicely curved. After that, the whole can be secured to the transmission box. The latter is never a good idea with a helicopter under construction. And certainly not with this model, because... somewhere at the end of the building description it appears that there is also the possibility to build the model with folded rotor blades! All support rods that support the folded rotor blades are present. But how should the blades be secured to the rotor head? Unfortunately, this is unclear, so study walkaround photos on the internet.

One of the final assemblies is the folding tail with tail rotor. It is casually indicated that the tail can also be folded, but you are not told how. Well, both stabilizer halves are first folded upwards against the vertical stabilizer and secured. Check again with walkaround photos from the internet. Two fuel tanks and two torpedoes are also included. How should they be attached to the model? Guess twice where to find that.

The decals are fantastic and are said to have been designed with the help of the people who also painted the real helicopters. There are six options:

It is very difficult to pick one with the very nice colorful options. The color codes in the color schemes are those of Gunze Mr. Color, although that is not stated anywhere. Fortunately, the FS numbers are also included.

Conclusion:
This SH-60B model in 1/35 scale is a very well detailed model. With very nice color scheme options. As far as I have been able to verify as helicopter specialist, the shapes are OK. The building description is unfortunately a bit inadequate for such a complex model and a lot will have to be sorted out with photos on the internet or books. So the model is only buildable for experienced modellers. That builder will surely enjoy all the details and the model is highly recommended. A modelling report will be published in a future IPMS Nederland MIP magazine.

Thanks to Glow2B in Germany for providing IPMS Nederland with the review model,

Also check out the walk arounds on our IPMS NL site here....

this article was published on the IPMS.NL website June 4, 2021