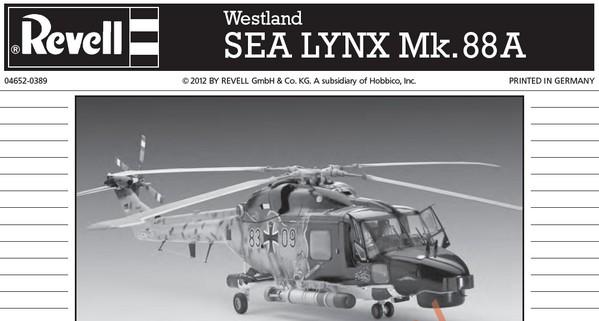 IPMS The Netherlands has received from Revell Germany a pre-run plastic kit of their new Westland Lynx helicopter kit in 1/32 scale. We had no assembly instructions yet nor any decals. So this pre-view is subject to some interpretation. So how is the kit?

A little bit of background. The Lynx helicopter was developed in a joint effort by Westland (UK) and French Aerospatiale as a multi-role helicopter for army and naval use. The naval versions got a wheel undercarriage and the army versions a skid. The first prototype flew in 1971 and many versions were developed. The type was used by the British armed forces, France, Germany, The Netherlands, Danmark and many other nations.
The Dutch naval service (MLD) ordered the Lynx for anti-submarine role, transport, and Search and Rescue (SAR). The MLD helicopters operated from Dutch naval ships and were fully involved in their operations. Their designations were UH-14A for the "utility" transport helicopter and SH-14 for the anti-submarine role. The Dutch Lynx was derived from the British HAS 2/3 type. It could be fitted with a hoist and it was famous for its rescue missions in terrible weather. For the anti-submarine SH-14C version even a MAD system was develop but proved to be in fact unusable. At the end of 1993, the remaining Dutch Lynx helicopters were standardized to the SH-14D. A new GEM-42 engine and several new systems were installed such as a removable dipping sonar installation. New BERP main rotor blades were installed as well with their typical curved tips. The stabilizer was renewed with reduced span and "gurney trailing edge", but the tailrotor remained unchanged however. When the sonar is installed inside the cabin of the Dutch SH-14D, the hoist is never fitted. When the sonar is not installed, the fuselage bottom hole is closed with a plate and often the external hoist fitted. The type was an excellent helicopter for the Dutch navy and was liked by its pilots and crews. It was put out of Dutch service September 2012 to be replaced by the NHI NH-90.

The Revell kit is the first Lynx in 1/32 scale. It has parts for a Mk.88A as used by the German Navy. The Lynx Mk88A has a nose with a lower search radar fairing and the FLIR. ECM pods are seen on the undercarriage stubwings. This version is different from the Dutch Lynxes, more on that later on.

The shapes and proportions of the model look OK for a naval Lynx. Obviously, Revell measured the real German Mk.88A at a local airbase and included many of details into the model. The kit looks impressive with about 270 individual parts and very good transparancies. The pilots' sidedoors with their clear windows also look great. The fuselage bottom is a separate part so moulding enabled many details as well.
Model interior has lots of detail. The cockpit is well detailed and even the back of the seats are nicely done. The seat straps are moulded with the seat cushions, some sanding can be done replacing the straps with self made ones. The sliding doors are separate and when set open, a lot of the interior can be seen. (the door windows are slightly too big and one flat and one bulged door window are in the kit). The floor is well detailed and comes with nice seats and webbing on the walls. Obviously a cabin roof is also present. The sonar installation and the operator console are also included and look great. Note that these systems may differ depending on the naval operator, for example on a Dutch SH-14D the sonar is slightly different. An external hoist is not in the kit, but is not always fitted to a Lynx.

The outher surfaces on the model are well represented with various re-inforcement plates. However, we greatly miss the raised rivet detail on this pre-run model in 1/32. Probably these are also missing on the to be released Revell production kit. On a real Lynx numerous rivets are well visible and for a modeller very difficult to put on the model itself. (Aftermarket rivet-decalsets from Archer or HGW may come in handy here). Another detail missing are the various grills, these could be opened up by the modeller and made from etched metal mesh.

The later Lynx versions have the BERP rotorblades and some have non-foldable tail ends. This Revell model of the MK88A has also these. Of each BERP blade, the subtle kink at about three-quarter span in the trailing edge it nicely included as well.

The kit has the later style tailrotor. This tailrotor has a greater diameter (2,36 m) and rotates the other direction than the initial tailrotor. The rotorblade cut-out shape is also slightly different. For an old style rotor, the kit parts are usable; see note below.

The kit stabilizer is of the newer type with "gurney" trailing edge but has a too large span. It should be reduced 14 mm in span, see note below. The advantage is here that an old style stabilizer can be made from this part when desired. May be this is the intention of Revell when they plan other versions in later kit releases.....

The undercarriage looks great, but normally on a parked naval Lynx the main wheels are seen at 45 degree angle. The kit sets them fixed in straight forward position only. The undercarriage stubwings have the German MK88A ECM fairings. Also, the various smaller intakes and scoops typical for a MK88A are nicely done. The separate kit parts suggest that Revell will for other Lynx kit releases have different parts here.

Armament in the kit consists of a 12.7 mm machinegun at the left door, 2 Sea Skua missiles and 2 mk.46 torpedo's.

A quick assembly with tape showed a good fit for the main kit parts, although the cabin roof and engine fairings need some care to align.

The Revell kit will come with 3 decal options for a German Navy Lynxes including a special yellow scheme Lynx seen when the type was 25 years in German Navy service:  the yellow should be painted, the Lynx head and claws are decals.

Extra sprues are in the kit, like transparant sprue H and extra parts for a HMA8 with extra parts including the folding tail-end/fin. Strangely enough, NOT indicated in the instructions!

For Dutch modellers the question arises... can we make a Dutch MLD naval Lynx? For example a SH-14D which by the way has a lot in common with the British HAS 2/3. What needed changes do we see?

-1- the nose of the Dutch Lynx (like the HAS 2/3) is completely different as in the kit. It has a simple bold shape with no lower searchradar fairing and no FLIR. Probably an aftermarket set will come quickly. And may be Revell will also issue different versions of the kit in the future....

-2- the Dutch Lynx has always kept the initial older style tailrotor, also on the upgraded SH-14D. The initial tailrotor rotates the other direction and has a smaller diameter of 2,21 m. The kit part could be converted. Mirror the rotor and mount the aisle at the other side, reduce its blade span and sand the inner rotorblade cut-out shape. Also remove the large fairing at the tailrotor fin top near the stabilizer root.

-4- the Dutch Lynx tailboom end is foldable. NOTE: the rear tailfin/end is INCLUDED with parts, although NOT indicated in the instructions. The foldable tail-end is in the kit with extra parts:  parts # 266 + 267.
Than, remove the rear end / tail fin. Also very prominent is the linking hinge at the outside and the details both at left and right sides. Make from card, rod and putty. Sand and adapt with some card and add the typical fasteners, add the grills at the driving shaft kink. Add the outside swivelling mechanism.

-5- the later SH-14D has indeed the new BERP main rotorblades. For an early version Lynx, we will need to get or make new blades. (Older Lynx versions had metal blades). Maybe something for the aftermarket?

-6- the ECM fairings at the undercarriage stubwings are different on a Dutch MLD Lynx. Several variations are seen, like fitted Radar Warning Receivers. Check photo's and adapt accordingly.

-7- the enclosing fairing at the nose wheel undercarriage is flat for a Dutch Lynx. Also the fairings and "boxes" at the fuselage bottom nearby are a bit different. Check with photo's.

-8- it is recommended to set the main wheels at 45 dregees angle for a parked navy Lynx. Revell indicates this in their instructions.

-9- the main instrumentpanel is different for a SH-14D. But is INCLUDED in the kit as part #266A , although NOT indicated in the instructions.

-10- the Dutch SH-14D sonar operator console is a bit different in details. With some strip, rod and card adapt. Check with photo's on the Dutch IPMS Walkaround.

-11- the main engine cover intake scoops and fairings show a lot of variations, also on a Dutch Lynx. Check and adapt, nothing difficult here.

-12- the cabin sliding doors should each have a flat window on a Dutch Lynx. But an extra window is fortunately included in extr sprue H. Also, glass panels for the intake grills are included, presumably to be painted with some sort of grill pattern.

-13- depending on the particular period of the desired (Dutch) Lynx model, add various fairings, knobs and proturberances on the airframe. Also, check the various antennas and add as required.

Great that Revell has come with a 1/32 scale Lynx. We greatly miss the raised rivets, but otherwise this kit can be made into a fine model. Let's hope that Revell will issue other versions in the future, but surely the aftermarket suppliers will not wait and come with many many sets and decals.

Thanks to Revell Germany for providing IPMS The Netherlands a pre-run kit for our pre-view.

Check out the Revell building instructions on their site: http://www.revell.de/manual/04652.PDF Update February 2013: Revell has also issued a 1/32 Lynx HAS 3 kit that is a better start for making a MLD Lynx. Look for a comparison of kits and a modelling report on the website of our IPMS Member Meindert de Vreeze here....

Look for photo's at our IPMS Lynx walkaround: