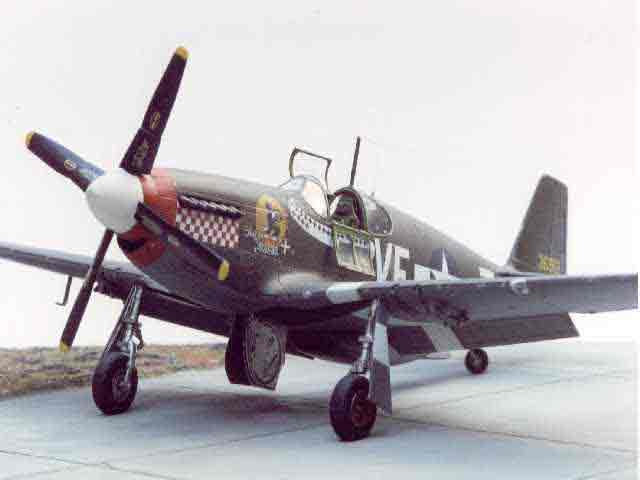 From the files of the SIG RAF/AAF

The kit used to build this model was the Tamiya 1/48th scale P-51B. I finished it in November 1996 and the kit was built almost straight from the box. The references I used were the "Walk-Around" of the P-51D together with the "P-51 in Action". My reasoning at the time was that because of the same engine and such, the difference between the –B and the –D were almost non-existent aside from the canopy, fuselage spine and the armament. Oh, well...

The Tamiya kit falls together like a dream. There are no difficulties in the assembling process that I encountered. I just added some finer details and refined some oversimplified parts.

At the moment of building this kit, I didn't realize that the cockpit as depicted by Tamiya was not correct for this sub-type so I used it unaltered. To be honest, the curved cockpit floor isn't really visible when you look in the 'pit of the finished model but the configuration of the control stick and it's linkage is. The best option is to use the True Details resin set which addresses the problems of the curved instead of wooden floor and it also has the right setup for the control stick.

In the cockpit I added a trimwheel, a yellow arm (emergency landing gear control? Still don't know...), the detail for the flare pistol port, map case, wire from the antenna lead-in to the radio, and an oxygen hose; this last part I made by winding thin copper wire around a thicker wire. The cockpitseat was completed by using Eduard seat belts. Looking back, I should have added some additional details to the hinged part of the canopy too! But that's the learning curve in modelling, isn't it?

What I found was one annoying feature in this kit was that when built up, a seam line was visible inside of the radiator outlet walls. These sides were covered with very thin plasticard. The radiator outlet flap received an actuator arm. Also, the exhausts need drilling out, as do the towing eyes inboard of the main gear struts. I replaced the "blobs" at the front of the main gear by two plates per gear leg with a hole drilled in. Of course, the compulsory brake lines were added too. To make the model less static I cut off the tail wheel and glued it back off-center. For the antenna wire I used the thinnest (dark) fishing line I could obtain.

Paints used were Tamiya's. I airbrushed the white ETO-stripes on because that gives a much more convincing result than decals. I believe that to be correct with these markings, the spinner should be all-red. In any case, the dividing line between the red and white of the spinner was very sloppy during the short time this aircraft had this feature. Weathering was done with pastels for the exhaust staining and the guns, while a very light wash with Raw Umber took care of the panellines. The inner gear doors received a light coat of Tamiya Smoke which gives a wash-like effect. The decals used are Tamiya's kit decals.

On photograph left you can see that the antenna wire is a bit slack; this is because at the last local IPMS-meet the antenna strut broke off. I reattached it with CA, but couldn't get the tension back in the wire at that time. Next I tried applying heat, but PINNNNNNGG! And then I had two wires..... Finally I cut off the remains, drilled back a hole in the vertical tail and spine and rigged a new wire.

The completed P-51 model now sits in the display case in all it's splendor...

I hope you enjoyed this article and will start building a Mustang your self...