The Kaman SH-2 Seasprite was designed by the American company Kaman in the late 1960s, primarily as a utility helicopter for the United States Navy. The first versions had a single engine and it could be operated from aft ship decks. Later, it was upgraded and new helicopters were manufactured as SH-2F and used for anti-submarine and anti-surface ship tasks and fitted with two engines, improving reliability and safety. The US NAVY used the type until 2001. 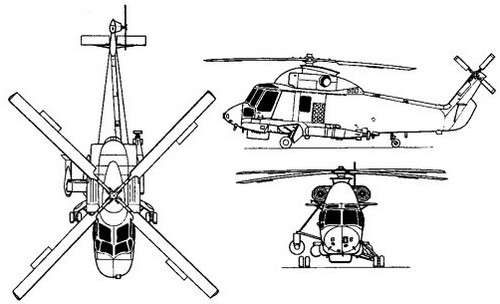 This helicopter SH-2G is a Super Seaprite of the Polish Navy. It is refurbished USN aircraft and was seen during the Texel air show (NL).

This helicopter is at the Pima Air Museum, Tucson AZ with serial 150155.

This Seasprite is at the USS Midway carrier museum, San Diego California with serial 150157 and scheme of  HSL-33 US NAVY. Also a series of photos is seen taken later with engine hatches open.

This Seasprite BuNo 149021 was put into US Navy service September 1961 as HU2K-1 that later became designated UH-2A. In 1971 conversion was done to UH-2D for a Search and Rescue role. In 1974 conversion was done to SH-3F and it was put out of service 1991. Seen at the USS Hornet museum at Alameda, San Francisco bay area, Ca.

Various plastic scale models are available for the Seasprite. In 1/72, the old Fujimi kit was there but it was inaccurate. Later, Airfix came with a much better kit. In 1/48 scale, Matchbox had a good old model, although it will benefit from adding details. Kitty Hawk released an excellent 1/48 kit in 2013.

This walk around page was first created August 2013 by M. de Vreeze