The MQ-1 Predator is an unmanned aerial vehicle (UAV) built by General Atomics and used primarily by the United States Air Force (USAF) and Central Intelligence Agency (CIA). Initially conceived in the early 1990s for reconnaissance and forward observation roles, the Predator carries cameras and other sensors. The aircraft, in use since 1995, has seen combat over Afghanistan, Pakistan, Bosnia, Serbia, Iraq, Yemen, Libya, and Somalia. Several updates and versions were developed, including one capable to fire two AGM-114 Hellfire missiles or other munitions. Versions are RQ-1A, RQ-1B and others. (Note: not to be confused with the RQ-1 Predator B, which became the MQ-9 Reaper). Probably over 100 aircraft are operated by the USAF. 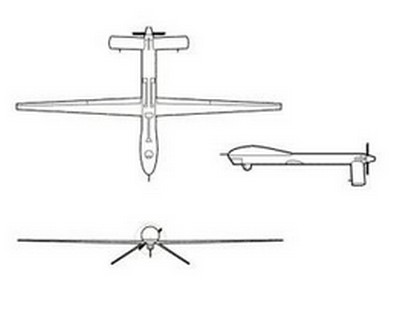 This USAF predator was on display during an Open Day at Volkel AFB, The Netherlands.

For plastic scale modellers, in 1/72 Platz/ Italeri / Accurate Miniatures have issued the same kit. In 1/48 Bronco has a kit. In 1/144 Matuo Kasten had a kit.

This walk around page was first created November 2013 by M. de Vreeze