The Bell company developed the V-22 Osprey as a multi-mission, military, tiltrotor aircraft capable with both a vertical takeoff and landing (VTOL), and short takeoff and landing (STOL) capability. This technology was already explored in the nineteen fifties, but is very complex and very risky. Not earlier than in the nineteen eighties is was again considered, as the US Armed forces had such requirements. The design had a large cabin, a wing with  two engines mounted in swivelling pods with large rotors or in fact propellers.The first V-22 first flew in 1989 (in the meantime Boeing and Bell worked together). Due to its complexity, there were many development problems, plane crashes with large budget overruns. Further flight testing lasted until 1997. First production V-22, now named the Osprey, was completed beginning 2002 with full production starting in end 2005.

Several versions were developed, also for Special Forces. The MV-22s can be aerial refuelled. The type was also used in Iraq and Afghanistan in 2009 and more are on order for the USMC and USAF. 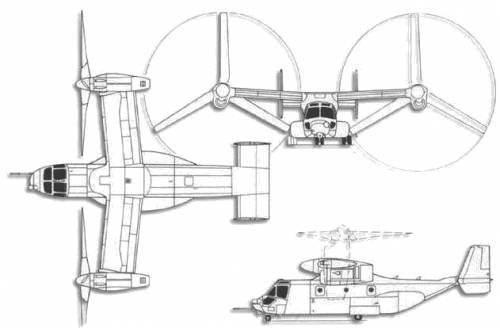