The Sikorsky S-55 helicopter was a utility helicopter developed with company funds and without government sponsorship. Sikorsky designed and fabricated a mockup of an entirely new model with many novel features in less than one year.  Its most significant novel features included unique placement of its piston engine and the incorporation of offset hinges in its main rotor head. Engine placement below and forward of the cockpit resulted in a large cabin directly below the main rotor and the rotor’s offset hinges provided large control moments to enable a wide center-of-gravity range. The S-55 helicopter had a 10 passenger capacity and the 2,000 pound external lift capacity.

The USAF started with an order for five YH-19 helicopters for service evaluation.  First flight was on November 10, 1949.  The Air Force bought many of the type and used them also in the Korean War. The type was used by the US Navy as HO4S and the Army as H-19. It was also widely exported, such for use by the Royal Dutch Naval Flying Service (MLD). 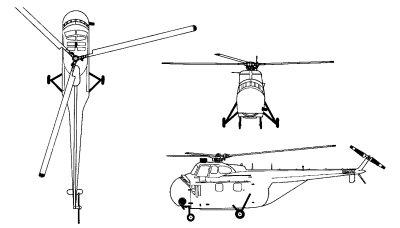 This helicopter painted in an olive US ARMY scheme iwas photographed at the Pima museum, AZ.  Probably it is now at the Commemorative Air Force Aviation Museum, Mesa, AZ.

Three of  these helicopters were used by the Royal Netherlands Navy flying service (MLD). This one "076" with c/n 55471 was supplied under the MDAP in 1953. It later got the Extra Dark Sea Grey and Sky colour scheme and named Salome.

It is kept in good museum condition at the Aviodrome museum at Lelystad airport, The Netherlands.

Enthusiasts and historians find more info on our NedMil pages

This walk around page was first published January 2012 by M. de Vreeze