The Boeing Vertol company designed the CH-46 in the nineteen fifties as a medium-lift tandem rotor transport helicopter for use by Marines. It was powered by twin turbine engines and to have an  all-weather capability. It got a ramp and a troop transport cabin. The type was used by the US Navy and USMC and a few are still in use in 2014. The KV-107 type was used by the Japanese armed forces and a few were exported (e.g. Sweden, Thailand,  and Saudi Arabia). Canada had the CH-113 Labrador. 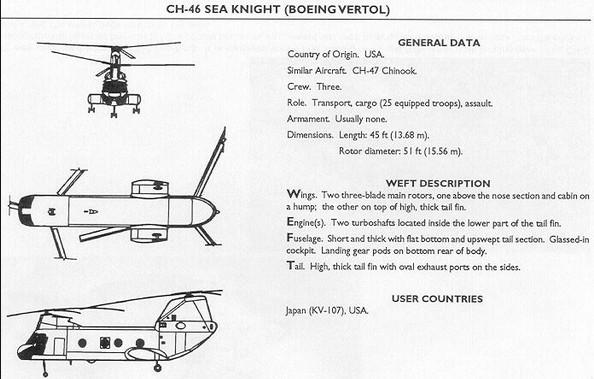 This CH-46A with registration no 150954 is at the USS Midway carrier museum in San Diego, Ca., USA.  It has unit markings-HC-3, for Helicopter Combat Support Squadron 3.

The Columbia company home base is at Aurora, Oregon, USA but is was photographed during passage at Camarillo.

Several plastic scale models of the Vertol 107 exist though it is needed to check the kit for your desired variant/ version. In 1/144 scale FE resin has a model and in 1/100 Dahlmann. For aircraft carrrier models, Trumpeter has a 1/350 scale pack. In 1/72 there was an old Airfix kit (also in Testors box) which was rather basic, a Minicraft CH-113 followed by a much better Fujimi kit and more recent Hobbyboss. In 1/48 scale Academy has a nice kit.