The Sikorsky S-58 helicopter was designed as an utility helicopter and also for anti submarine warfare.  It was twice as powerful as the S-55 and first flight was in 1954. The S-58 featured a 4 bladed main rotor and a 4 bladed tail rotor with the simple NACA 0012 airfoil. It was also referred to as HSSN-1  and UH-34 / SH-34 . The Navy SH-34J version had  AN/AQS-4/-5 dipping SONAR, and Automatic Stabilization Equipment (ASE), a helicopter autopilot system, which allowed the helicopter to achieve a hover and maintain position over the SONAR transducer without pilot assistance. Weapons carried included two torpedoes, mines or depth charges.

Over 2,500 S-58 helicopters were built in many variants e.g  Westland built it in license with new engine and systems and was better known as the Wessex. It had first a turbine-powered 1,450 hp Napier Gazelle engine entering Royal Navy service for ASW duties in 1961. Later Westland versions had more powerfull Napiers. The HC series featured twin Rolls-Royce Gnome engines and Wessex manufactured about 350 helicopters. 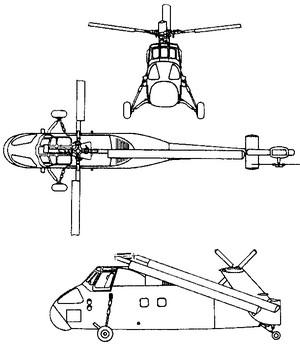 Twelve of  these helicopters were used by the Royal Netherlands Navy flying service (MLD). This one has number "134" with US serial 150729. It was delivered as HUS-1 SeaHorse and was converted into an UH-34J mid 1966. It shows the Extra Dark Sea Grey and Sky colour scheme and is kept in good museum condition at the new National Military Museum (NMM) at Soesterberg , The Netherlands.

This helicopter was used by the Belgian Air Force. Seen preserved at the Brussels museum at the Jubelpark, Brussel (Belgium).

This is a UH-34D with BuNo 150553 that flew with the USMC from August 1963. It flew with various units also in Vietnam and also from USS Okinawa until 1971. It was stored and comes from Pima. See at the USS Hornet museum at Alameda, CA.

The West-German BundesWehr obtained some 145 H-34 helicopters that were mainly used for troop transport and rescue. This is a H-34G that had a Curtiss-Wright R1820 engine with some 1,400 hp. Seen preserved at the German Helicopter museum in Buckeburg (D).

Fly Models has released a 1/32 model of the Wessex version, whereas in the old days only Combat Models had a 1/32 Sikorsky S-58 vacform.

The Netherlands Naval Flying Service (MLD) used the type as well. Enthusiasts and historians can see more on our IPMS NedMil pages here....