The Russian Mil company developed a series of helicopters including the Mi-8. It was designed as a twin-engined transport helicopter and was first flown in 1961. Also armed versions were developed and it got the NATO code name "Hip". More than 17.000 Mi-8 helicopters in several versions were produced, it (still) serves in dozens of Air Forces and with commercial operators. The type was further developed into the Mi-14 and improved Mi-17.

The Mi-17 version as is called the export designation (the Russian designation Mi-8MT) has more powerfull engines and transmission and the tail rotor is set at the left side. The fuselage is stronger and on some Mi-17 subvariants the nose shape a bit different. Also the Mi-17 has standard air filters fitted on the intakes. 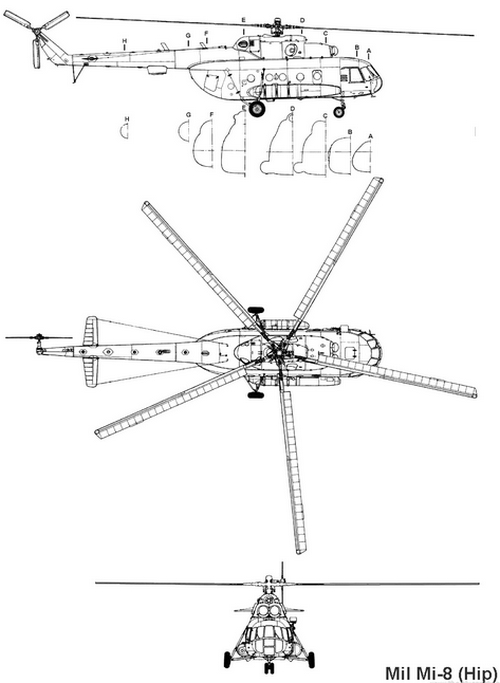 This is a Polish air force Mi-8 (c/n 10631) with code "631" in an attractive white-red scheme. It has a passenger interior and rectangular windows and the tail rotor is at the usual right side of the tail boom. It was seen at Texel airport (NL).

This Mi-17AE of the Polish air force appears to be used for medevac and SAR duties. The AE is the Polish designation as this helicopter was modified by the Polish PZL company for these roles. The helicopter code is "606" serial no 106M06. The walk around also shows a lot of interesting interior and cockpit details and clearly the left hand side tail rotor as used for Mi-17. This helicopter was seen at the Texel air show in 2018.

Quite a few plastic scale models exist of the Mi-8. It started with a rudimentary KP kit in 1/72, quickly superceeded by better models including a very good Bilek/ Italeri and the Zvezda/ Revell model (the same mould). Also HobbyBoss has a good model. In 1/48 scale "Navigator" has a model and Trumpeter has a 1/35 scale model.

For the Mi-17 1/72 scale kits are available from KP and a very good Zvezda kit.

This walk around page was first created March 2016 by M. de Vreeze; note that all photo's are strictly copyright by their contributors on behalf of IPMS Nederland and may not be published elsewhere without prior written permission.