The Sikorsky S-65 / CH-53 helicopter family were designed as heavy transport helicopters in the 1960s with several versions were developed with "Stallion" nick names. The engine is usually the GE T-64 and it has a large cabin and cargo hooks. It was operational in 1967 and also used in Vietnam. The H-53E is the 3-engined version with an extra seventh rotor blade and stronger transmission etc. The MH-53E has a mine sweeping role. Several countries used the family type in either version including Germany, Iran, Austria, Mexico, Japan, Israel. 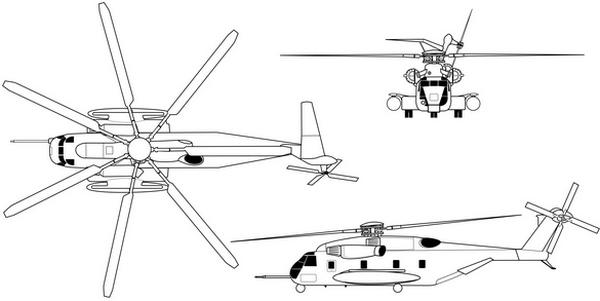 This helicopter is a 3-engined special operations version with defensive avionics and called Pave Low IV. This particular aircraft s/n 73-1652  was used by 16th AFSOC at Hurlburt field, Florida.  It was seen at the Pensacola museum, Florida.

This helicopter is probably a CH-53E. It is a 3-engined version with tank boom. This no. "67" is used by the US MARINES Corps and was seen at an Open Day at at Pensacola, Florida.

This is a photo collection of CH-53 helicopters as used by the West German army (called "HEER" in German) in the 1980s. These helicopters were used for heavy transport.

Several scale models exist of the CH-53 and variants with 2 or 3 engines, so check the desired variant and kit. In 1/72 scale from Airfix, Fujimi, Academy, Revell / Bilek. In 1/48 from Revell, Wolfpack, Academy. In 1/144 a kit by Revell.

This page was created October 2016 by M. de Vreeze