The American Sikorksy company developed the HSS-2 / SH-3 Seaking like family of helicopters. A USAF version was the (C)H-3 or also designated S-61R with a new rear fuselage with a ramp for vehicles and also a tricycle landing gear with a nose gear. First flown in 1963, it was assigned air crew rescue roles. During the Vietnam War, any CH-3 was a welcome sight by downed air crews as the "Jolly Green Giant" was called to rescue them.

An updated version was the CH-3E with stronger 1,500-horse engines. Usual accommodation was a crew of two or three and capacity for 30 troops or 15 stretchers. Some users call the LONG RANGE version HH-3F the Pelikan (like the US COAST GUARD). 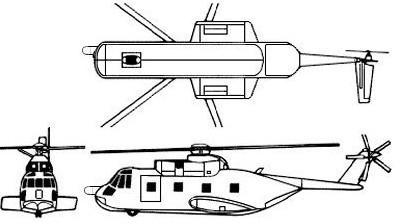 Here a rescue HH-3 Pelikan "coded 15 -20" is shown of the Italian Aeronautica. Seen in the eighties.

Just a few plastic scale models of the CH-3 were released, like an old 1/72 kit by Revell.

This page was created February 2017 by M. de Vreeze