The French company Sud Aviation designed a large helicopter beginning sixties based on the smaller SE 3200 Frelon. It was a big helicopter with a 5 men crew and cabin for 27 troops and it was fitted with 3 Turbomeca Turmo IIIC engines. First flight was end 1962 and a year later several speed records were established. Sud Aviation later was merged into Aerospatiale and the Super Frelon known as SA 321. Service entry was in 1966 and about 110 helicopters were manufactured. They were used both in civilan roles as well as military tasks and exported to Israel, Iraq, South Africa, Libya and China. License production was also done in China as the Z-8. 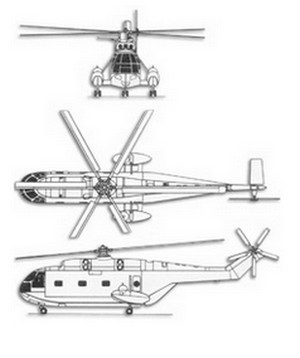 A few plastic models were issued of the Super Frelon. Heller came with a spectacular kit in 1/35 scale in 1975 (also released by Aurora). In 1/72 scale MACH2 has a short run kit.