Here the page of "Military operators".

Look for civilian Seaking operators at our page 1..... 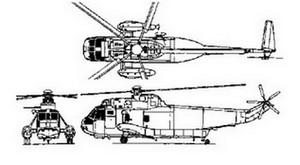 The S-61 was also used widely by the Military all over the world. It was known at various names and also the Sikorsky S-61 was license built by Westland Helicopters U.K. Many S-61 choppers were delivered to both Royal Navy, Royal Air Force RESCUE and Royal Army.

Here a RAF RESCUE S-61 is seen in a yellow livery.

This Sikorsky SH-3H Sea King is coded 160172/NT-66 with serial c/n 61128. It has been painted with the "66" and "68" on the other side as Seakings that were used in the Apollo Moon program for capsule recovery in the Pacific. (But this actual aircraft has another origin). Seen at the USS Midway carrier museum, San Diego.

This Seaking with registration ZA137 and Code 20 is used by the Royal Navy. Seen at Gilze Rijen AFB , June 2014

Seaking mk.48 Belgian Armed Forces
This Seaking mk.48 code RS-01 (Rescue 01), WA832 flew with the air force component of the Belgian armed forces. This helicopter was operational end 1975 till end 2008. It is on display at the Brussels air museum at the Jubelpark in Brussel.

This same Seaking was also photographed by Cees Hendriks at the same show:

This SH-3H BuNo. 148999 c/n 61-073 was built in 1961 as a SH-3A and flown by various US Navy units. June 1967 it recovered the space crew of Gemini 4 flying from the USS Wasp. In 1975 a conversion was done to SH-3H standard and it was again deployed at various US Navy carriers. This Seaking also flew in the motion picture "Apollo 13" as the famous Apollo "66" Seaking. It got various recovery markings painted on. In 1994 this Seaking went into storage at Davis Monthan. In 2005 it was moved to the USS Hornet museum at Alameda, San Francisco area, Ca.

Look for scale model info and civilian Seaking operators at our page 1.....

These walk around pages were first created January 2012 by M. de Vreeze