The Kaman company developed an helicopter with a peculiar rotor system with 2 intermeshing rotors. The layout was pioneered by the German Fletcher with the "Kolibri". First flight of the Huskie with a piston engine was in 1947 and several (test) aircraft were made with several designations like HTK-1 / HOK-1 / HUK-1 and H-43. The two turbine engined version H-43B first flew April 1953 and it was the first helicopter with turbine engines. The USAF ordered the type and it was used for many rescue missions, also in Vietnam. Eventually some 193 Huskies were manufactured. Some other Air Forces used Huskies as well like Birma, Colombia, Iran, Morocco, Pakistan and Thailand. 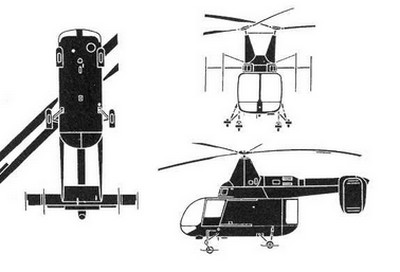 This HH-43F , Bur.no 62-4513 has an aircraft grey USAF scheme. It is on static display at the Castle Air Museum at the former Castle AFB in Atwater, California.

This HH-43F has a code "62-4547" and a nice US AIR FORCE "Rescue" paint scheme. It is seen well preserved in the Hubschraubermuseum in Bückeburg, Germany.

Some plastic scale models of the Huskie were released: an old 1/48 kit by Aurora and in 1/32 scale an old kit by Hawk (later Testors and Italeri). In 1/72 a now rare Merlin Models kit and later in 2002 a rudimentary short run kit by MACH2.