The Piasecki Company in Pennsylvania designed as a carrier helicopter starting in 1945 for rescue missions. Designated XHJP-1, the prototype flew March 1948 and had a dual rotor configuration and a single radial engine. It had a crew of 2 and could carry 4 service men. Designated later HUP it entered service with the US Navy in 1949. It was also ordered by the US Army as H-25 Mule but proved not suitable for the intended role and many Mules were transferred to the US Navy.

The Piasecki company changed its name in 1956 to Vertol Aircraft Corporation and subsequently was bought by Boeing Aircraft Company in 1960, and became Boeing-Vertol.

The HUP also served with the French navy and Canada. Approx some 350 were manufactured in several versions. 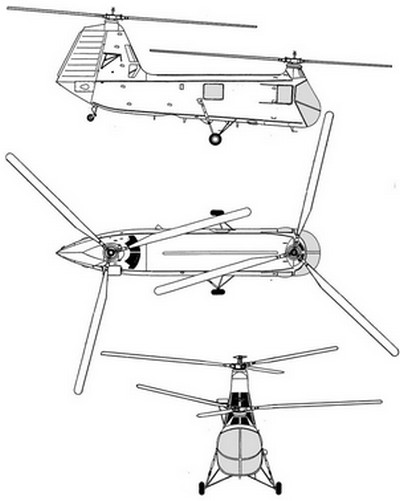 A few scale models are available of the Retriever:  in 1/72 scale an old SIGA model followed by a short run MACH2 model but now there is a better Amodel kit. In 1/144 scale from MiniWings and in 1/48 scale from Battle Axe.