The Sikorsky company developed VS-316 later known as the R-4 as a two-seat helicopter. It has a 3 bladed rotor and radial engine. First flight was January 1942 and it was the first helicopter produced in series with some 130 manufactured. Some were used at the end of the Second World War in Burma and China.

In the US Navy and in the US Coast Guard the type was designated HNS-1. In British service, it was known as the Hoverfly and the RAF set up a helicopter training school january 1945 at Andover. 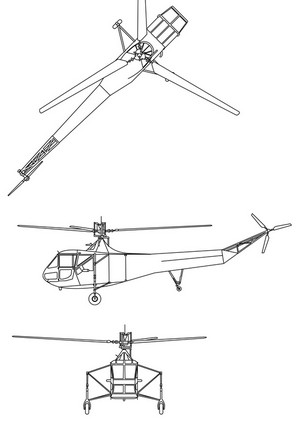 This XR-4C is a prototype helicopter and was seen at the Steven F.Udvar-Hazy Center of the Smithsonian, Chantilly, Virginia. The right fuselage is open so the structure can be seen.