In the 1950s, the Soviet Government issued a directive to design a multi-purpose small helicopter for various roles. The Kamov design buro issued a proposal with its typical co-axial rotor system, eliminating the otherwise needed tail rotor. It had flexibility in the design with a detachable rear section aft of the pilot's compartment. A small passenger cabin could be installed but also agricultural crop duster equipment. First flight of the prototype was in August 1965 and production started not earlier than probably 1968. The usual engines are a pair of Vedeneyev M14 with 325 hp fitted in pods. It was a true multi-purpose type and was used all over the Soviet Union and many other countries. Some 900 were manufactured. Some were also used by the military and it got NATO code name "Hoodlum". 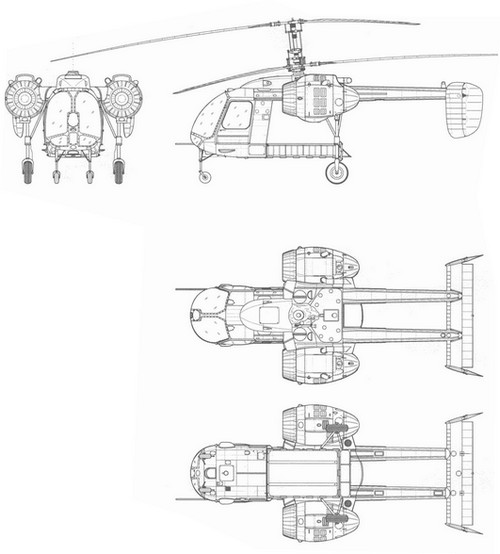 This KA-26 s/n 7505201 is an ex DDR helicopter DDR-SPL and later got registration D-HOAL. It is fitted with a crup duster. It was seen well preserved in the Hubschraubermuseum in Bückeburg , Germany.

Scale models: only one scale model kits exists of the KA-26:  in 1/72 scale Amodel has a short run kit in 2 versions.

This walk around page was first published October 2018 by M. de Vreeze; note the Copyright!