The Sud Aviation company designed in the beginning 1960s for a French Army requirement a medium sized helicopter. The SA.330 design got 2 engines and a conventional four-bladed main rotor and tail rotor. First flight was in 1965, production started in 1968. The type called Puma became a success and was manufactured by the restructured now Aerospatiale company. It was also ordered not only by French armed forces but also many other countries and exported all over the World. Westland in the United Kingdom made the type under license as well as by IAR in Romania, Atlas in South Africa and IPTN in Indonesia having assembly lines. Various versions were developed over the years with quite some modifications such as longer cabins as the "Super Puma" and various equipment. Some 700 were produced by Aerospatiale until 1987. A quite different version was the later AS.532 Cougar manufactured by Eurocopter. 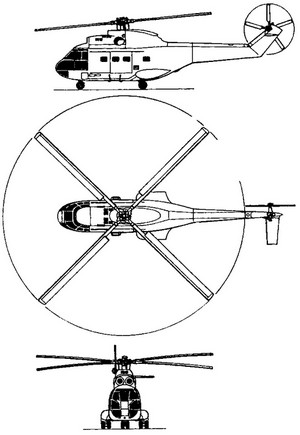 This SA.330J Super Puma is an upgraded version with a longer cabin and fitted with composite blades. It is a former Bundesgrenzschutz helicopter with s/n MSN 1596 coded D-HAXU. Later in 2006 it got a white colour scheme and civilian registration ST-AXU as operated by HELOG for UN missions. It went in 2015 for display to the Hubschraubermuseum in Bückeburg, Germany.

This walk around page was first published on October 2018 by M. de Vreeze; note Copyright! No part may be published without prior written permission by the author / IPMS Nederland.