In the Soviet Union the OKB-329 design buro headed by Mikhail Mil made a design for a 4 seat small utility helicopter and it was the first helicopter in the USSR to enter series production in 1950. It had a 575 hp Ivchenko Al-26 radial engine and 3 rotor blades. Several versions were developed (including one fitted with floats). Over 2,500 helicopters were probably manufactured from 1950 to 1965. Polish license production helicopters were designated SM-1. The type flew with dozens of air forces that were supported by the USSR. NATO code name was "Hare".

Mil would become a famous helicopter design buro in the following years and until today. 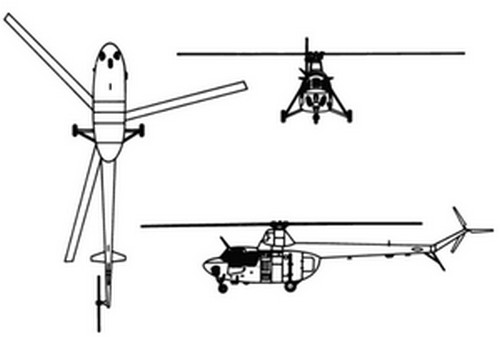 This Soviet Mil coded CCCP-05712 has a sort of gold paint finish. It was seen well preserved in the Hubschraubermuseum in Bückeburg, Germany.

Plastic scale models are the old DDR VEB Plasticart in 1/100, in 1/144 from Airkits. In the larger scales Special Hobby has a 1/48 kit. MPM had an old kit in 1/72 followed by Gran and Classic Plane. Nowadays AModel has 1/72 models in several versions.