Another helicopter of the Soviet Union design buro Mil was the Mi-2. This utility transport helicopter had 2 turboshaft engines. First flight was in 1961 and several versions were developed. Flown by a single pilot, usually 8 passengers could be transported. NATO code name was "Hoplite". It entered service in the USSR in 1965 and it was used by dozens of countries in the Communist Block (such as DDR) and other continents. Some 5,400 Mi-2's were manufactured until 1998 including license manufacturing in Poland at WSK PZL. 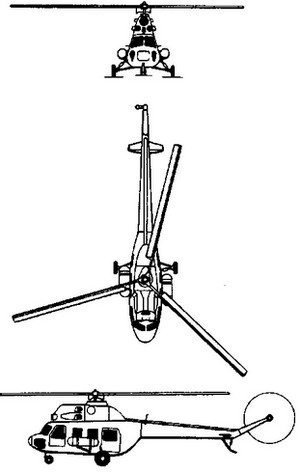 This "Hoplite" has a camouflage scheme and "556" was used in the DDR.  It is well preserved in the Hubschraubermuseum in Bückeburg, Germany.

Plastic scale models are in 1/144 from Airkits. In the larger scales Aeroplast has a 1/48 kit as well as SMER. In the 1/72 scale there was an old KP kit from CzechoSlovakia, SMER, AModel and InTech/ Mastercraft. Later a much better 1/72 kit came HobbyBoss.