The Eurocopter Tiger was designed as anti-tank helicopter during the Cold War by the French Aerospatiale and German MBB consortium under the Eurocopter consortium. First flight of the prototype was April 1991. It took quite some time to develop further for production. After the fall of the Iron Curtain, it was further developed as general attack helicopter. It was declared operational not earlier than 2008. It has a crew of two, has two MTU Roll Royce MTR390 turboshaft engines and is highly manoeuvrable. Armament may vary depending on mission. The main users are the French Army and German Army but it was also exported with over 200 Tigers manufactured. Meanwhile, Eurocopter is part of Airbus Helicopters. 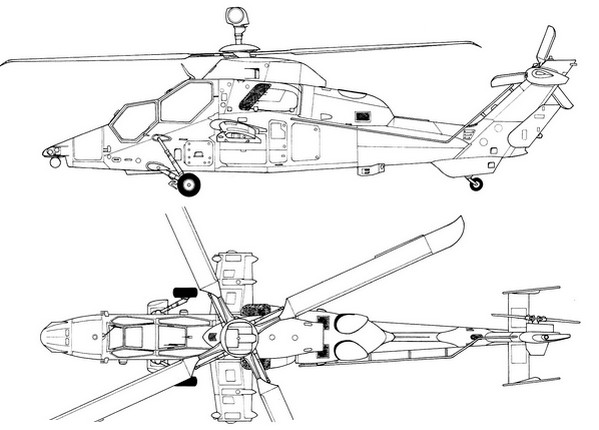 This is the third Tiger prototype PT3/98+23 which first flew on November 19, 1993 as F-ZWWT. It was seen at the German Helicopter museum in Buckeburg (D).Note that the production Tiger is quite different.

Quite some scale models of the Eurocopter Tiger were released: in 1/48 scale by Heller, Revell and Italeri. In 1/72 scale by Italeri, Revell, HobbyBoss and Aeroplast/ Mistercraft. In 1/144 by F-Toys.