The Eurocopter EC-130 is a single engine light helicopter developed from the AS-350 Ecureuil airframe. It is a wide body variant of the earlier type AS-350 B3, and was first flown on 24 June 1999. The EC-130 features an enclosed tail fan rather than the traditional tail rotor found on the older AS-350. This Fenestron has unevenly spaced blades which has the advantage of reducing outside noise by 50% compared to a tail rotor, resulting in loewer noise. It features a spacious cockpit with excellent external visibility, capable of accommodating seven tourists. The EC-130 is also quickly becoming popular within the air medical services (AMS) community, due to its large cabin (capable of accommodating one or two stretchers), wide side door and enclosed Fenestron anti-torque device. 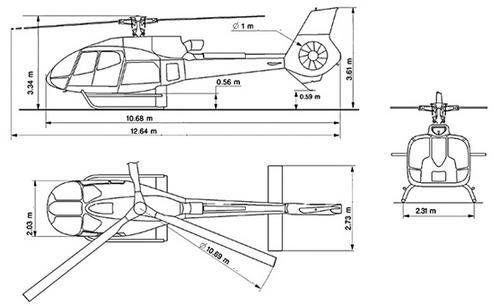 This is a civil helicopter, type EC-130B4, registration OO-ARI. It was photographed at Den Helder/ De Kooy airport.