The Sikorsky H-60 is a modern helicopter designed for the US armed forces. It features a twin turboshaft engine and can be used in a variety of roles. Design work started inh the nineteen seventies, with first flight in 1979. The SH-60 Seahawk is the US NAVY version for anti-submarine warfare, anti-ship surface warfare but also supply and search and rescue (SAR). All Navy SH-60s carry a rescue hoist. It operates both from ships and land.

The USAF and US Army operate the HH-60, UH-60 and MH-60 versions with various equipment including long range fuel tanks and refuelling capability. The type is also flown by various other armed forces. 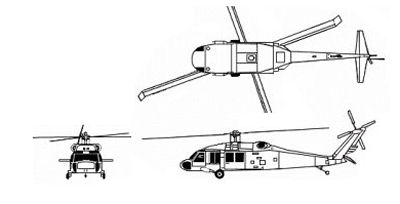 This helicopter has a low visibility scheme.

This HH-60F Pavehawk is operated by the USAF has serial 26309. It was seen fully operational during an Open Day at Nellis AFB.

Several scale models exist of the H-60 in various versions: in 1/72 scale of Hasegawa, HobbyBoss and Dragon and in 1/48 of Revell/ Italeri and Academy / Minicraft. In the larger scale 1/35 from Academy/ AFV Club and more recent Kittyhawk (see our IPMS NL review).