The Bell AH-1 attack helicopter was designed by the famous Bell helicopter company as a clear need arised in the sixties during the Vietnam war. Model 209 was designed with a long thin two seat  two-bladed single engined attack helicopter. It used components like the engine, transmission and rotor system of the Bell well known UH-1 "Huey". The AH-1 was called the Huey Cobra with the AH-1G in 1967. Several version were developed and it was the backbone of the US helicopter attack fleet that saw extensive service in Vietnam. Bell built over 1,100 AH-1G helicopters between 1967 and 1973.

Another version is the twin engined AH-1J as used by the U.S Marine Corps. The engine is a pair of Pratt and Whitney T400 engines in a "Twinpack". It also got a new nose gun turret. The type was also exported and used in Israel and Japan. The later AH-1W was used in wars like the Gulf War. The U.S Army phased out the AH-1 in the nineties. But still, the U.S Marine Corps operates the twin-engined AH-1W Super Cobra and AH-1Z Viper. 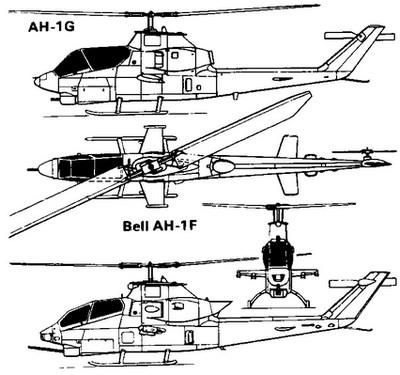 Several scale models exist of the AH-1. In 1/72 there was a very basic Matchbox kit, later followed by Fujimi and Hasegawa. Copies are from Mastercraft and other. Recently, HobbyBoss and AZ Models issued several nice 1/72 kits.

In 1/48 Revell-Monogram has kits like Italeri, the unknown brand "Seminar" and also Kitty Hawk. In 1/32 scale Revell has a good but basic older type Vietnam AH-1 Huey Cobra and in the 1/35 scale Academy and MiniCraft. In the small 1/144 Mini Wings has kits.

This walk around page was first published November 2014 by M. de Vreeze