The Cierva C.30 was an autogyro that first flew in 1934. It had a 3 bladed rotor and radial Genet Major engine. It was license manufactured from 1934 by A.V. Roe as C.30A with a slightly bigger undercarriage track. Some 148 were built in the U.K.

Even in Germany license manufacturing was done by Focke Wulf as Fw.30 with some 40 made with a Siemens Sh.14 engine.

The Royal Air Force used several C.30A in the 1930s from the school at RAF Old Sarum near Salisbury and during the Second World war it was used for radar station calibration work. 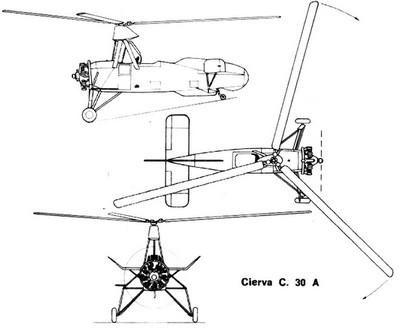 This aircraft  is on display at the Science Museum, London, U.K.

A few scale models exist: in 1/48 scale from Lawrence design and JMGT. In 1/72 scale from Azur, Merlin, Miku and a nice RS Models kit.