The F-86 Sabre was one of the first American jets, being a transonic jet fighter aircraft. Produced by North American Aviation, the Sabre is best known as America's first swept wing fighter which could counter the similarly-winged Soviet MiG-15 in high speed dogfights over the skies of the Korean War. (see also Walkaround of the old F-86 Sabre...). 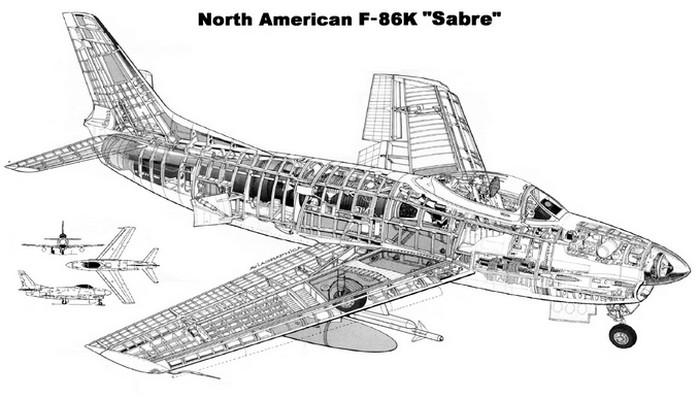 The type was developed in various versions afterwards, including the Sabre-Dog F-86D and F-86K used by many NATO air forces. The F-86D Sabredog had a completely different fuselage with more room for fuel and rocket armament. The F-86K was 8 inch slightly longer than the F-86D. The extension is in the fuselage mid-section. It got an APG-37 radar in a radar nose and a MG-4 fire control system. It carried no rockets in a retractable fuselage (like the F-86D), but got canon armament with four 20 mm (.79 in) M-24A1 canons. FIAT of Italy did license building. The "K" was called by the Dutch pilots the "kaasjager". The type was initially upon delivery fitted with the slatted "6-3" wing but later the remaining Dutch F-86K aircraft were retrofitted in their service life with a different bigger "F-40" wing and systems to fire the Sidewinder missile.

The Royal Netherlands Air Force ("Koninklijke Luchtmacht") also operated the F-86K type seen here in the gallery. Two aircraft are shown that were in the old Dutch AF museum MLM in Soesterberg. Seen on a pole outside the museum is Q-283. It has the later style "F-40" wing.

The second aircraft with code Q-305 is actually an Italian "FIAT" F-86K (serial MM6271) but painted in a Dutch AF scheme. It was on display in a hall at the old MLM museum in Soesterberg.  Accuracy of all stencilling is not guaranteed as it a repainted aircraft. It has the later style "F-40" wing that was also retrofitted on many F-86K later in their operational career.

And here another series of this same aircraft while being moved....

These rare photographs show the cockpit of the F-86K of the same aircraft at the MLM. F-86K aircraft that got the Sidewinder firing capability also got some additional "black boxes" inside the cockpit and an extra box fitted inside the windscreen. These are seen here in these photographs. Also, the ejection seat is seen.

Note that the old museum has closed mid 2013. End 2014  a completely new military museum has opened at the former Soesterberg Air Base. See www.nmm.nl

The French air force received approx.62 F-86K Sabres during the Cold War. These were license manufactured by FIAT and delivered in 1956-1957. This aircraft with serial 55-4841 is in the colours of Escadron de Chasse 2/13 "Alpes". It is on display at the Musee de l'Air et de l'Espace at Le Bourget airport, Paris.

Plastic model aircraft kits exist in 1/72 scale of Special Hobby F-86K but it has some defects like an incorrect wing.

In 1/32 scale only old ID/Tiger vacuform F-86D fuselage was issued many years ago to be combined with the wings of a Hasegawa and/or Kinetic kit and it needs conversion. Than, Summer 2013, a AEROPOXY F-86K conversion kit has been released that needs to be combined with the wing (and parts) of either the F-86E Hasegawa or Kinetic kits. But now KittyHawk has released November 2015 a very nice 1/32 scale F-86K.