The Mikoyan-Gurevich OKB design buro is a well known Soviet design buro. Following Second World War designed aircraft, they started with jet fighter design. In the nineteen-fifties, after the MiG-15 and MiG-17, the MiG-21 came that was designed as a very fast MACH 2 capable fighter. After numerous wing designs, the final design got a delta main wing and conventional tail. It got NATO code name "Fishbed".

It is one of the most-produced supersonic jet aircraft in aviation history and the most-produced combat aircraft with over 10,000 aircraft produced. Many countries in the Eastern Block hemisphere used the type and also it was "exported" to many countries around the World. It was also license built including by HAL of India. In many conflicts like Vietnam War, Middle East and India-Pakistan wars it was used.

Many versions were developed with later types being significantly different from early types. Nowadays, the type has been replaced by more modern aircraft.

Main versions of the MiG-21 are:
The MiG-21F was the first production aircraft with two NR-23 cannons at the lower forward fuselage that were integrated in lower air brakes. The pilot had the SK-1 ejection seat and used a basic radar. The pitot tube is below the intake with a forward hinging canopy. It could also carry fueltanks and 2 bombs. The MiG-21F had the initial small 66 cm diameter main wheels. Later on also the port lower NR-30 canon was removed.

The MiG-21 F13 based on the F and could fire K-13/R-3S (NATO called "ATOLL")  missiles, on the early versions fitted on APU-28 rails and later APU-13 rails. This version could also fire rockets from pods. The forward hinged canopy also had to the rear a transparant extension to the thin spine. The large pitot tube is still below the intake.
China manufactured this version as Chengdu J-7. The initial version of the J-7 was a "copy of the MiG-21F-13" but the Chinese later went their own way and developed several versions of their own, even with a cranked wing.

In 1961 the MiG-21PF appeared as "all-weather" interceptor and it was also exported to Warsaw Pact countries. The fuselage was changed and also the larger intake with the RP-21 radar and no cannon?. The canopy still hinged forward but the rear transparent extension was discarded with a fatter spine immediately aft of the single canopy faired into the thinner spine to the tailfin. The pitot moved to the top of the center intake and the NR-30 starboard gun removed. The later standard larger main wheels of 80 cm diameter were introduced with thicker fairings above the wing root. Versions exported to the Third World had less sophisticated systems and often had a wider-chord vertical fin and with brake chute fairing at its base. (HAL built it also under license in India).

The MiG-21PFS looked similar to the MiG-21PF but with the wing had "blown flaps" and also the broader fin. Later versions of the PFS got also a sidewards opening canopy with separate front windscreen.

The MiG-21PFM came in 1964 and was quite different than the previous versions. It got a much broader tail fin and no cannon. The canopy was split with a windscreen and a sidewards hinged aft canopy. Later versions again introduced a canon, now a GSh-23 cannon in an underbelly pod and the Kh-66 air-to-surface missile could be fired. This version was also mainly used by the Warsaw Pact (PFMA and PFMN by Poland, RFMN Romania and SPS by the DDR). (Probably the zero-zero KM-1 ejection seat was also introduced).

The MiG-21R from 1965 was the next generation and could carry a reconnaissance pod below the fuselage. The spine was thick and made larger for extra fuel. Exports were the RF for Egypt but also another MiG-21RF was the upgrade with R13-300 engines as in the MiG-21MF. The pitot (without vanes) was situated on top of the intake to the right. Often on the wing tips, antenna fairings are installed.

The MiG-21S of 1964 was only used by the Soviet Union and based on the "R". It got the RP-22 radar and the airframe was different from that of the MiG-21PFM by using the same saddle tank as in the MiG-21R. The MiG-21S could carry the GP-9 cannon pod and had four underwing hardpoints and the 2 outboard ones could also fuel drop tanks. It could also fire the R-3R missile.

Upgrades and improvements were continuously made.

The MiG-21M from 1968 was the export variant of the MiG-21S with less sophisticated systems but with a built-in twin barrel 23mm GSh-23L cannon. (also HAL license built). CzechoSlowakia had the MiG-21MA re-engined with the Tumansky R13-300 engine.

The MiG-21SM was an upgrade of the MiG-21S using the R13-300 engine and with a built-in GSh-23L cannon, as well as a considerably updated avionics package.

The MiG-21MF appeared in 1970 and  NATO called it "Fishbed-J". It was based on the "M" and the export version of the MiG-21SM, with RP-22 radar and Tumansky R13-300 turbojet. The aft canopy got a "rear view" mirror on top. The spine is thick and looks straight aft of the cockpit section and runs a bit into the vertical tail. The choice of weapons loads was increased with the addition of the R-60 (NATO: AA-8 "Aphid") and later the R-60M IR-seeking AAM. This version was also licence-built in India by HAL as the Type 88.

There are small differences between MF's depending on the Soviet manufacturing plant. MF's made at Sedivka Gorki have a deep cut-out on the sides of the engine exhaust and an oval-shaped bulge in front of the lower fuselage main gear bay. MF's made a Stracena Moskou have a small cut-out at the exhaust, s-shaped bulge in front of the gear bays and also a large raised oval panel on the top of each wing halve. There are also some tiny differences in ammo- and maintenance hatches.

The MiG-21SMT of 1971 (NATO "Fishbed-K") was based on the MiG-21SM with increased fuel capacity in its much larger and bulky spine with runs all the way the vertical tail base.

The MiG-21bis from 1972 (NATO "Fishbed-L/N") had the Tumansky R25-300 turbojet engine and had a great number of other advances over previous types. It could fire the R-60 missiles and had a new radar. The spine is a bit longer than on the MF and runs half way the vertical fin (but significantly thinner and smaller as to the SMT) and the intake ring is slightly different than on the MF.

The MiG-21ST retained the older style smaller spine/saddle tank of the MiG-21bis and was thus externally indistinguishable from the MiG-21bis.

In several countries upgrades were done. Bulgaria updated the MiG-21MFR in 1995 with also recce pods. Much later after the collapse of the Berlin Wall the MiG-21MFN was the Czech Air Force MiG-21MF upgraded with NATO standard avionics. The MiG-21bis-D of Croatia was modernized for NATO.

Trainers
Several MiG-21 trainer versions with two seats (student front and instructor rear) were developed. The MiG-21U that appeared in 1961 was the two-seat training version based on the MiG-21F-13. There is a windscreen and two sidewards separate hinging canopies. It has two airbrakes: one below aft of the nose gear and one aft of the main gear bays. The small fin was retained and later production "U" aircraft got the broader fin as of the PFM and the larger 80 mm main wheels.

The MiG-21UM from 1968 referred to by NATO as "Mongol-B" was the two-seat training version of the MiG-21MF but it looks that it retained the "small F intake" but the large tailfin like the MF. Seats are KM-1U for the student and KM-11 for the instructor. The instructor has a foldable periscope at the aft canopy section. Four underwing pylons are possible. 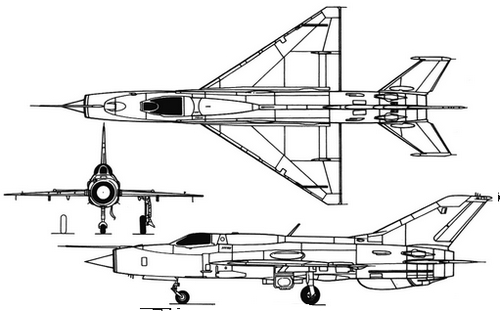 This Mig 21 PFM is located in the Dutch museum Aviodrome at Lelystad airport (The Netherlands). This aircraft is a former East German aircraft with code" 473".

This MiG-21PFM  has code Red "47" and  was built as c/n 940MS13. A former Soviet Air Force aircraft, it became the gate guard at Kluczewo AB, Poland which closed in 1992 and “Red 47” eventually made its way to the new "National Military Museum" (N.M.M.), Soesterberg, Netherlands. It seems to have a silver paint applied over the natural metal and the paint is starting to come off. The aircraft is outside and in a rather poor condition.

This is a Mikoyan-Gurevich MiG-21F "Fishbed C" of the former CzechSlovakia air force during the Cold War. This particular aircraft does not have the smaller windows aft of the canopy in the spine so seems to be  a "MiG-21 F". Coded "1103" in a partly metal and partly silver dope scheme. It is on display at the Musee de l'Air et de l'Espace at Le Bourget airport, Paris.

This MiG-21 F was used for educational purposes at Bolling AFB Washington. Coded "63" it is located at the Steven F. Udvar-Hazy Center in Chantilly, VA and the museum is part of Smithsonian collection.

Some twenty MiG-21 F13 fighters were delivered to the Indonesian leftist regime in 1962 and a few MiG-21U trainers. At that time Papua New Guinea was still in Dutch hands. This MiG-21 F-13 coded "2160" is an early version of the type and this aircraft has special scheme. It is preserved at the Indonesian Air Force Museum "Pusat TNI AU Dirgantara Mandala" at Yogyakarta in Central Java, Indonesia.

Also check out a 1/72 model of this particular aircraft made by one of our IPMS members....

This is an early version of the MiG-21, the F-13. This aircraft is a former CzechoSlovakian Air Force aircraft that was license manufactured as the Aero S-106 in CzechoSlovakia during the Cold War. This aircraft has the nose code 1112. It went probably in 2011 to the USA and is now at the Palm Springs Air museum, California, USA.

In 1/72 scale many kits were issued many years ago like from Airfix, Hasegawa and later a better KP kit. Now, far better models are available from RV Aircraft and the very good 1/72 Eduard kits which are the best in the scale. In 1/48 scale Eduard has also a very excellent kit. In the larger 1/32 scale first the old Revell kit appeared and later much better Trumpeter China kits. In all cases, check the desired MiG-21 subtype before buying an appropriate kit as there are considerable visible differences.

This walk around page was first created Summer 2013 by M. de Vreeze