The Fairchild Republic A-10 was developed in the nineteen seventies as a dedicated ground attack aircraft, armed with guns and missiles to fight against particularly enemy tanks. The Vietnam war showed a need for such an aircraft also due to the massive Warsaw Pact tank force in Europe. The A-10 was designed to be as simple as possible "situated around a GAU-8 Avenger rotary cannon".  Other systems were kept to a minimum and a large wing was designed to enable a lot of pylons and ordnance. It was only ordered and used by the USAF and deliveries started around 1976. The A-10 is also known by its nicknames "Warthog" or "Hog" and it was used in several conflicts like both Gulf Wars but also Iraq. 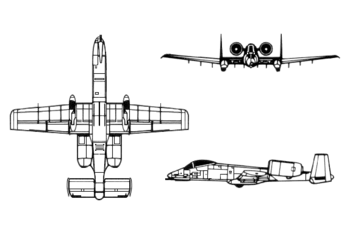 Cockpit details of an aircraft at the Air Force Armament Museum at Eglin AFB:

Also a separate A-10 nose section in grey is seen. Cockpit details are shown.

This A-10A is at the Air Force Armament Museum at Eglin AFB. It is on loan from the USAF museum and looks to be painted in a special grey scheme.

This aircraft s/n 73-1664 is a two seater A-10 converted in 1975. The idea was it to be used in adverse weather with an extra weapons officer. It was tested in 1979 at Edwards AFB but not further put into production as NAW-10, so only this one aircraft was converted. It is still on display outside at the Air Force Flight Test Museum near Edwards, CA.

In 1/72 scale several good kits of the A-10 were issued. In 1/48 also many kits appeared like those from AMT-ERTL, Monogram-Revell, Tamiya and Hobbyboss. In 1/32 scale Trumpeter came with a long awaited kit in around 2000. (they also had a NAW-10 two seater in 1/32, and this aircraft is in one of the walkarounds).

This walk around page was first created August 2013 by M. de Vreeze