The McDonnell FH-1 Phantom was designed for carrier operations for the US Navy. It was one of the first carrier based jet aircraft. Development started during the Secobnd World War, but American jet experience was virtually not existent at the time. Also, swept wings were still a bit unknown, do the design was fairly conventional, with 2 engines and gun armament in the nose. The first prototype flew January 1945 and crashed later end 1945. But the type was able to operate from a carrier and could fly over 500 kts (800 km/u). Its front-line service was relatively brief and only a small group of Phantoms was actually used, the US Navy used abou 60  FH-1  aircraft. The first Phantoms were delivered to fighter squadron VF-17A August 1947. Some  were also delivered to United States Marine Corps squadron VMF-122. Three Phantoms used by the Naval Air Test Center were also flown by a unique demonstration team called the Gray Angels. The "Grays" flew in various air shows during the summer of 1947. The type was with drawn before the outbreak of the Korean War as it was replaced with F2H Banshees and F9F Panthers. 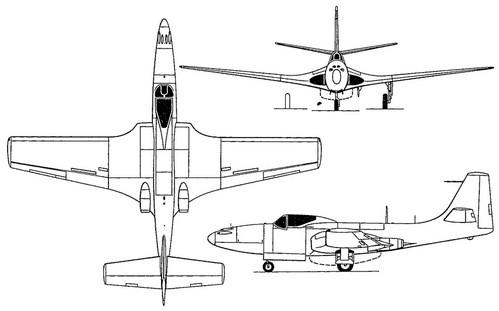 This aircraft has S/N 111793 and is located at the National Museum of Naval Aviation, Pensacola, Florida.