The F-5 was developed by Northrop as a lightweight multi-mission aircraft in the nineteen fifties capable of speeds of about Mach 1.4. It was aimed at air forces that had no big budgets available and the USAF did not really put in big orders for this plane, only a dozen being evaluated in Vietnam. But the USAF did adopt the T-38 Talon trainer that was based on work on the F-5 as the world's first supersonic trainer. The F-5A prototype, the N-156, was ready for  flight test in 1959. Later on many orders came in from various nations like Canada, Greece, Iran, South Korea, Libya, Morocco, Netherlands, Norway, Philippines, Spain, Taiwan, Thailand, Turkey and South Vietnam. Many F-5 were delivered through the Military Assistance Program to various countries, including NATO. Overall about 650 F-5As and 200 two-seat F-5B aircraft were built.

Of the F-5, several variations were developed, based on specific air force specs of various countries. The NF-5 was developed for the Netherlands Air Force and was based on the Canadair CF-5. This F-5 version has two more powerfull engines and some extra equipment as compared to the usual F-5A. The NF-5A is the single seater and the NF-5B the two seater.

( Note: Later on, the F-5 was used as a starting point for the  improved International Fighter Aircraft (IFA) program. The result was the F-5E Tiger II. Compared to the F-5A, it was lengthened and enlarged, with increased wing area with and more sophisticated avionics. 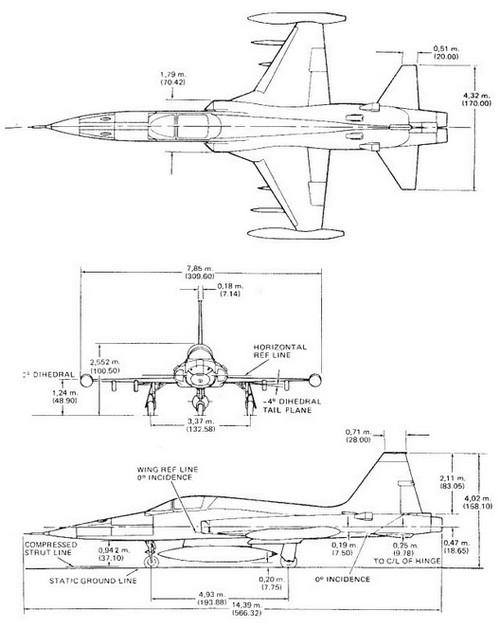 This two seater NF-5B aircraft was photographed at the MLM museum in Soesterberg, The Netherlands.

Various NF-5A aircraft used for aerial demonstrations by the Royal Netherlands Air Force, such as the Double Dutch pair and a single demo aircraft. Scanned from Slides.

This F-5A (c/n 7030) coded "207" is a former Royal Norwegian air force aircraft.  A lot of detail is seen here including full cockpit details, undercarriage but also the openend up hatches. It is on display a long way from home at the Western Museum of Flight , Torrance airport, California (USA).

Various scale models exist of the F-5. In 1/72 scale, for the NF-5 type, the best kits are from ESCI /Revell re-issue. In 1/48 there was an old Fujimi kit, but AFV has nowadays much better models.