The F-84F Thunderstreak was, although using the same designation number as the Republic Thunderjet F-84, a completely new aircraft. It got a swept wing but also a quite different fuselage than the Thunderjet. Many problems were encountered during development with the first aircraft ready in 1952. Stability problems occurred, resolved with a new all moving taiplane. The first operational Thunderstreak was delivered to the USAF in 1954. Over 2,300 aircraft were produced with over 1,300 delivered to NATO allies amidst the Cold War, including the Royal Netherlands Air Force (KLu).

The RF-84F Thunderflash is a reconnaissance derivative (see walk around here...) 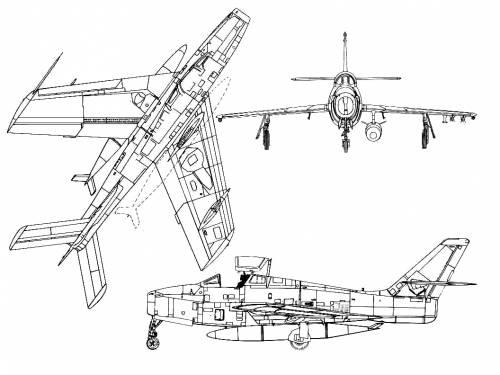 This F-84F Thunderstreak with no.51-9432  and coded FS-432  is now at the March Field Air museum in California, USA. The paint scheme is not original but the photo's show details of the type.

This F-84F-61-RE Thunderstreak coded P-226 was operated by the Royal Netherlands Air Force (KLu Koninklijke Luchtmacht). Some 180 Thunderstreaks were delivered under the MDAP in the 1950s during the Cold War. The KLu operated the type until 1970. This aircraft is on display at the National Dutch Military museum (NMM) at the former Soesterberg air base, The Netherlands.

The French Armee de l' Air also used Thunderstreaks in the 1960s and 1970s. This F-84F has code 28875 and a bare metal scheme. It is on display at the Musee de l'Air et de l'Espace at Le Bourget airport, Paris.

The Belgian air force operated nearly 200 F-84F Thunderstreaks in the 1960s and 1970s. This camouflaged aircraft coded "FU-30" is situated in the Belgian Luchtvaartmuseum in the Jubelpark, Brussels (B).

Various plastic scale model kits have been issued in the last 50 years of the Thunderstreak, often in odd scales. In 1/72 the Airfix and Italeri kits are well known, the PJ resin kit being better with more detail. In 1/48 the Monogram (Revell) kit was quite good as well as the Kinetic kit.

The Netherlands Air Force used the Thunderstreak and Flash. Enthusiasts, modellers and historians may look at the KLu Operational History at our IPMS Nedmil pages here....