The Aero L-39 Albatros was developed by the Czechoslowakian Aircraft company AERO as a high-performance jet trainer aircraft for the Warsaw Pact. It was to replace their L-29 Delfín trainer. The L-39 first flew end 1969 and production started in the seventies. It had a Soviet made jet engine, the Ivchenko AI-25TL. It was very good trainer and the basic trainer is unarmed, but has two underwing pylons for drop tanks and practice weapons. The light-attack version exported to many countries got pylons for rocketpods; the L-39 ZA version got a gun set in an external fairing below the cockpit. Over 2500 aircraft were produced and it was very succesful aircraft and many were exported to Warsaw Pact/ Easter block allies all over the world.

( Nowadays, the L-39 has been developed into a L-159 which has a more powerful engine, advanced avionics and a single upwards tilting canopy ). 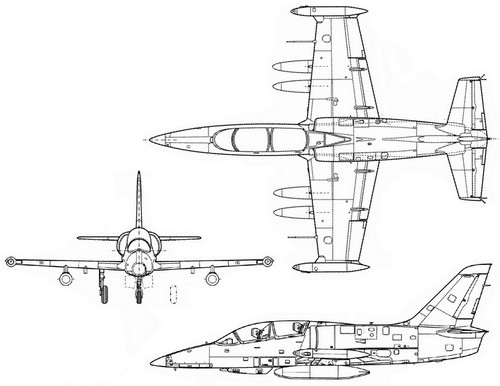 This L-39C is/was used by the Dutch civilian operator Skyline at Eelde and was seen at the Gilze Rijen Open Day June 2014. It carries 2 underwing fueltanks. Many details are common to almost all L-39 versions.