The A-37 / T-37 was one of the few armed aircraft designed by Cessna in the nineteen sixties. Originally designed as a T-37 trainer with side by side seating for the USAF for training jet pilots. Later a version was developed for the ground attack role and FAC role in the Vietnam war from 1967.

The T-37 training version was affectionally known as the "tweety".

Many aircraft were "provided" to US supported countries in South America but also South Vietnam at that time. Nicknamed Dragonfly, or Super Tweet, some still remain in service. Some aircraft are even privately flown. 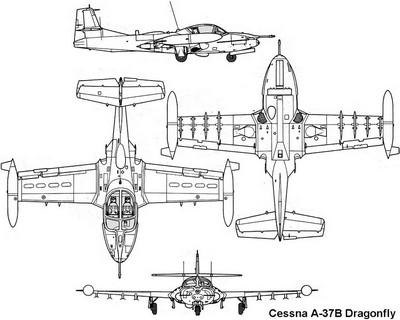 This aircraft, nicknamed the "Dragonfly" is a A-37B has markings of serialno 710790 and a camouflage scheme. It is pre. served outside the desert at March Field museum, Ca. USA

This T-37B coded 56-3537 was seen at the Castle Air Museum at the former Castle Air Force Base in Atwater, California.

In 1/72 scale first an old Hasegawa kit was issued but now the far better Academy is to be preferred. In 1/48 Monogram had a kit and more recently Trumpeter.