Walk around - Boeing B-47 Stratojet

The Boeing B-47 Stratojet (company Model 450) was designed in the nineteen forties as a bomber with jet engines for long-range missions and it had a swept wing which was new at the time. It was developed in the Cold War for the USAF and was to fly at high subsonic speeds with no les than 6 engines at high altitudes to avoid enemy interception and to drop nuclear bombs.  It entered USAF service in 1951 with the Strategic Air Command (SAC). It luckily never saw combat as a bomber. A few aircraft were adapted for photo reconnaissance, electronic intelligence and weather reconnaissance, remaining in service until 1969. 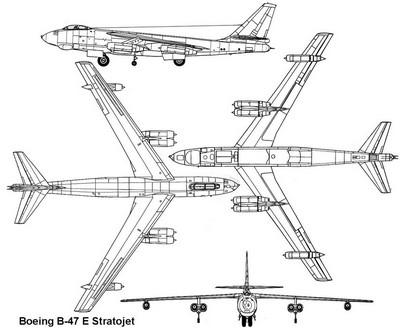 Most pictures show the B-47E at the March Field Museum, Riverside (CA), USA.

This B-47E-25-DT was manufactured in 1952 and put out of service end 1960s. It is owned by the USAF museum. It was prepared for a ferry flight and made the last B-47 flight in 1986 on its way to the former Castle AFB. It now is on proud display at Castle Air Museum, Atwater, USA.

The very old 1/72 model of Hasegawa is the only one in this scale. Contrail had a rudimentary large 1/48 vacuform and Academy and Hobbycraft have  smaller 1/144 scale kits.