The Panavia Tornado aircraft was an European initiative to design and manufacture a multirole attack aircraft for Europe's air forces. It was jointly developed and manufactured by Italy, the United Kingdom, and West Germany starting in the nineteen sixties.

The Tornado design has two engines, a variable-sweep wing and a two man crew.  There are 3 major variants: the Tornado IDS (interdictor/strike) fighter-bomber, Tornado ADV (air defence variant / interceptor) and later on Tornado ECR (electronic combat/reconnaissance). The first of several prototypes flew on August 1974 and the Tornado was introduced into service in 1979–1980. It had numerous problems and cost overruns, but nevertheless hundreds of aircraft were ordered by Germany, United Kingdom and Italy. Also the Royal Saudi Air Force (RSAF) bought the type, the only export operator. Nearly a 1,000 aircraft of all variants were manufactured.

The Tornado IDS was made as GR1 for the Royal Air Force with over 200 delivered. The GR1A was the reconnaissance version with no cannon. Over 140 aircraft were later upgraded to GR4 standard. The MLU upgrade had new systems and could deliver advanced weaponry. The GR4A is the reccon version.

The Tornado ADV long range interceptor variant was desired by the RAF as replacements of the BAC Lightning and were marked as F2 and F3.  The ADV was also used by Saudi Arabia and Italy. This version is longer than the IDS and ECR with in the nose the Foxhunter radar,  one cannon and a retractable inflight refuelling probe. The ADV F2 was an intermediate series and the even longer F3 was the main RAF interceptor (until the EuroFighter Typhoon arrived).

Another variant is the Tornado ECR and is used by Germany and Italy. It is used for Suppression of Enemy Air Defences (SEAD) with first delivery in 1990. It can fire the anti-radiation AGM-88 HARM missile. The German ECRs do not carry a cannon.

The Tornado saw combat in various wars like the Gulf War, Kosovo, Libya, Syria and so on. In the 21th century the remaining attack Tornado's are gradually replaced by the EuroFighter. 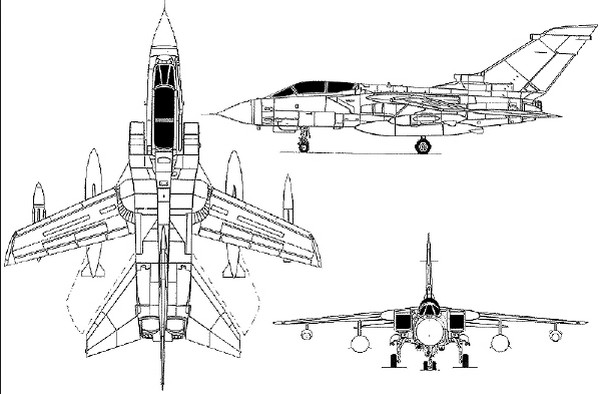 The German Luftwaffe still uses the GR4 attack version of the Tornado. Training is also done in the USA with a permanent detachment. These German GR4's , the "46+05" and "43+92", were seen at Pensacola air show, Florida USA.

Many plastic scale models exist of the Tornado. The very first 1/72 one was of Airfix, but now many models in 1/72 scale exist of several variants. Hasegawa, Revell, Italeri have all kits in 1/72. In 1/144 Crown was the first followed by Dragon. In 1/48 Airfix, Revell, Italeri, Hobbyboss have kits. Revell has a large 1/32 scale model, that appeared in various versions; their ADV F2 was a basic kit and is very rare now, but the excellent IDS 1/32 kits have been released several times.

Large scale enthusiast can see a 1/32 Tornado ADV F3 conversion here by one of our members...