The English Electric Lightning was developed in the nineteen fifties as a true supersonic interceptor in the Cold War era. It was designed, developed, and manufactured by English Electric (later BAC British Aircraft Corporation) and was the only all-British Mach 2 fighter aircraft.  The Lightning was powered by two Rolls Royce Avon engines stacked in fuselage. Several versions were developed, starting with the pure F.1 interceptor. The Lightning was a real fuel burner, so the F.3 got a larger belly fuel tank and kinked wing. The F.6 was a later version with even capability to carry fueltanks on top of the wing on pylons. Several sub-variants were developed and the Lightning was used by the Royal Air Force (RAF) and the Royal Saudi Air Force (RSAF). A side a side two seater trainer was also developed. The RAF Lightnings were used until around 1988. 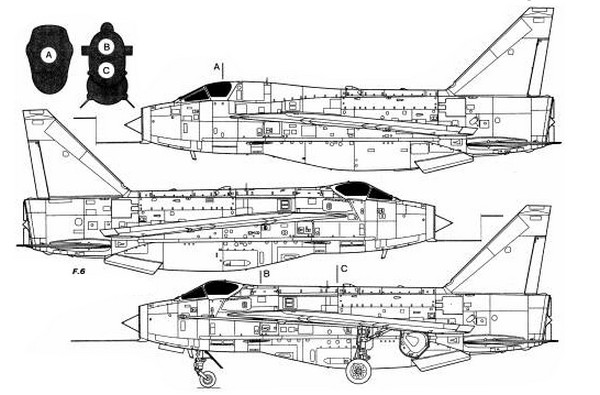 This English Electric Lightning F.53 C/N 95298 Lightning with code ZF593 is restored as an Royal Air Force aircraft. But it is in fact an ex-Saudi example, delivered to the Saudis in 1969 and serving with 6 Squadron at Khamis Mushayt and later by other squadrons. It was used until January 1986. This restored aircraft was seen at Pima Air Museum near Tucson (Az.).

This English Electric Lightning F.1 has RAF code XM135 and this aircraft was seen at the Duxford Imperial War museum (U.K).

This Lightning F.6 XR771 with RAF code XR771 first flew January 1966 and served with several RAF squadrons until 1988. It is preserved at the Midland Air Museum, near Coventry Airport, Warwickshire (U.K).

This Lightning T.55 is a trainer aircraft with side by side seating. It has code 55-713  and was used by the Royal Saudi Air Force (RSAF) from 1969 until about 1986. It is preserved at the Midland Air Museum, near Coventry Airport, Warwickshire (U.K).

Various scale models exist of the BAC Lightning interceptor. Recently in 1/72 Airfix released very good kits and other 1/72 kits are from Matchbox, Frog/Hasegawa, and later Trumpeter, Whirlybird and Sword. In 1/48 there is good Airfix kit and in 1/32 after the excellent Echelon vacuform, Trumpeter came with an injection moulded 1/32 kit. (Whirlybird has a two seat trainer conversion kit in 1/32 scale).

this walk around page was created January  2015 by M. de Vreeze ;   note the Copyright!