The DH.110 was designed by De Havilland originally for both the RAF and Fleet Air Arm (FAA) as an all-weather, missile-armed, high-speed jet fighter. The aircraft had a twin-boom tail, as used on the earlier de Havilland Sea Vampire and Sea Venom. The type was to be solely armed with missiles, rockets and bombs. The prototype first flew on September 1951 piloted by John Cunningham. The RAF chose the Gloster Javelin, but De Havilland continued with the project for the Navy, and by the late 1950s, the Royal Navy had placed an order and the aircraft entered service with the FAA. Some modifications were done and in 1957, the Sea Vixen FAW.20 (fighter all-weather) flew (later redesignated FAW.1). Mid 1959, the first of over 100 FAW.1s entered service.  The FAW.1 was armed with four de Havilland Firestreak AAMs, two Microcell unguided 51mm rocket packs and could carry four 500lb or two 1,000lb bombs. It had a maximum speed of 690 mph and a range of 600 miles. The pilot's canopy is offset to the left-hand side. The navigator was housed to the right, completely within the fuselage in the "coal hole" which had a small window.

The FAW.2 was the successor to the FAW.1 and included many improvements. As well as Firestreak missiles, it could carry the Red Top AAM, four SNEB rocket pods and the air-to-ground Bullpup missile. An enlarged tail boom allowed for additional fuel tanks and there was an improved escape system along with additional room for ECM equipment. However, the aerodynamic changes meant it could no longer carry the 1,000lb bomb. 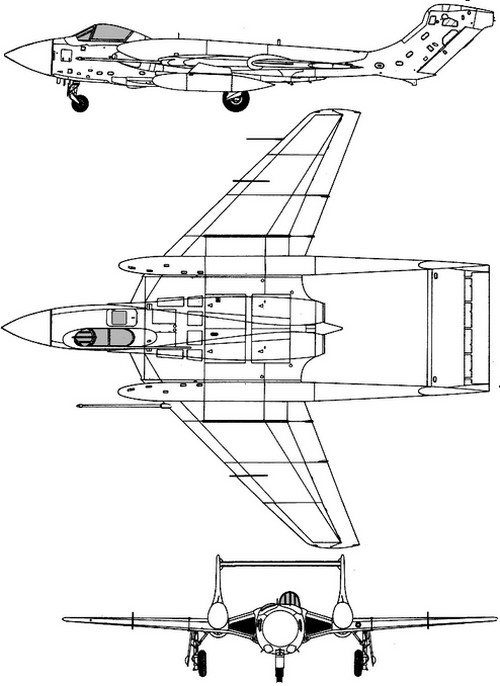 This Sea Vixen FAW2 is the same aircraft as above with code XS576 but was at that time located now at the Imperial War Museum COSFORD, UK.

This Sea Vixen FAW 2 , code XN685,  first flew in August 1962. It was used for Red Top missile trials at Hatfield, and from April 1964 with No. 13 JSTU (Joint Service Trials Unit) at Boscombe Down. Trials were completed in February 1966 and it was brought up to full FAW.2 production standard. The aircraft then served with 893 NAS on the Royal Navy aircraft carrier HMS Hermes until 1971. At the Midland Air Museum it was restored but the FAA extra dark sea grey colour is a bit too light.

In 1/72 there was a FROG kit, later released by Revell and NOVO. Later MPM released a much better kit and there is also a 1/72 CyberHobby kit. In 1/48 scale Airfix has a very nice kit.