The English Electric Canberra is a British first-generation jet-powered medium bomber from the fifties. It had wonderfull flying characteristics and putting it into service was no problem. It could fly at very high altitudes, the first aircraft capable of reaching over 60,000 feet, highly classified at the time. The USAF also wanted the type and the American Martin company manufactured the Canberra in license with over 400 aircraft made. Martin also did some significant changes like the tandem cockpit arrangement. Several variants were manufactured not only as a bomber but for many roles also by the later British Aircraft Corporation.

It was sold to various air forces all over the World: U.K, Australia, Argentina, Chile, Ecuador, Ethiopia, France, India, New Zealand, Pakistan, Peru, Rhodesia, South Africa, Sweden, Venezuela and West Germany! The type served in the Suez Crisis, the Vietnam War, the Falklands War, the Indo-Pakistani wars, and numerous African conflicts. The USAF used the B-57 in Vietnam also in the night bombing role and ECM roles. 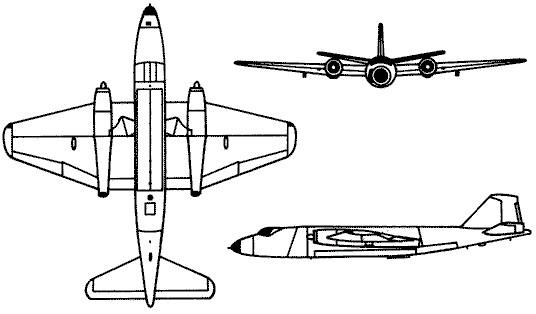 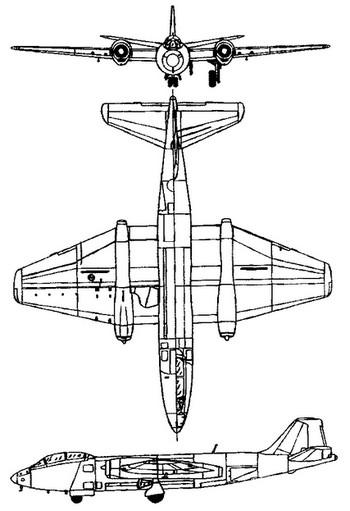 This EB-57E-MA coded "55-4253" was a converted B-57 for electronic warfare. Various antennas are seen on the airframe. This aircraft is on loan from the USAF museum and was seen at the Castle air museum at Atwater, Ca. , USA.

A selection of mostly RAF Canberra's seen at European air shows in the nineteen seventies.

Several model kits exist of the Canberra and B-57. The old Airfix and Frog kits are for Canberras in 1/72. Revell USA had a B-57. Matchbox came with nice 1/72 Canberra  PR9 which was also issued by Revell. Now Airfix has a good 1/72 Canberra and Italeri a nice B-57. In 1/48 Airfix has a good kit as well and Amodel has a number of 1/144 kits. No 1/32 scale injection model is known though there was a rudimentary ID vacuform.

This webpage was first created July 2015 by M. de Vreeze