The Dassault/Dornier Alpha Jet was developed end nineteen-sixties as a light attack jet and advanced trainer aircraft. It was a cooperation between Dassault Aviation of France and Dornier of Germany. The first aircraft flew in 1973 and production started end seventies with several hundred aircraft manufactured. France used it as advanced trainer and also the Patrouille de France aerobatic team of the French Air Force fly the Alpha Jet. The Luftwaffe used the type in the light strike role with also some weapons training. French planes feature a rounded-off nose and German Aplhajet have a sharp, pointed nose. The Alphajet was also widely exported to countries like Belgium, Cameroon, Egypt, Morocco, Nigeria, Portugal, Quatar, Thailand, Togo . 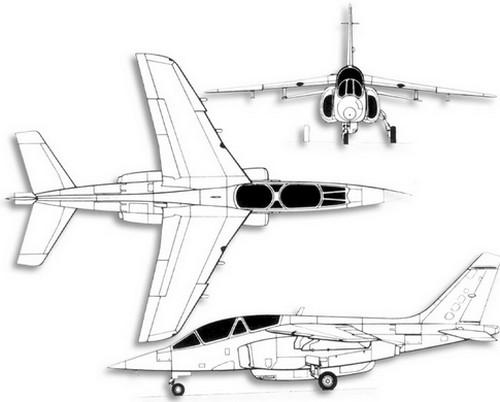 This Alphajet 1B is of the Belgium Air Force which was delivered in 1979. Some training is done in France. This aircraft was photographed at Volkel AFB in 2012.

Several models in various scales have been issued of the Alphajet. In 1/72 scale Airfix and Heller /Revell have models as well as Matchbox. Kinetic has a very nice 1/48 scale kit.

This walk around page was first published January 2016 by M. de Vreeze